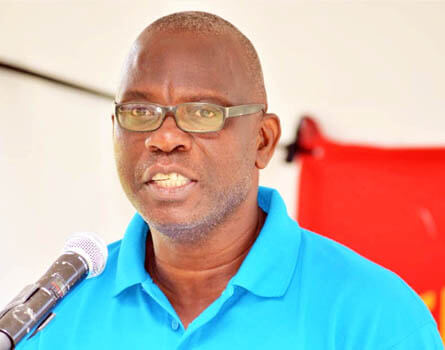 General Secretary of the Bank & General Workers Union (BGWU), Joseph Mitchell has sent out a strong message to Prime Minister Dr. Keith Mitchell and his ruling New National Party (NNP) administration on the need to honour the recent high court decision handed down by Justice Raulston Glasgow for public sector employees to be paid pension due to them for the past 40 years.

Speaking to workers at the annual Labour Day celebrations on Sunday at the national sports stadium at Queen’s Park in St George, Mitchell dropped hints that any failure to honour the ruling could spill trouble on the industrial front in Grenada.

He said that BGWU stands united on the pension issue with the three public sector unions involved in the struggle – the Public Workers Union (PWU), Technical & Allied Workers Union (TAWU) and the Grenada Union of Teachers (GUT).

“We support the fight for the pension benefits of all public sector workers,” he told workers who assembled at the stadium after marching from the Foodland car park on the Lagoon through the streets of the city and into the stadium.

“We call on the government to adhere to the court ruling and to immediately proceed in paying the pension,” he said.

Justice Glasgow struck down the Pension Disqualification act that was passed by the 1979-83 left-leaning People’s Revolutionary Government (PRG) of slain Prime Minister Maurice Bishop as “null and void” and in contravention of the 1974 Grenada Constitution which provides pension for qualified civil servants.

The Mitchell-led government has announced that it will not appeal the ruling of the judgment which can cost the government over half-a-billion dollars in immediate pension payments to public sector employees.

BGWU’s Mitchell also took issue with the attack on PWU President Brian Grimes by officials of the NNP regime on a political platform for not showing up along with other union leaders to a recent meeting involving Prime Minister Mitchell and other stakeholders to discuss the ramifications of the court ruling on the country especially other workers like Imanis, Debushers and Traffic Wardens.

The trade unionist rejected the attempt by government to brand Grimes as being irresponsible.

He said that “the only irresponsibility that we have in this is for the government to continue to deny the workers pension.”

Mitchell also ripped into government’s decision to set up a five-member committee headed by former Permanent Secretary in the Ministry of Finance, Dr. Linus Spencer Thomas to look at the Pension issue and submit a report in 3-months for consideration by the Cabinet of Ministers.

He said: “We believe that using delay tactics on this matter is going to further frustrate the whole pension issue. There is no need for any committee. They have had 30 years to put a committee in place – so why now? We call on government to ease the tension and pay the pension.

Mitchell also addressed the critical issue of those workers who have been laid off from workplaces especially in the tourism sector and St George’s University (SGU) for refusing to take the Covid-19 vaccine in the fight against the deadly virus.

He noted that although government did not send home any of its employees, it stood idly by and allowed these workers to be sent home in the name of restarting economic activities in the country.

“We call on the government – if you truly care about the people – to ensure that these workers are re-instated in their jobs,” he said.

Mitchell also touched on government’s failed attempt to commercialise state-owned estates which started in 2015 by handing over some of them to private sector concerns.

He noted that it was done on the promise that the new ownership structure of the estates will lead to employment opportunities especially in the rural parts of the country.

“Sad to say Sisters and Brothers, what we have seen today is a total decline in the agricultural sector and in particular these government-controlled estates,” he said.

According to Mitchell, employment on the estates have declined from 20 plus odd workers to only a trickle.

“We are calling on government to engage in sustainable agricultural production that will benefit the rural communities.

One of the estates that eventually collapsed was given to a group of revolutionary prisoners who were convicted for their roles in the execution of Prime Minister Bishop following a bloody conflict between hardliners and moderates for control of the 1979-83 Grenada Revolution.

The BGWU official also attacked the policy of the Mitchell-led government to turn to contracts in handing out employment to persons on the island.

He said the BGWU sees this form of employment as “the major enemy to the working force” and called on government “to end this short-term contractual arrangement and give workers full time employment.”