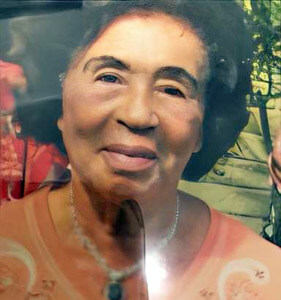 Mrs. Veronica Benoit Nee Hagley
Many may remember the Benoit family estate located near the Sugar Mill Roundabout being extravagantly lit up every Christmas season with thousands of festive lights and inflatables. This spectacular display of lights attracted visitors, by the bus loads, from across Grenada to view the beautiful exhibit and became a much-anticipated treat over the Christmas holidays.

Monica Benoit devotedly built the iconic holiday displays on the Benoit family estate between the years 1998 and 2011. Bringing joy to so many, particularly during the festive season, was a passion of Mrs. Benoit, the matriarch of the Benoit family.

The display became such a welcomed holiday feature that Grenlec and the Government of Grenada supported the efforts of Mrs. Benoit and her family with various concessions in order to light the estate each year. Unfortunately, after 2011, the display was suspended due to electrical cables being stolen which prevented Mrs. Benoit from lighting the estate.

All was not lost however. In 2008, the Rotary Club of Grenada began hosting its annual signature fundraising event, Carols by Candlelight (CBC). In 2015, the Club asked Mrs. Benoit to loan her lights to the Club for the lighting of Quarantine Point Recreational Park which became the home of the Carols by Candlelight event.

Mrs. Benoit was extremely happy to donate the lights to the Club in support of CBC as she enjoyed seeing persons enjoy the display that brought her so much joy for many years. Since then, every Christmas, Mrs. Benoit and her family have supported the Rotary Carols by Candlelight event by continually donating lights to improve the display, patronizing the fundraiser event and extending the light display through to January so park patrons can enjoy the lights for a longer period throughout the season.

In June of 2022, sadly, Mrs. Benoit passed away only a few short weeks before receiving Rotary’s Paul Harris Fellow Award in recognition of her significant contribution to the Clubs humanitarian and educational programmes. This is the highest accolade awarded by the Rotary Club.

Despite the passing of their matriarch, the Benoit family have remained committed to continuing her tradition and legacy of lighting Quarantine Point Recreational Park. In remembrance of her, the Benoit family will feature its largest and grandest light display ever, which will be unveiled at this year’s Carols by Candlelight on Sunday 4th December.

“Our mother was very passionate about family and giving back to the community. With the lighting of our family estate and subsequently Quarantine Point Recreational Park, she found a unique way to honor the spirit of the holidays using the beauty of the lights to bring the community together. As a family, we are truly delighted to continue this tradition which is so important to us”, said her daughter Joan Ashby.