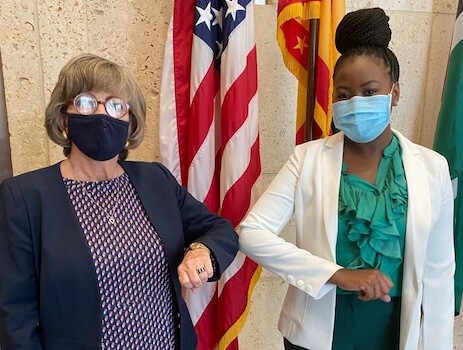 U.S. Ambassador Linda Taglialatela meets with Grenadian Larissa Mark (right), prior to her departure to the United States

The U.S. Embassy to Barbados, the Eastern Caribbean, and the Organization of the Eastern Caribbean States is pleased to announce the Fulbright Foreign Student Scholarship recipients for this academic year. Grenadian Larissa Mark has travelled to Omaha, Nebraska to begin graduate-level studies in Epidemiology at the University of Nebraska Medical Center, funded by the U.S. Government.

Prior to accepting the Fulbright Foreign Student Scholarship award, Ms. Mark was employed by Sandals Grenada Beach Resort and Spa as an Environment, Health and Safety Manager. In 2018, Mark completed a Bachelor of Science degree in Biology from the St. George’s University and in 2013, she completed a Master’s in Public Health with an emphasis on Environmental and Occupational Health.

The Fulbright program is the flagship international educational exchange program sponsored by the U.S. government, and is designed to increase mutual understanding between the people of the United States and the people of other countries. The Fulbright Foreign Student program enables graduate students, young professionals, and artists from abroad to research and study in the United States for one year or longer at U.S. universities or other appropriate institutions.