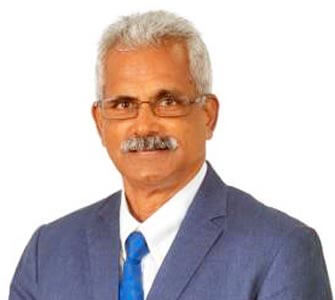 As District Governor, all Rotary and affiliated Rotary clubs in the southern Caribbean – from Antigua to Suriname – will look to him for leadership, support, and motivation as they carry out service projects and participate in programs. Leslie was nominated for the position in 2021 and was met with overwhelming support throughout the region.

To many, becoming District Governor is the natural progression for Leslie’s Rotary career, as he has been a dedicated member of the organization for 45 years. His Rotary journey began as a chartered member of the Rotary Club of Grenada East in October 1977. Since then, he has served as President, Secretary, Treasurer and on other club committees on numerous occasions.

At the District level, he has served as the Chair of several committees and has been elected as the Assistant Governor on five occasions. He has also fully embodied the Rotary mantra of fellowship through service, through his almost perfect attendance and active participation at District Conferences and Rotary Conventions. To date, he has received multiple Paul Harris Fellow awards and is also a Paul Harris Society Member and a Benefactor.

When asked to comment on the significance of his installation, Leslie humbly stated, “It truly is an honour and a privilege to be the Rotary District 7030 Governor, representing over 3000 Rotarians, Rotaractors and Interactors.” He continued by sharing his vision for his tenure, “It is my goal to encourage clubs to create an atmosphere of comfort and care for their members and to extend that philosophy to our community. This will allow everyone to feel welcomed and willing to participate in our efforts that improve lives. We must be recognized as people of action who are doing good in the world.”

When not engaged in Rotary work, Leslie is actively working in his family business – Ramdhanny & Company Ltd – where he has been Chairman for the last 47 years.  Despite having a busy schedule, Leslie has also served on several private and public sector boards.

Leslie ascending to the top leadership position of the District is monumental to both the Rotary organization and Grenada. As such, nine former District Governors from across the region will be arriving in Grenada to attend the in-person installation. The formal ceremony will be held on Saturday, July 16th at the Radisson Beach Resort. The event will be attended by the Governor General, Her Excellency Dame Cecile La Grenade and the newly elected Prime Minister The Honourable Dickon Mitchell.

Rotary District 7030 consists of 73 clubs in 17 countries and encompasses a variety of cultures and languages. Leslie aims to continue his active participation in his local club while executing his duties as Governor of District 7030.