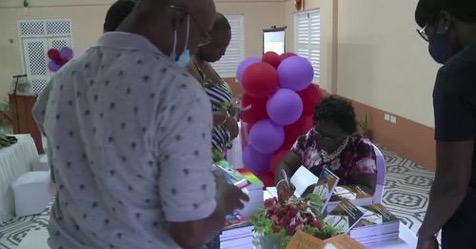 Three new books have been added to the collection of books written by Grenadians and available for public consumption. The books written by Ms. Laurel Bain and Mrs. Gemma Bain-Thomas both from the parish of St. David were launched on Wednesday 25th May 2022 in a ceremony held at the Canal, Bailles Bacolet, St. David.

The books unveiled are titled Fiscal Policy in the Eastern Caribbean Currency Union – Evolution, Challenges and Opportunities and Budget Alert: Fiscal Policy Issues in Grenada for 2021 by Laurel Theresa Bain and Unconstitutionally Removed by Gemma Bain-Thomas.

The Book: Fiscal Policy in the Eastern Caribbean Currency Union provides a comprehensive analysis of the fiscal policy pursued in the Eastern Caribbean Currency Union (ECCU) as the countries experienced political, social, and economic changes.  It is anchored in the historical development of the ECCU.  It examines the fiscal developments from 1945 to the 1960’s and analyses the developments in the decades of the 1970 to 2000 in the context of the growth performance of the countries operating in the ECCU with a common monetary arrangement.   The book documents the approach to fiscal management adopted from 2000 and probes into the challenges of fiscal policy in the ECCU during the latter part of 2000, particularly with the onset of the financial and economic crisis. It then traces the recovery of the economies after the financial and economic crisis and the response to the unprecedented Covid-19 induced global recession. The fiscal policy pursued is examined in the context of a currency union with one Central Bank and a common currency.

This book would be of benefit to students of public finance, academics, practitioners, and citizens with interest in public finance. It is published under the theme: Knowledge is power, and experience is the greatest teacher.

The highlights of Budget Alert: Fiscal Policy Issues in Grenada for 2021 were presented by Dr. Juliet Melville a former Chief Economist and Acting Director of Economics at the Caribbean Development Bank.  This book emerged from the radio programme “Fiscal Alert” hosted by the Bain Sisters on the late George Grant’s Monday morning show – “Gudday Grenada”. The weekly programme sought to explain complex and topical development issues to the average listener. The emphasis was on informing, explaining to, and educating the public about important development concepts and issues in simple straightforward language. The focus was on fiscal policies and other economic and social issues pertinent to Grenada.

Following the death of George Grant Budget Alert was produced and published in the local media as a source of credible, reliable, and useful information on economic and fiscal issues in Grenada.  The book aims to make government fiscal policy understandable to the average Grenadian and to equip the general public with information and knowledge so that they can better appreciate, understand, and raise questions about government policies and pronouncements.

Budget Alert is intended to create among citizens a state of being fully aware and attentive, wide awake, keen and a mechanism to advise, warn or cause them to be on guard or aware of some development that may adversely impact them.

Unconstitutionally Removed by Gemma Bain-Thomas chronicles her experiences growing up in a little-known village in Grenada; going on to obtain university-level education, entering the Public Service of Grenada, and rising through the ranks to hold the constitutional office of Secretary to Cabinet; the highest post in the Public Service.  She was later purportedly transferred from that constitutionally held office to a lower position, an unestablished post created by an Act of Parliament. Thereupon, she was forced to pursue legal actions to establish the unconstitutionality of the purported transfer.

The book details the legal issues ventilated in the court system over an almost five-year period and is geared towards public administrators, students of government, public policy, management, legal and paralegal students, and citizens in general who should be enabled to appreciate the primacy of the Constitution in public management.

In delivering the feature address Dr. Roxanne Brizan-St. Martin, Economist and the niece of Laurel Bain and Gemma Bain-Thomas spoke on Good Governance: Two Sides of the Same Coin. She noted that the authors have challenged the status quo in terms of what is most times accepted as good governance. Their writings address issues of good governance from two different angles: Public Administration and Economics.  She states:

Through the work of these heroines, we recognize the vital role of citizen participation in good governance. The people, their concerns and issues should be at the centre of the dialogue which would help strengthen the public policies that are meant to serve them. It means equipping the people, empowering them to recognize and promote their own needs and rights and more so promoting spaces for their active participation. Therefore, for good governance to prevail there must be:

I am proud of you both and I can only hope and pray that we as younger professionals can be as mindfully resolute and unswerving as we navigate our professional lives. Through these books, you have done your part in forcing the hand of good governance, ensuring that as citizens we honour our rights and our role in improving the quality and sustainability of our democratic societies. Through these books you have contributed to inter-and-intra generational knowledge sharing and knowledge transfer and for that you are recognized, acknowledged, and celebrated.

…..While these books highlight the importance of good governance in the form of fairness, transparency, accountability, rule of law, a key take away is that we can choose resolve or resentment. Resentment in the form of anger, resentment in the form of ignoring issues or letting things “crash and burn” does not contribute to the common good. Instead, our resolve should be to be purposeful in our active participation in issues which affect us, building awareness and advocating for our rights.

Remember Knowledge is Power, Knowledge Shared is Power Multiplied and Experience is the Greatest Teacher.

Ms. Laurel Theresa Bain is an Economist who served for over twenty-five years at the Eastern Caribbean Central Bank and Mrs. Gemma Bain-Thomas a former Secretary to Cabinet in the Public Service of Grenada.