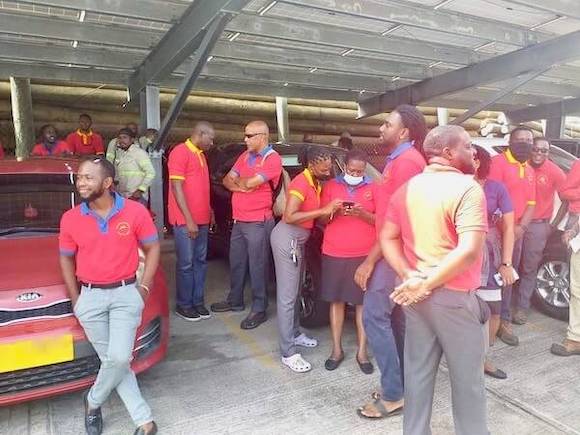 A source at the company told THE NEW TODAY that most workers on the mainland as well as on the sister isle of Carriacou downed tools this morning on orders of the Technical & Allied Workers Union (TAWU), which has turned down offers to arrive at a new industrial contract with the utility company for salary increases and fringe benefits.

She said that mainly supervisory staff and those attached to the Customer Care division are currently on the job and that the strike action could impact the island’s major power generating plants at Queen’s Park in St. George.

THE NEW TODAY understands that most of the Grenlec employees on strike – administrative staff, truckers, linesmen and power plant workers – are currently assembled at the company’s car park at its Dusty Highway location in the south of the island.

The company’s Bruce Street Customer Service office in the city is open at the moment with employees collecting monthly payments from customers for use of electricity.

TAWU has submitted proposals for the 2018-25 period which Grenlec claims will cost the company in excess of EC$80 million dollars.

The state-owned utility is said to have offered counter-proposals ranging between 1.5% to 2.5% and amounting to EC$10.8 million in salary increases and fringe benefits for the workers.

THE NEW TODAY was told that TAWU is specifically demanding salary increases of 7-10% for some employees, an increase in the profit-sharing arrangement from 13% to 25% of the company’s profit, as well as a number of fringe benefits that can run in the vicinity of EC$80 million dollars to the workers over a 7-year period.

TAWU is also believed to be demanding significant increases in displacement allowances for those workers who often leave the mainland to go to the sister isles of Carriacou to work, as well as allowances for uniform, severance pay, leave pay and contributions to the Provident Fund.

In addition, the union is also making demands for meter readers to get an increase in salary from $1,200 a month to $3,000 and is seeking to introduce some new issues into the industrial agreement contract covering travel allowances for workers between the various branches of Grenlec like Dusty Highway in the south of the island to its office at Bruce Street in the city and to Grenville.

As early as Friday, TAWU had instructed the workers who operate in the out-parishes to return to base and park up all their vehicles.

On the same day, Labour Commissioner Cyrus Griffith summoned both sides to meet with him at 3.30 p.m. Monday to try and resolve the issue.

“I don’t know what is going to happen with his meeting now,” said the source as he pointed to TAWU’s strike action.

The workers were also heard on the Grenlec compound this morning saying that the country better prepare to return to the days of candle light to light their homes at night as the workers are determined to get their demands for wage increases and improved fringe benefits and were not afraid to put the country in blackout.

There are reports that TAWU leadership is entitled to a certain percentage of the profit-sharing given by the company to workers.