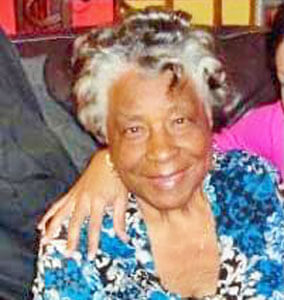 It’s crazy, such a tragic way to die.

Those words came from a close relative of the two persons including a 93-year old female who died in tragic circumstances Wednesday night in a devastating house fire in Madeys, St Patrick in which Police are trying to put together the pieces.

THE NEW TODAY understands that the lawmen are looking at the possibility of a possible homicide in one of the deaths.

Within minutes of the fire, Police detectives detained the son of a retired female Sergeant of police for questioning in connection with the incident.

According to a well-placed source, the suspect told police officers that he had an altercation with one of the fire victims, Nico Duncan, the son of the elderly lady, Germaine Duncan who is known to be able to move around the house with the aid of a walker.

The suspect claimed that Nico struck him with a piece of wood in his abdomen and he retaliated by stabbing him with a knife.

The police investigators also picked up information from the suspect that the injured Nico, a security guard by profession, then got into his car and sped away from the scene.

Moments later, residents heard a loud explosion and saw the house in which the bed-ridden elderly citizen was living, totally engulfed in flames.

Neighbours informed police investigators that they heard a car banging into the house, and later observed fire coming from the car that eventually caused the house fire.

A well-placed source said that the house has a wooden floor and that might have helped the fire to spread quickly throughout the entire building.

One neighbour said Nico remained in the car when it came to a stop and his mother was in the upstairs section of the house when it was engulfed in fire.

A family member denied reports circulating that Mrs. Duncan was bed-ridden and could not move as the fire swept through the house.

“She was not bedridden. She had limited mobility. She could have moved around with a walker. The housekeeper/caretaker who was in the house at the time, as well as her nephew, tried to rescue her from the top floor but the smoke was too thick and stifling. They were choking because of the smoke and could not attempt to rescue her anymore,” she said.

The family member also shed some light on reports that after the stabbing incident, the victim jumped into his car and sped away.

She said: “Uncle Nico did not speed away, as if he sped away from a crime scene.

What happened was that he drove very fast up the hill to the house and crashed. He was literally only a few seconds away from the house when he sped away. It is (believed) that he may have died from the stab wound in his neck just before crashing into the wall of the house. It is also said that the weapon used was not a knife but a stingray bone.”

Residents in the area have spoken highly of Mrs. Duncan, who was a sister to late medical doctor, Lloyd Alexis.

The aged lady was described as “a church-going woman” whose deceased husband was a Deacon in the Roman Catholic Church.

Another neighbour told THE NEW TODAY that Mrs. Duncan was very much looked up to by all in the neighbourhood who considered her to be nothing but a role model for persons living in St Patrick.

The US-based daughters of Mrs. Duncan were said to be in an advanced stage of planning a trip to Grenada around the middle of the year to celebrate her 94th birthday.

A friend of the family said that he was contacted to help identify a house for the overseas family members in order to make the occasion a memorable one.

“I arranged a place for them to stay,” he said, adding that everything will now have to be shelved in light of Wednesday night‘s tragic event.

The RGPF has also issued the following statement on the incident:-

“The general public is informed that officers along with the Fire Department of the Royal Grenada Police Force (RGPF) responded to a house fire at Madeys, St. Patrick, where two (2) residents, a 94 years old female and 60 years old male, passed.

The incident occurred sometime after 6:00 p.m. on Wednesday 2nd March, 2022. It is alleged that the fire may have started from a vehicle explosion that eventually caused a two-storey wooden and concrete house, and a motor vehicle to be destroyed.

The Commissioner of Police along with the Rank and File of the RGPF express deep sympathy to the family and relatives of the deceased.

The public is assured that a full-scale investigation has been launched into the circumstances surrounding the tragic and unfortunate event.

One person in custody assisting police with investigations.”