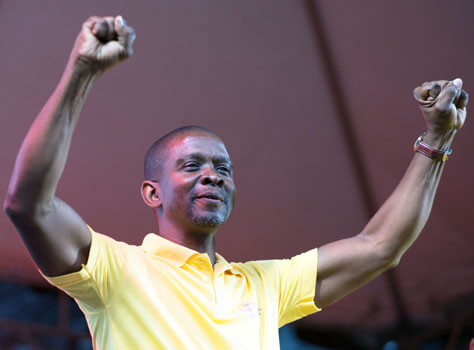 With statistics showing that Grenada has a very youthful population, both the ruling New National Party (NNP) of Prime Minister Dr. Keith Mitchell and the main opposition National Democratic Congress (NDC) of Dickon Mitchell are targeting them for the upcoming general election.

The Congress leader, 44 year old attorney-at-law Dickon Mitchell has been attempting to woo the youth vote by selecting a number of youthful faces to contest the election on tickets of Congress.

The newly elected NDC boss has also been hammering out the high unemployment among the youth at around the 50% level.

Addressing the launch of the four (4) NDC candidates to contest the seats in St. Andrew, former acting Chief Education Officer (CEO) in the Ministry of Education, David Andrew said that the party has a plan to tackle the issue of unemployment among the youth and youth under-employment.

Andrew who will be contesting the St Andrew South-east seat against his former boss, Education Minister Emmalin Pierre told party members and supporters at the launch meeting at Carlton Junction that the intention of Congress is to introduce concepts through a plan to curb the dependency syndrome in the country.

Although he did not elaborate on the initiative that NDC plans to roll out to address the issue, the candidate said, “We will improve access to education in terms of lowering the cost for education”.

According to Andrew, priority will be given by a Congress administration to tackling in a serious way, as well as improving and upgrading “the structure of our education system in the country.

We need to do that because too many of our young people have been denied the right to educate themselves and this is crippling our country by increasing the question of childhood poverty and we need to stamp that out once and for all.

We would like for each young person to come forward to be part of our organisation and to demonstrate leadership.

We open that avenue for you and we are saying to each and every young people in Grenada, Carriacou & Petite Martinique join our organisation and come forward to lead.

Grenada is a good country, Grenada has the potential to build itself but we need the right leaders to be elected in order to do so. We therefore ask you to support the National Democratic Congress.

We would ensure that we bring to you the vision that will be most important which will help each and every one of the Grenadian youth to realise their full potential under a National Democratic Congress government. We believe in the Grenadian dream and we want to sell this to you 120%.”

The NDC has been engaged in a rebuilding process after suffering 15-0 loses at the polls in 2013 and 2018 to Dr. Mitchell’s NNP.

The Prime Minister has sounded an ominous warning that he does not intend to surrender any seat in the upcoming general election which could be called anytime soon as he has “the bell” in hand to ring it.