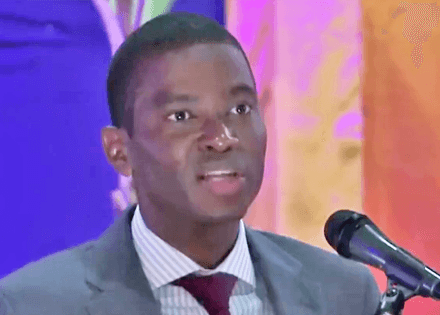 44-year old attorney-at-law Dickon Mitchell has taken the political landscape in the Spice Isle by storm with his sudden and unexpected rise to the top post of Political Leader with the main opposition National Democratic Congress (NDC).

Prior to last month’s convention of Congress when he defeated two other contenders for the post, little was known of the baby-faced looking youngster from Petite Esperance in St. David who attended Presentation Brothers College (PBC) in the city and then studied law at the Cave Hill campus of the University of the West Indies (UWI).

However, a close aide told THE NEW TODAY that the young Mitchell, no relation to current Prime Minister Dr. Keith Mitchell, the man whose job he is trying to take away from him in the upcoming general election, has been plotting his political moves for over a year.

Dickon Mitchell was not even born when Prime Minister Mitchell had his first brush in local politics as a 26-year old candidate of the now defunct Grenada National Party (GNP) of late Prime Minister Herbert Blaize and lost the battle for St George North-west seat against Finance Minister George Hosten of the all-conquering Grenada United Labour Party (GULP) of the Father of Independence, Sir Eric Matthew Gairy.

According to an insider, the very reserved and often shy-looking barrister-at-law was engaged in talks for several months in 2020 with current Opposition Leader Tobias Clement who offered him a Senatorial position which he did not accept.

He spoke of Dickon Mitchell turning it down on the grounds that he was the Honorary Consul for The Netherlands in Grenada and did not want to compromise the diplomatic position.

A confidential source said that the Dickon Mitchell/Tobias Clement engagements often took place at a private home in the St. Andrew South-west constituency.

“Dickon is in the Grenville area mostly on Saturday with some friends up here,” he said.

According to the source, he is aware of the two of them holding meetings for “about three consecutive weekends” discussing the politics in the country and a role in the Senate.

“He (Dickon Mitchell) said he’s going to think about it – in the end he said he can’t take it because he would have to give up that Netherlands thing to take up that position,” the insider told THE NEW TODAY.

He pointed out that when the Opposition Leader expressed an interest in forming a political party, Dickon Mitchell was among persons who attended the closed door sessions in the St. Andrew base.

He said that most of the talks used to be held over “a little drink” and focused primarily on the political situation in the country.

He quickly formed the impression that “Dickon Mitchell is up there every weekend meeting with these close advisors” while the Opposition Leader “tried to start his thing from there”.

“Dickon and his group used to meet there by (name withheld) and continued to hold sessions with her. I don’t know where Tobias got the link to Dickon from – if it’s through her but they ended up meeting up there in her place to discuss these things,” he said.

The insider disclosed that Dickon Mitchell was given the task among other people by the Opposition Leader to help write the Constitution for the party in the making.

“There was somebody else who was given the task to organise the party. Dickon said he would help with the Constitution,” he said.

The well-placed individual revealed that things fell apart when Clement admitted to a local reporter that he would form a party and that some members of the group felt he was too premature in giving out details.

He said that some of the persons who were engaged in the discussions soon “ran for cover” because they didn’t want that information to become public knowledge so soon given the nature of their jobs.

“After that collapsed, (the group) stopped meeting on weekends to discuss politics and formation of a party,” he added.

The insider indicated that things then shifted from the St. Andrew location to Dickon Mitchell’s law firm at Excel Plaza in the south of the island.

He said that every Friday afternoon, a few persons no more than 5 would meet in Dickon’s office to discuss politics and one of the attendees was Garvin Pierre who landed a position on the NDC Executive.

“I know that these people used to just go there and used to just talk about politics and the state of the country and what’s going on and stuff like that.

“I didn’t know what their intention really was about – I know they were trying to form a group”.

He quoted one of the five as saying that he was not deeply involved since he just used to “go there and listen”.

“The only thing I find Dickon tends to speak 90% of the time you are there in a meeting with him … he didn’t give you a lot of time to speak,” the source quoted one of the persons involved in the discussions as saying.

According to the source, after a period of time the Dickon Mitchell group had ceased having these meetings or might have continued without the involvement of his close friend.

In looking ahead at Dickon Mitchell’s involvement with Congress, he said that he formed the impression that the female political activist in St. Andrew will be a major player in his ambitions to lay his hands on the job of Prime Minister of the country.

“…He does be in Grenville very regularly by some friends up there. I think they are the ones who appear to me that will be advising him.

The source identified the key person around the new NDC leader as a former top civil servant with a background in the tourism sector.

THE NEW TODAY understands that this female political activist played a key role with Congress in its 2008 victory at the polls against Prime Minister Mitchell and his NNP group.

A political observer on the island has warned that the ageing Grenadian leader should not take Dickon Mitchell’s challenge lightly as his intention is to replace him in the important office on the 6th Floor of the Ministerial Complex at the Botanical Gardens in Tanteen, St. George.

He said: “I am at a birthday function in Mt Hartman and the popular words are, “I AM SUPPORTING DICK.” Both NNP and NDC seem to love the guy. There are about 50 people attending and the women are stressing I love DICK. My friend KCM (Keith Claudius Mitchell) better hope the Dick does not spread like wild fire.”

Dickon Mitchell is apparently looking at the St David constituency in the upcoming general election to do battle against Foreign Minister Oliver Joseph.