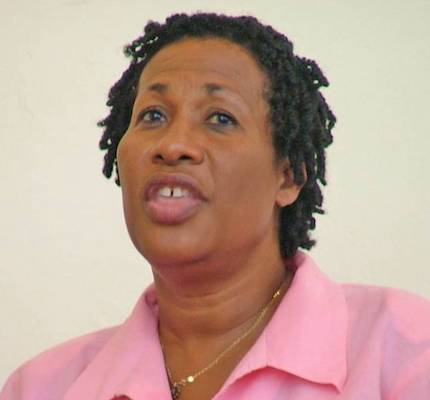 Ambassador Claris Charles - under scrutiny from Grenadian students in Cuba

Ambassador Claris Charles who has apparently taken leave of absence from her job in Cuba has come in for more heavy criticisms from students in Havana over her alleged lack of performance.

A student leader told THE NEW TODAY that in the face of growing food shortages in Cuba several of them would like to see Grenada follow in the footsteps of other Caribbean islands like Guyana, St Lucia and Dominica and help students with getting barrels with food items from out of St. George to help them out.

She accused Ambassador Charles of not willing to put “in the work for us to get those barrels so she (is) coming up with excuses that it go spoil” but this is not the case with barrels coming from other islands in the region for their students in Cuba.

The student admitted that with the coronavirus pandemic taking a toll on the communist island, the Cubans are rather slow in processing the paper works for barrels which can take up to five months to clear but they are prepared “to wait” it out.

About 35 of the 70 Grenadian students in Cuba have reportedly expressed interest in getting barrels shipped out to them from Grenada but nothing came out of it.

The student cited Ambassador Charles for “trying to make excuses” for her non-performance in some areas of her work in Cuba.

She also addressed a statement attributed to the female envoy last week that it was better for parents to put cash on their debit or credit cards so that food items can be purchased through an agency.

According to the student, the packages have to be ordered and purchased in Euros and this is not a good deal for students given the high exchange rate involved.

The student leader alleged that Ambassador Charles often gives priority to those Grenadian students in Santiago who often get to purchase items first and by the time the other Grenadian students are able to place an order the item is no longer available.

She also slammed Ambassador Charles for suggesting that monies should be put on the cards for students instead of the idea of sending barrels.

“There is nothing to buy in Cuba,” she said.

The student also told THE NEW TODAY that whenever they go to buy in the Cuban stores, they do not pay in cash but the money is taken out in US currency on their debit or credit card and the banks in Grenada usually impose a large fee for doing business in Cuba.

In addition, she said the fact of the matter is that a lot of parents of students in Cuba are also struggling to make a living and cannot always put money on the cards for them.

This, she said is one of the primary reasons why the students prefer barrels from Grenada rather than going through the hardship of living up for food items in the Cuban stores.

According to the student, the foodstuff sent in barrels will last for a considerable period of time some time and they will not have to always go to hustle for food in these long lines in Cuba.

She said that due to the attitude of Ambassador Charles, the students made a direct approach to Education Minister Emmalin Pierre who played a pivotal role in helping them get a special relief package of US$600.00 from government on top of the US$1500.00 a year subsidy given by the State.

The student lamented the fact that they have to go into long lines for up to 12 hours to get into a store and at times when they do enter the place is already cleaned out.

According to the student, both Ambassador Charles and her granddaughter who is also studying in Cuba do not experience what the average Grenadian student has to go through in order to purchase food items as they shop at specially set aside stores for diplomats in Havana.

She singled out Guyana as one of the countries in the English-speaking Caribbean that look after its students in Cuba.

She said that Guyana has been sending hampers and have also increased the stipend given to their students especially since the coronavirus pandemic hit the communist Caribbean island.

She mentioned that over 70 barrels came from St Lucia for students and a lesser amount from Dominica for its students in Cuba.

The student indicated that although the barrels from St Lucia took up to 5 months to be cleared on the port in Cuba, no losses were experienced from the contents inside.

She pointed out that students from South Africa and Namibia get either monetary assistance or hampers from their governments.

She said that there are Grenadian students who are still interested in barrels from their homeland.

According to the student before the Cuban economy was hit by inflation in recent months, it was affordable to visit some Cuban restaurants at the personal homes of people and get a plate of food for just over US$1 but presently that is now being sold for US$6

Students, she said, just cannot spend that kind of money every day so they are forced to take whatever the school provides for them at the cafeteria.

The students claimed that the rice at the cafeteria is not cleaned properly on some occasions and at times one can find a stone or fly the meal that is prepared for them.

She said that those students who are now in Grenada and are expected back in Cuba for the resumption of university classes in September will be allowed only one suitcase with 50 lbs of items.

In addition, those students who are fortunate to travel to the United States to shop are allowed two suitcases with 100 lbs of items to carry back to Cuba and that can only last for a few months.

The student also addressed Ambassador Charles’ statement that some students returned home on charter flights in the face of the worsening coronavirus situation in Cuba.

She said this is not a cheap venture but is an expensive one for students as a “Charter flight is not cheap,” and costs each student around US$1000 plus for a ticket.

She stated that a lot of students did not go home on the charter flight because they could not afford the cost of the ticket.

“Those who went home were fortunate to pay that money – a lot of them were also students who had already finished and were not returning to Cuba,” she remarked.

The student also made mention of a problem often encountered at the hands of Cubans who often engage in profiteering on scare items in the supermarkets.

She said a Cuban will buy the item even though they do not need it and will then turn around and sell it on the black market at an exorbitant price.

“There was a situation that I did not get chicken in the store – it was chicken legs, it was a 3lb bag and it cost US$7.00 in the store and it was finished by the time we got there but the Cubans were selling it for US$40.00 on the black market)”.

She also said that if a person buys in a store on Monday then that individual cannot go back to purchase items within the next 7 days.

“So even if you want another of the items you have to wait your turn and that is how you lose out on purchasing another much needed item. They have people in the store checking on the ID cards of persons who enter plus they keep a record of one’s credit or debit card.

“You will not be able to join the line after they process you and realise that you purchased items in the supermarket within the 7-day period.

The student cited the case of milk which is sold in the store in Cuba at US$2.15 a tin but will cost US$6.00 on the black market.

“The last time we priced a box of milk it was over $10.00 US on the street from a Cuban because it doesn’t have in the store,” she said.

In addition, some of the Cubans travel to other provinces and purchase items to bring back into Havana to sell for huge profits.

THE NEW TODAY understands that a regular bottle of oil in the store is sold for US$6.00 but on the black market it is US$24.00.

The student also mentioned the poor state of the meals offered at the cafeteria on the school compound.

“Sometimes when meat is offered it is spoiled and you have to try and force it down into your stomach. You have to force it down as there is nothing else for you to eat. It’s tough – a lot of people do not understand,” she quipped.

According to the student, Cuba, which has been affected by a 60-year old economic and financial embargo by the U.S government is going through tremendous hardship at the moment.

She said that some students have to get up as early as 6.00 a.m. to get a shower because the water only comes twice a day and in some schools electricity is taken at a certain time in the day.