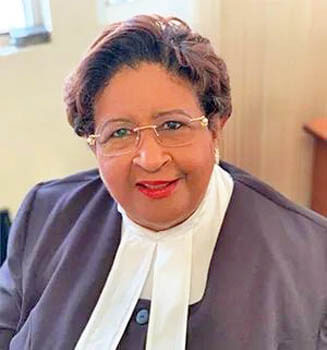 Tributes have begun to flow from members of the local legal profession on the passing last night of Celia Clyne-Edwards, the sole female Queen’s Counsel on the island who died at age 65.

The President of the Grenada Bar Association (GBA), Derick Sylvester told THE NEW TODAY that the legal body has already sent a formal condolence message to the family and all the members of the legal fraternity on her passing.

Sylvester described the late female QC, who was experiencing severe ill health in the past two weeks as “a legal icon” who will be missed by members of the profession.

“She was a professional, she was excellent at what she did – she was like a mother to all of us. She has guided and moulded many attorneys in this profession, hence the reason for the outpouring of love and support to all the children,” he said.

“I extend my own deepest condolences to them (the family members) and be rest assured that they have our fullest support,” he added.

According to the GBA President, he best remembers the late Celia Clyne-Edwards for three seminal cases that all ended up before the Law Lord at the Privy Council in England including one involving an engineering company against the State in the 1990’s.

This involves Dipcon Engineering in which the female attorney was able to secure a judgement against the Keith Mitchell-led government for over EC$19 million dollars for breach of contract.

When Prime Minister Mitchell came to power after the June 1995 election, he ended the road construction contract that Dipcon signed with the previous Congress government of late Prime Minister Sir Nicholas Brathwaite in favour of the Kuwaiti-owned company, CCC.

Sylvester referred to Clyne-Edwards, a former island scholar as “a stalwart in the legal profession” and one who would be “surely missed” by all members of the profession.

He said: “When you hear the name Celia Edwards, QC, you know it is someone who will be coming to court well prepared, articulate and respectful to other counsels. She was the cutting edge in this legal profession. In other words, persons should try to emulate her (and) I will call on the younger attorneys in the profession to take a page from her book and try to live the life that she has lived”.

“She respected every counsel even when she is on the other side and she has a matter against you. At the end of the matter there was absolutely no animosity. She’s a lady among ladies and a woman among women”.

The GBA President disclosed that he would give a more elaborate and detailed tribute to the late Celia Clyne-Edwards during a special sitting of the court in her honour to be held before her funeral service and burial.

Former Prime Minister Tillman Thomas, an attorney-at-law by profession, also issued a brief statement on the passing of the celebrated female QC.

Thomas said: “Sincere condolences to the children and extended family of Celia. Her passing is not only a loss to the family but a loss to the legal profession and the wider community. Her contribution to the legal profession was outstanding. Let us thank God for her and the wonderful moments we shared with her. May her soul rest in eternal peace.”