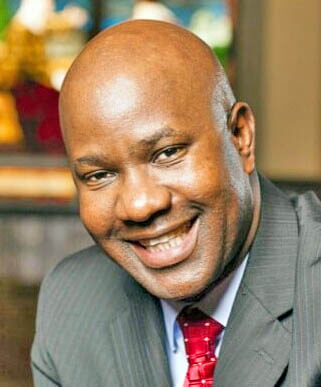 A senior Grenadian pastor in the United States has cited both Prime Minister Dr. Keith Mitchell and former Education Minister, Anthony Boatswain for blaming each other over the failure of the New National Party (NNP) government to implement an Ipad computer programme in the nation’s schools as part of a promise made to win the 2013 general election.

In an exclusive interview with THE NEW TODAY, Rev. Terrence Griffith who is affiliated with a major black church in Pennsylvania, said he was at the centre of the Ipad proposal which had the blessings of Prime Minister Mitchell as a major plank of his party’s crusade in its 15-0 defeat of Congress.

Rev. Griffith said that nine years later he has not even received an explanation from the Mitchell-led administration at the Botanical Gardens for its failure to implement the programme in the nation’s schools.

He spoke of appearing on some of the political campaign platforms of the NNP for the election to promote the Ipad initiative that would have benefitted all the nation’s school children.

“I was at the centre of it. I was the one who through a grouping in the Pennsylvania area had brought it to the then (NNP) in opposition – they were not the ruling party at the time,” he said.

Dr. Mitchell’s NNP had been soundly beaten 11- 4 in the 2008 general election by the National Democratic Congress (NDC) then headed by attorney-at-law Tillman Thomas.

According to Pastor Griffith, the current Grenadian leader used to visit Pennsylvania very regularly when in opposition and the pastor played a major part in putting him in contact with a number of influential persons in the area.

He said that one of the richest blacks in the state, who was a medical doctor, was very impressed with the NNP leader “and gave him a sizable (financial) contribution for his party.”

“Keith didn’t ask for the money but (the businessman) said I need to help you out,” said Griffith who indicated that the American entrepreneur felt that PM Mitchell was very intelligent.

“We spoke to some other folks and they were interested in putting Ipads in every single classroom (and) so that was part of the campaign.

I actually came down and campaigned with them (NNP) because we had the assurance that Ipads would be placed in every single classroom beginning with secondary schools and then filter through the elementary schools”.

Rev. Griffith noted that nine years later the Ipad programme which was sold to the electorate in the 2013 campaign, has never materialised under Mitchell’s NNP regime.

He said: “It’s not for lack of trying. I came down with somebody from the company. I came down subsequently, I met with the Prime Minister, and talked to Anthony Boatswain who was the Minister of Education.

In my opinion it is a promise that they failed to deliver on and the question is why? I came away with the impression that – you know it wasn’t direct but I think it was very subtle that something (financially) has to come out of that. There was no offer made – we made no offer in terms of giving anybody any money – nobody was going to benefit from it (financially) as it was for school children,” he said

“One is left to wonder whether or not the fact that nobody was offered anything… that it died not a natural death- it was killed, dead by homicide. That’s what I think happened,” he quipped.

Rev Griffith went on to say: “The question I ask often – why campaign, why make a promise and not deliver for no logical reason at all?”

According to Rev. Griffith, he saw a red flag when Minister Boatswain indicated that the government would have to bid out the Ipad initiative.

“I said (to him) – how are you going to bid out something that somebody proposed? That was my question to him. It’s a proposal from our company now you want to bid it out. The question is – did he really bid it out? I asked him (Boatswain straight up – what (are) you trying to say to me?”

Rev. Griffith also told THE NEW TODAY about a visit he paid to the Prime Minister at Mt Royal where the Ipad project was discussed between the two of them in the presence of his wife.

He said: “I showed up on him unexpectedly. I went to Mt Royal to have a conversation with the Prime Minister – he was actually sick at the time, I think he was down with a bug. My wife and I drove up there. On my way there I got to the gate and I actually called Anthony Boatswain and I asked him, listen man, what’s going on man, give me a straight up answer, what is preventing this Ipad stuff?

This is what he (Boatswain) said to me – the Prime Minister is holding it up and my wife heard it because I had him on speaker. That was his direct statement. So I said to him that I am going to ask him (PM Mitchell) because I’m at Mt. Royal now, I am going up to see him and he got very quiet when I said that.

So I went to Mt Royal, the Prime Minister came out – it wasn’t a long meeting because he had the bug. When I told him, listen, what’s going on? This is what he (PM Mitchell) said to me – the Minister of Education is holding it up. This is exactly what I said to him (Dr. Mitchell): If I was the Prime Minister I would have fired him (Boatswain) because no minister would hold up my programme and that was the last conversation we ever had.

I think I know the Prime Minister well – if it was a project that he really wanted he would have fired Boatswain or put it this way Boatswain would have done it because nothing happens without the concurrence of a Prime Minister.

So if they didn’t want to deal with the people proposing the project (then) find somebody else because that’s a campaign promise you made. If you believe that education is the key to the future of Grenada and the young people are the future of this country then this is where you invest.”

Rev. Griffith was in Grenada this week offering six scholarships on behalf of the National Baptist Convention in the United States to students attending the T.A Marryshow Community College (TAMCC).