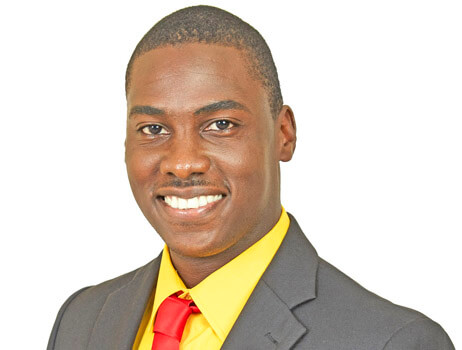 NDC MP in waiting for Carriacou and Petite Martinique, Tevin Andrews - speaks out against discrediting remarks leveled at the NDC candidates

The National Democratic Congress (NDC) candidate for Carriacou and Petite Martinique, Tevin Andrews, wants Grenadian leaders to quit being hypocritical when it comes to capabilities of young people who offer themselves up for leadership roles in the country.

Andrews, who was a Guest on the weekly NDC Heartbeat programme on Sunday, used the opportunity to speak out against the humiliating comments being leveled at the slate of NDC candidates, by members of the incumbent Keith Mitchell-led New National Party (NNP) on the political platform in his campaign leading up to next Thursday’s highly anticipated election poll.

The Congress candidate is very optimistic that he will unseat attorney-at-law Kindra Maturine-Stewart in the battle for control of the constituency of Carriacou and Petite Martinique.

Prime Minister Mitchell has publicly lambasted the NDC team of candidates, labeling them as “inexperienced and inadequate for these challenging times,” citing the ongoing pandemic and war in Ukraine, as major issues that can be best handled by the ruling party, which has gained sufficient experience under his leadership over the years.

Andrews has hit back at the manner in which those within the ruling party have been trying to belittle young people in the run up to the election.

So, on one (1) hand you are saying you are important we love you, we want you to get involved, and on the other hand when a group of young people stand up and say yes we want to get involved, you fighting them down, and coming up with all sorts of manner of things discouraging them from moving on,” he added.

According to Andrews, the NDC has “a dynamic team (that) is not just 15 men and women, but thousands of people…”

His colleague candidate, 24-year old Kerryne James, a former opposition senator, and youth activist also took issue with the attack on the credibility of the NDC team during the party’s youth rally, which was held Sunday at the Cuthbert Peters Park in the constituency of St. John.

James is hoping to unseat the veteran, Alvin Dabreo, to become the youngest politician to be elected as a Member of Parliament on the island.

“The time has come for a new generation of leadership to emerge to awaken the consciousness of our people, and to plan for our future today”, James told the rally, adding that “when we call out the (national) issues and take action, we are ridiculed by our so-called leaders – they try to discredit us because of our age.

They say that we are too young and inexperienced. Their lack of interest in our (youth) development is clearly showing. They don’t expect the youth to lead because that was not their plan. Well, I have news for them, the youth are the agents of change, and we have a loud voice.

Now is the time for us to stand up for ourselves and our future. Grenada’s youth are intelligent, vibrant, creative and full of talent. So, when young leaders of the NDC stand here, we stand with conviction and confidence.

Being young does not mean that I am unable to handle the responsibility of being a parliamentary representative. My years of education, activism, community service, and interaction with my fellow citizens have prepared me for this role.

My age is not a hindrance, it is my greatest strength and asset. Youth involvement in politics is crucial as we take up the mantles of responsibilities, and lead Grenada ourselves. I am not a political infant and our team is more than prepared to reform Grenada.

When we look around us, we don’t see an evolving and thriving society with sustainable development, or policies and legislations in place to protect the interest of the people, and secure our future. What we see is a prolonged, and deliberate set of actions to control, and manipulate our people.

We cannot fool ourselves to think that everything is okay,” James said, noting that “Grenadians are suffering and are being taught (by the ruling regime) to accept it.”

The 44-year old NDC Party Leader, Dickon Mitchell, stated that “65% of the population of Grenada is 35 years, and younger” and gave assurance that the “NDC will ensure that the young people of Grenada are reflected in every nook and cranny of government, and leadership, political, economic, business, artistic, commercial (and) legal activity.

And, therefore we must pave the way for them to do better, that we must serve, and move out of the way, and encourage them to do better (because) it is the only way that nation can prosper.”

Former school principal, Jonathan La Crette, the young NDC candidate, who is hoping to unseat Prime Minister Mitchell in the St. George North-West constituency, which has been an NNP stronghold since 1984 also addressed the issue of youth empowerment.

He said: “Young people, what the National Democratic Congress is bringing to you in this season of politics is an aspiration to motivate (and) inspire you…for you to desire, and want more – an aspiration for you to value your youthfulness, innovation, creativity, worth, so that you understand that you are not just worth a vote but your contribution to nation building and empowerment is worthwhile and that you must be applauded for your contribution.’’

The 75-year old longstanding Grenadian leader who has been campaigning on the theme, ‘one for the road’, has received strong support from a young female politician from the conservative Jamaica Labour Party (JLP), 33-year old Rhoda Moy-Crawford, the MP for Manchester Central who appeared at the NNP’s rallies on the weekend.

She labelled the aging Prime Minister Mitchell as the “Six-star general while delivering the feature address at the NNP youth rally last week Friday, at the Plains Playing field in St. Patrick, and described him as “the most, experienced, honest, trusted, respected, diligent, and loved political leader in Grenada at this time.”

MP Crawford, who became the youngest member of the Jamaican Parliament in 2020, following the landslide victory of the JLP in the general elections there, also helped to push the NNP’s agenda that the NDC team is an inexperienced alternative.

“You cannot afford to trade safe hands for uncertain hands,” the Jamaican MP warned as she endorsed the NNP’s position that “the 15 candidates of the NNP have all been tested (and) tried by the challenges of Grenada, and they have been proven as the right team to lead Grenada’s recovery after the deadly pandemic of modern times.

Grenada, this is the party, and that is the leader that gives young people hope, and a future, do not be fooled and believe the lies of the other ones,” said the Jamaican MP, who wanted to see a third consecutive clean sweep victory at the poll for PM Mitchell and his NNP next week Thursday.