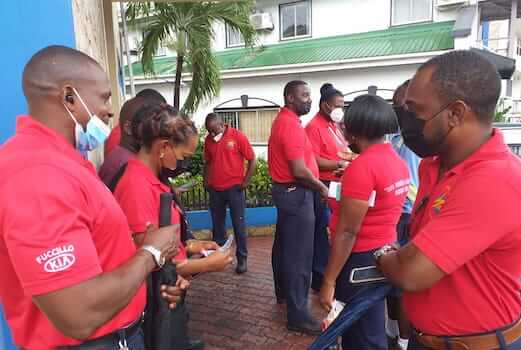 With Christmas 11 days away and the St George main port at its most busy for the year, the Technical & Allied Workers Union (TAWU) has threatened to bring things to a halt over a dispute with the Grenada Ports Authority (GPA) on several grievances affecting workers.

As TAWU was meeting with the disgruntled workers, over 50 persons were seen outside the main gate of GPA on Monday waiting to get onto the compound to clear the traditional Christmas barrels with foodstuff sent to them from overseas by relatives and friends, especially the United States.

President-General of the Technical & Allied Workers Union (TAWU), Andre Lewis told THE NEW TODAY that the Port Authority needs to address a number of “important urgent matters” in order to avoid a full blown strike and was given until the end of business day Tuesday to bring an end to the manner in which it has been handling these issues.

He mentioned in particular an outstanding issue involving senior employee, Denis Greo, as well as retroactive pay increases due to workers, outstanding bonus payment from 2020 and the current status of bonus for 2021, and the long overdue job evaluation that should have been done.

Lewis, the labour representative in the Grenada Senate, lashed out at the approach of the Port Authority to go behind the back of the union, Shop Steward and workers and to engage a third party to try and resolve certain workplace issues.

On Monday, TAWU and the workers assembled in front of GPA on the Carenage to plot the next move in the dispute with GPA.

After the meeting, Sen. Lewis disclosed that the workers will continue to wear red on the job and warned that the industrial action will be escalated if no action is taken by management within the timeframe given to them.

He specifically said that a vexing issue is the manner in which the Port Authority wants to settle a number of matters with workers by going to them directly and overlooking the union and engaging third parties to resolve them with the workers.

“…We need to signal to them that that needs to stop,” he said.

According to Sen. Lewis the Ministry of Labour made a recommendation to GPA in favour of the union and the workers which were accepted on one of the outstanding issues but the authority is dragging its feet on implementation.

“The Port Authority officially accepted the recommendations in writing by the Labour Commissioner but somehow along the line they seem to have changed their mind so this matter has been outstanding for a while so we need to resolve this matter now,” he said.

The TAWU boss disclosed that it is more than a year now since GPA has failed to get back to TAWU and the workers concerning the remainder of the bonus to be paid to employees along with bonus payment for 2021.

GPA employee Giselle Charles described the action taken Monday as “a show of solidarity” with the staff for matters that are still outstanding with the Port Authority.

There has been no official response from GPA, which is a state-owned entity, on the claims being made by TAWU.