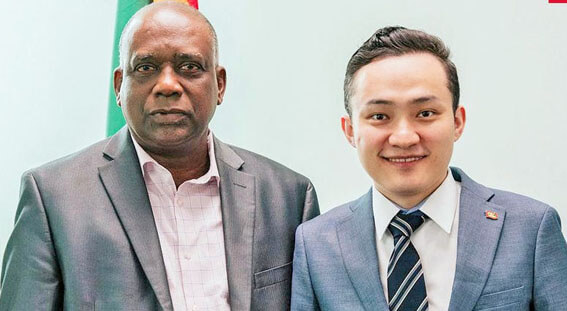 Minister of Foreign Affairs, Oliver Joseph pictured on the (left) along with Justin Sun (right)

Social media platforms have been abuzz following international reports last week Friday that Sun, 31, who is a leading figure in the crypto and blockchain sphere, and the Founder of TRON, one of the world’s largest, and most popular blockchain platforms, has been nominated as Grenada’s “permanent ambassador to the World Trade Organisation.”

This post was once held by the Trinidad-based Dr. Patrick Antoine, a former close associate of Mitchell’s NNP.

According to international reports, Sun will be authorised to represent the Government of Grenada at WTO meetings, once his nomination is accepted by the WTO, but it would not be a paid assignment.

Questions have since surfaced about whether the government received money from Sun in exchange for landing the diplomatic post.

Speculation is rife that the Chinese-born young entrepreneur intends to use his diplomatic status to push blockchain technology and cryptocurrency in the Caribbean.

Bloomberg News quoted him as saying in a report last week Friday that “our crypto industry has got into the stage, we really need sovereign states and regulators and international organisations to recognise the potential and the benefits of the blockchain technology”.

He went on to say: “That’s why I think I will focus lots of my energy, to try and push blockchain technology and cryptocurrency — the importance of all of this in developing countries and developed states as well. I will also try to promote new technology development in Grenada.”

New York-based, Gerry Hopkin, a former Aide to ex-Prime Minister Tillman Thomas is among persons in the Diaspora, who commented on Sun’s appointment in a Facebook post a few days ago, expressing the hope that “appropriate steps would be taken to ensure that the entire nation benefits from this move.”

Hopkin also expressed concern over the “possible positive and negative impacts that adopting such a move may have on the long-term needs and well-being of the residents of a developing small state.”

“One thing we can be immediately certain of: somebody got paid. The incumbent administration’s campaign finance accounts may benefit from this, while the Grenadian people are being left in the dark as to the exact amount paid for this ambassadorial assignment,” he said.

“Without transparency and accountability, mismanagement of national assets will remain a recurring problem in countries like Grenada. QUERY: Can someone tell me how much money was paid to Grenada on and/or off the table, by Sun for this ambassadorial position at the WTO?” Hopkins wrote on his Facebook page.

Political Activist Kem Jones has added his voice to the debate, and condemned the move by the Mitchell regime, whom he said has a history of choosing “foreigners over nationals for key positions to market, and advance Grenada.”

Jones, who expressed this view during his radio programme, The Eagle’s Eye Talkshow on Monday, contended that there are “Grenadians in the Diaspora who are equally qualified or even more qualified,” and called on the Mitchell regime to “give our people the opportunity to market and represent our country.”

“Too many times we have foreigners at the forefront… I am yet to find one (1) island within our region where they have foreign nationals at the WTO representing their country…you will realise that Keith Mitchell is all about the Chinese (and) the foreigners…,” Jones told the listeners of the morning radio programme.

News of Sun’s nomination as Grenada’s ambassador to the WTO came days after the Mitchell-led regime in the Botanical Gardens found millions of dollars to make one-off Christmas bonus payments to selected categories of public servants in the fight against the deadly coronavirus pandemic.