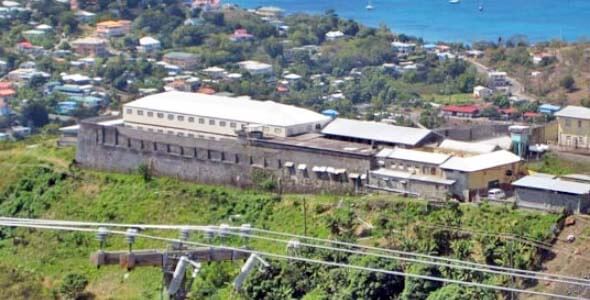 Acting Commissioner of Prisons, Superintendent of Police, Damion Lee has confirmed that there is a suspected case of Covid-19 at the Richmond Hill prison.

THE NEW TODAY understands that officers attached to South St. George police station have taken the prisoner to the government-controlled quarantine facility owned by St. George’s University (SGU) on the Grand Anse beach.

Supt Lee said that one prisoner exhibited signs of Covid-19 on Sunday and it showed up positive when he was rapid tested and that the authorities are awaiting the results of the more reliable PCR test done on him for the virus.

According to the senior police officer, it is not the first time that an inmate at Her Majesty’s prison has Rapid tested positive for Covid and then declared to be negative when the PCR test results came in from the Ministry of Health.

He said that the other prisoners who might have come in contact with the suspected case will also be tested for the virus.

Supt Lee admitted that there was a protocol in place to deal with Covid-19 cases at the prison but said that he could not reveal it due to security concerns.

However, THE NEW TODAY was able to get a glimpse into the thinking of officials at the prison to handle Covid-19 cases based on the May 6, 2021 Minutes in our possession of the Prison Visiting Committee (PVC) headed by Pastor Christopher Williams.

Following are extracts from the minutes in which PVC member Lydon Richardson addressed the issue.

“Mr. Lydon Richardson questioned the possibility of Covid positive persons being sentenced to the prison.

“The Superintendent said that usually, positive tested persons would not be sent to the Prison. Instead, they would be sent to quarantine outside of the Prison under Supervision.

“Mr. (Rupert) Neckles (Superintendent of Prisons) went on further to say that he had asked a doctor of the correct protocol to follow if a person that was sentenced to the Prison tested negative but after or during their quarantine period, developed symptoms of Covid-19 tested positive.

“He said that such a case should be reported immediately to the Ministry of Health and they would get said person out of the Prison. All the other persons who were in proximity to the positive tested person would have to be quarantined and tested.”

This development concerning the Prison and a suspected case of Covid-19 comes as Grenada has been plunged into a Covid-19 crisis with cases soaring to alarming proportions in recent days in virtually all parishes on the island with the exception of the two sister isles of Carriacou & Petite Martinique.

A police insider told THE NEW TODAY that several officers at Central Police Station on the Carenage are showing symptoms of having the virus.

Police have since confirmed that 8 out of the 18 confirmed positive cases of Covid-19 within RGPF are located at that particular station.

One police officer who is attached to the Supreme Court Registry of the High Court also tested positive for the virus prompting an employee there to make the following comment, “It’s getting hot in here as well”.

Grenada has officially recorded 357 positive cases of the virus since Covid-19 was first detected on the island in March 2020.

Speculation is rife that several citizens especially on the Western side of the island have been showing signs of having Covid-19 but are reluctant to report for testing at health centres on the grounds that they cannot pay $410.00 for a PCR test for the virus.

However, acting Chief Medical Officer (CMO), Dr. Shawn Charles has often stated that persons who believe that they were exposed to a Covid-19 positive individual can come in for a free test for the virus.