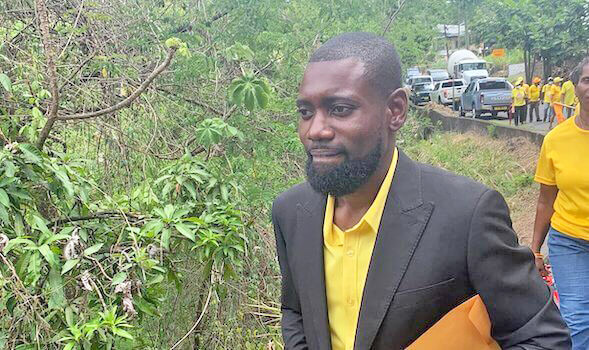 Even the dead names have not been removed from the Voter’s list.

This was the charge made to THE NEW TODAY over the weekend by the candidate for the main opposition National Democratic Congress (NDC) for the St. George North-East constituency for the June 23rd general election. Ron Redhead who expressed concern that some of the names of the recent dead and others known to have passed to the Great Beyond a long time ago are still on the list.

Redhead said that he had raised objections with the Registration Officer for the Constituency but is facing an uphill battle to get the names removed.

“We are kind of questioning the slowness in terms of how long they are taking to remove the names of the dead from the list,” he added.

The constituency has often been a bone of contention over the years with allegations from Congress that the ruling New National Party (NNP) has been engaged in voter padding by sending over surplus voters from the neighbouring St. George North-West of Prime Minister Dr. Keith Mitchell.

Redhead said that the Parliamentary Electoral Office (PEO) has already printed the “Consolidated List” of voters that should be eligible to cast ballots in the June 23rd elections and that today (Tuesday) is the final day for persons to object to names on the list.

“There is no guarantee that even if we submit new names that they will remove it before the General Election,” he added.

According to Redhead, NDC had filed 98 objections with regards to names that should be removed since March 8 from the constituency but most of them are still on the List.

“We were told after meeting with them on Friday at least five names were removed from that 98 and that’s not really enough…,” he said.

The NDC candidate recalled that in the previous election of 2018, there was a figure of 200 names that had to be removed from the Voter’s List based on objections made by his predecessor, former finance Minister Nazim Burke who lost the seat to the then NNP Candidate, Tobias Clement, who resigned from the ruling party in 2019 to become Leader of the Opposition.

Redhead said that about 50 names were removed by the PEO from the list especially from the New Hampshire area.

When asked the reason given by the PEO for keeping 93 of the 98 objected persons still on the list for the 2022 general election, the first-timer in electoral politics said: “What they said is that one person that has to be doing the investigation and it takes some time and so on but from March 8 to now that was enough time to at least find more than that and get them removed … so that again was another suspicion.”

Redhead did not rule out legal action on the part of Congress in the situation given the fact that its Political Leader, Dickon Mitchell has assembled a team of lawyers including some from within the region to look after the party’s interest in the upcoming general election.

“We will have to reach the point where we have to file an injunction. I can’t give you a specific response because the party of course is the one to give the official response. I can only speak on my end from the Constituency of St. George North-East.

We have done all that we are needed to do in terms of filing the objections and as much as possible identifying who these people are and trying to get to the fact that they are not living in the constituency and should not be registered there to vote.”

Phillip, a former member of the Congress party in the St. George North-West branch had a public spat with Congress and is now supporting the candidacy of his brother, Nimrod Ollivierre who is running against Redhead in St. George North-East.

The NDC candidate said: “He (Phillip) lives in Grand Mal and has lived in Grand Mal for years now by all indications and is registered to vote in Beaulieu (St. George North-East). The question is – what gave him the authority to vote in Beaulieu other than wanting to just give his brother a boost because he normally voted in Grand Mal. There is nothing saying that he lives in Beaulieu presently. So that is the situation there.”
Redhead charged that Phillip is known to be staying in Grand Mal in the downstairs of his mother’s house and “has lived there all his years.”

According to the NDC candidate, the information gathered seems to suggest that Phillip changed his place of voting from North-West to North-East sometime in late 2019 to early 2020.

Redhead made mention of an internal party investigation into the conduct of Phillip and the then NDC candidate for the 2018 general election, Allie Dowden, who has also defected to the NNP.

He said the investigation centered on the role of these two Congress members trying to block NDC from holding its Convention last October, when they openly voiced support for former finance Minister, Nazim Burke, to return as Political Leader and not the current holder of the post, attorney-at-law Dickon Mitchell.

“Much people don’t know that, but I personally led the investigation as Assistant General Secretary for the Southern Zone because I had to ascertain what was the situation regarding St. George North-West at the time which was under the auspices of Allie Dowden and Wade (Phillip).

Both were members of St. George North-West NDC Branch and they led an attempt to try to prevent the Convention from happening – they were encouraging various constituencies to boycott the Convention and they tried to promote the idea that Naz should be the leader when Dickon was announced as a person of interest and shortly after a contender.

That investigation was completed by myself – I am aware of it and I am aware of the attempt being made to try to destabilise the Convention in terms of constituencies attending and so forth.”

Dowden was reportedly a member of the Grenada United Labour Party (GULP) before he accepted membership in Congress.

Redhead was optimistic that the canvassing of the Voter’s list by NDC is going alright in St. George North-West except the fact that they cannot identify a number of persons.

New Hampshire is the same thing. La Mode is another area. I got a Canvass from Boca, Sanko – we have a number of people that we can’t identify. So we are doing that and trying to identify who these people are and take it from there. That is the kind of work we are doing right now.

We have to confirm who these people (are) and take action from there. As long as we can’t identify, we have to raise red flags.”