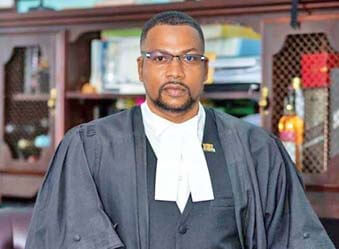 The Public Service Commission (PSC) has taken to court one of its former heads, Attorney-at-law Derick Sylvester and won a case against him in front of female high court judge, Justice Agnes Actie.

Female lawyer Karen Samuel moved against Sylvester who was representing an individual who had brought a case against the PSC.

Samuel had asked the former commission head to remove himself from the case on the grounds of conflict of interest.

Justice Actie in handing down her ruling issued the following orders against Sylvester who was represented in the matter by Queen’s Counsel, Dr. Francis Alexis.

It is hereby Ordered and Directed as follows:

(1) The application for the Law Firm, Derick F. Sylvester and Associates, be recused as legal practitioners for the claimant is granted.

(2) The Law Firm, Derick F. Sylvester & Associates, is hereby restrained from further acting and is hereby removed from the record as the Legal Practitioners for the claimant, Augustine Pascall, in these proceedings.

(3) The Law Firm, Derick F. Sylvester & Associates, shall pay costs to the Applicant, Public Service Commission, in the sum of $750.00 within twenty-one (21) days of today’s date.

(4) The matter shall be listed for further hearing and to enable the claimant to retain new counsel on a date to be arranged and notified by the court office.

As a public service, THE NEW TODAY reproduces the court ruling by Justice Actie against attorney Sylvester: 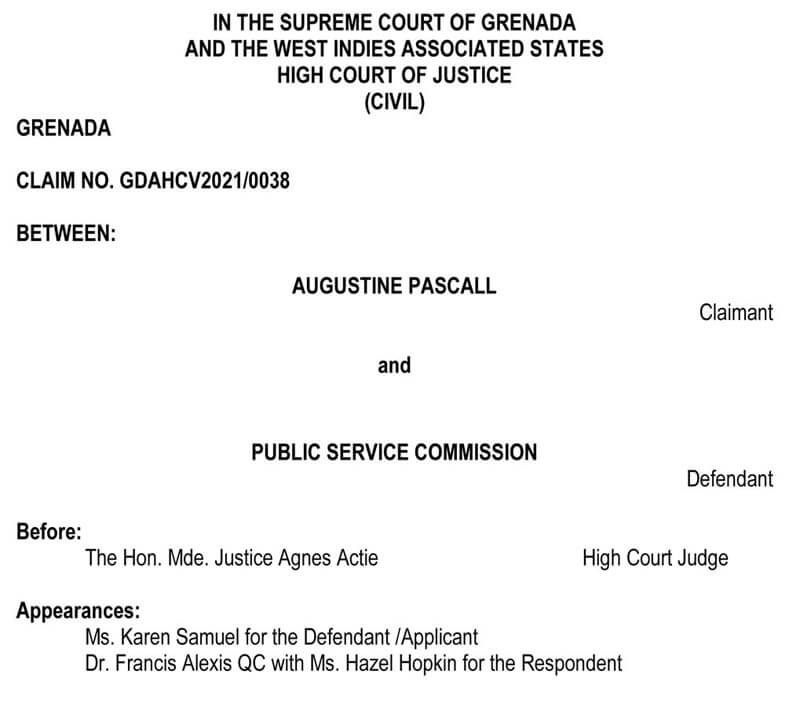 JUDGMENT
[1] ACTIE, J.: The issue arising in this application is whether the legal practitioner for the claimant should be prevented from further acting and representing the claimant in these proceedings.

Background
[2] The claimant, Augustine Pascall, filed a fixed date claim for judicial review against the Public Service Commission (“PSC”) seeking an order of certiorari to quash the decision made on 28th September 2020 terminating his acting appointment as Technical Officer in the Ministry of Tourism and Civil Aviation, a position he acted in for over nine (9 ) years. Mr. Pascall also seeks an order of mandamus directing the PSC to confirm his appointment as Technical Officer. The PSC in response contends that the substantive post of Technical Officer held by Mr. Francis Robertson was not vacant to enable Mr. Pascal to be confirmed in that post.

The Application
[3] By notice of application filed on 18th June 2021, the PSC applied for an order that the Law Firm of Derick F. Sylvester & Associates be recused as legal practitioners for the claimant, Augustine Pascall. The application is premised on the ground that Mr. Derick F. Sylvester, Attorney-at-Law and Principal of the Law Office of Derick Sylvester & Associates, on record for the claimant, held the position of Chairman of the Public Service Commission during the years 2013 to 2018.

[4] The application is supported by the affidavit of Naomi Jeremiah, Chief Personnel Officer. The salient grounds of the application are as follows:

i (i) Pursuant to the Legal Profession Act 2011, an Attorney- at- Law is obligated to:

ii (a) act in a manner to promote public confidence in the integrity of the legal system and legal profession;

iii (b) avoid situations of potential and or actual conflict including between his professional and personal interest; and

iv (c) abstain from acting in a manner in which he had previously had responsibility while in public employment.

v (ii) Mr. Derick F. Sylvester was the Chairman of the Public Service Commission from 2013 to 2018 and during those years had unrestricted access to the Commission’s files and participated in decisions affecting the matter in dispute to wit: the firm has filed a request for information concerning the decision-making on Mr. Francis Robertson whose status affected the decision making in relation to Mr. Augustine Pascall, the claimant in this matter.

i (iii) Further to the filing of the said request for information, the Public Service Commission through counsel made overtures to Mr. Sylvester’s chambers to consider their acting in this matter. While awaiting correspondence in response, the chambers of Derick Sylvester proceeded to file a witness statement by Mr. Francis Robertson in anticipation of the trial.

ii (iv) By law the proceedings of the Public Service Commission are confidential.

iii (v) The Commission fears that the first-hand knowledge obtained by Mr Derick Sylvester in his position as Chairman of the PSC on matters arising in and or relating to the present claim have or will have an impact on the manner in which the claim is prosecuted on behalf of Mr Pascall, giving him an unfair advantage.

iv (vi) The Commission believes that Mr. Derick Sylvester has breached the ethics mandated under the Legal Profession Act directed to the preservation of the integrity of the legal system and the profession.

v (vii) There is a risk that the legal system will fall into ill repute and the administration of justice will be adversely affected or in the circumstances justice might not appear to be done should Mr. Derick Sylvester and his law firm be allowed to continue to act as legal practitioners for the claimant in these proceedings.

vi (viii) It is unfair, unethical and in clear conflict of interest that an Attorney- at- law as former chairman of the Commission and by extension, the firm of which Mr. Derick Sylvester is Principal, who had first-hand information obtained when he held the most responsible position of the Commission, about the main issues in the claim, be allowed to continue to act against the Commission in that claim.

Response to the application
[5] Derick F Sylvester, in affidavit in opposition to the application, categorically denies that he is estopped from acting in the claim whether by operation of law, ethics, conduct or otherwise. He contends that his position as chairman of PSC when making decisions affecting or regarding public officers without more, cannot justify his restraint from involvement in the extant claim.

[6] Mr. Sylvester contends that he had no direct contact with the claimant or his file as a public officer while he served as chairman. He states that he has no recollection of his involvement in the making of any decision, substantial or otherwise in relation to Mr. Francis Robertson. It is for that reason that he sought further information as to his interactions with the file as had been alleged by the applicant.

Applicant’s submissions
[8] Ms. Karen Samuel, counsel for the PSC, in her filed submissions states that the Public Service Commission is a body corporate appointed by the Constitution to deal with appointments and related matters of public servants. Ms. Samuel contends that Mr. Derick Sylvester’s tenure as chairman gave him unrestricted access to the PSC’s files and as chairman made decisions affecting the crux of the defence in the substantive claim. Ms. Samuel submits that Mr. Sylvester is acting in breach of the subscribed oaths of allegiance as Chairman pursuant to Section 83(1) of the Constitution.

[9] Ms. Samuel further contends that Mr. Sylvester is also acting in breach of the mandatory Rule 1(3) of the code of ethics under the Legal Profession Act1.and refers specially to Rules 71 and 72 which provide as follows:

‘71. An attorney-at-law who holds a public office, shall not use his public position to influence or attempt to influence a tribunal, to act in favour of himself or of his client.

[10] Ms. Samuel submits that although the mandatory provisions of Rules 71 & 72 speak in terms of employment and holding a public office, however, by analogy the principles underpinning those rules suggest that it would be contrary to the ethics of the profession to permit Mr. Sylvester who acted as chairman of a high constitutional body as the PSC to (i) use information while he held in that position to advance his client’s case (ii) Use the knowledge of the file of Francis Robertson to determine the manner in which he would conduct his client’s case to wit, the questions directed to the PSC in the request for information and be placed in a position to cross-examine an officer of the PSC at trial with the full knowledge and secrets of the decision making room which may not be possessed by the witnesses of the PSC as the minutes only produce decisions and not a transcript of the proceedings.

[11] Ms. Samuel further submits that Mr. Sylvester’s conduct is not such as promotes confidence in the integrity of the legal system. Counsel relies on the dictum Lord Millet in the House of Lords decision in Jefri Bolkiah v KPMG (a Firm)2 where he stated:

Extent of the solicitor’s duty
“Whether founded on contract or equity, the duty to preserve confidentiality is unqualified. It is a duty to keep the information confidential, not merely to take all reasonable steps to do so. Moreover, it is not merely a duty not to communicate the information to a third party. It is a duty not to misuse it, that is to say, without the consent of the former client to make any use of it or to cause any use to be made of it by others otherwise than for his benefit. The former client cannot be protected completely from accidental or inadvertent disclosure. But he is entitled to prevent his former solicitor from exposing him to any avoidable risk; and this includes the increased risk of the use of the information to his prejudice arising from the acceptance of instructions to act for another client with an adverse interest in a matter to which the information is or may be relevant.

…It is of overriding importance for the proper administration of justice that a client should be able to have complete confidence that what he tells his lawyer will remain secret. This is a matter of perception as well as substance. It is of the highest importance to the administration of justice that a solicitor or other person in possession of confidential and privileged information should not act in any way that might appear to put that information at risk of coming into the hands of someone with an adverse interest.

…I prefer simply to say that the court should intervene unless it is satisfied that there is no risk of disclosure. It goes without saying that the risk must be a real one, and not merely fanciful or theoretical. But it need not be substantial3.”

[12] Ms. Samuel concludes that the House of Lords in Jefri Bolkiah makes it clear that the duty described applies not only where the relationship of solicitor-client exists in the strict sense but where any person holds a position of confidence with another as was that of Mr. Sylvester as Chairman of the PSC.

Respondent’s Submissions
[13] Dr. Francis Alexis QC for the respondent states that the allegation of breach of confidence made by the PSC is untenable. Queen’s Counsel admits that as much as the Commission’s business may be confidential, the outcomes and deliberations are published in the relevant departments involving the affected public officer.

[15] Dr. Alexis QC contends that matters pertaining to Francis Robertson are wholly irrelevant, immaterial and extraneous to the main claim. Dr. Alexis QC is of the view that the firm of Derick F. Sylvester and Associates should not be refrained from acting and relies on the Court of Appeal decision in Honourable Guy Joseph v The Constituency Boundaries Commission Etal.