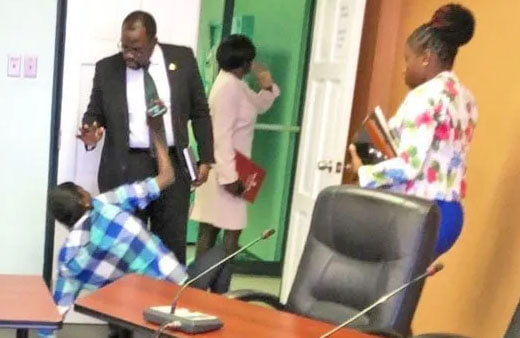 Flashback to file photo of female journalist Calistra Farrier on the floor at the Ministerial Complex with Sen. Winston Garraway pointing at her

Almost two years after denying the existence of video evidence of an alleged assault against a female journalist in Grenada by a government minister, the Grenada Broadcasting Network (GBN) obeyed a request from the Director of Public Prosecution to hand it over.

In September 2019 when Calistra Farrier accused Sen. Winston Garraway, then Minister of Information, of assault she told police investigators that the incident had been captured on video by a GBN reporter who was also attending a government press conference at the Ministerial Complex in the Botanical Gardens in Tanteen.

After initially admitting to the existence of the video, GBN management backtracked, claiming that no such video had been shot by their reporter, Gerard Joseph who was at the time an executive member of the Media Workers Association of Grenada (MWAG), who had also denied witnessing the incident.

But on Monday, Joseph appeared in Court for the first time, as a Prosecution witness and the existence of the video was confirmed to Chief Magistrate Teddy St Louis by the Police Prosecutor.

The Court was informed that new evidence was recently made available and is in the custody of Director of Public Prosecution, Christopher Nelson who was not in court at the time.

Nelson later confirmed that the video was recently surrendered to his office by GBN’s management.

It was not immediately clear why GBN decided to finally cooperate with the prosecution.

The matter was adjourned for a third time, this latest adjournment to facilitate disclosure of the new evidence to the defense.

The video is expected to offer crucial evidence about what happened between the government minister and the journalists after a post-Cabinet briefing at the Ministry of Works Conference room, Botanical Gardens.

The journalist had already provided the Prosecution with an audio recording of the minister allegedly using strong verbal language towards her after she fell to the floor.

Medical evidence of Harm was also submitted to Police investigators, however Garraway was only charged with simple assault.

The alleged assault arose after Garraway used his body to block the journalist from interviewing senior Cabinet minister and MP for St Mark, Dr. Clarice Modeste-Curwen who had agreed to speak with Farrier.

A photo showing the journalist on the floor and Sen. Garraway over her went viral and was the only evidence that was made public in the matter.

Soon after, Sen. Simon Stiell announced that he had conducted an investigation which cleared his colleague of any wrong-doing.

The incident was witnessed by several media workers as well as Press Secretary, Philomena Robertson.

Legal Affairs Minister Kindra Mathurine-Stewart was also in the room at the time of the incident.