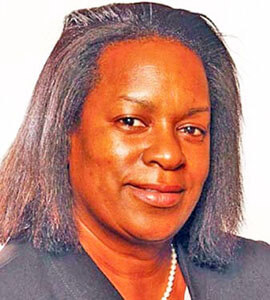 Female high court judge, Justice Agnes Actie has handed down a ruling in a case in which a woman who claimed to be the common law wife of deceased former broadcaster Fernando Johnson was trying to lay claim to his property including a house and five acres of land at Mardi Gras.

The woman was identified in the lawsuit as Joan Buckmire and she was challenged by Julie Ann Dowden, identified in court papers as one of the daughters of Fernando Johnson.

Buckmire alleged that she was looking after the deceased and before he died that they had entered into a personal relationship.

In addition, she said that Johnson had brought her into his small business and that she was entitled to some of the proceeds from the enterprise.

As a public service, THE NEW TODAY reproduces the Justice Actie judgement in which the two attorneys involved in the case were Deborah St Bernard and Benjamin Hood. 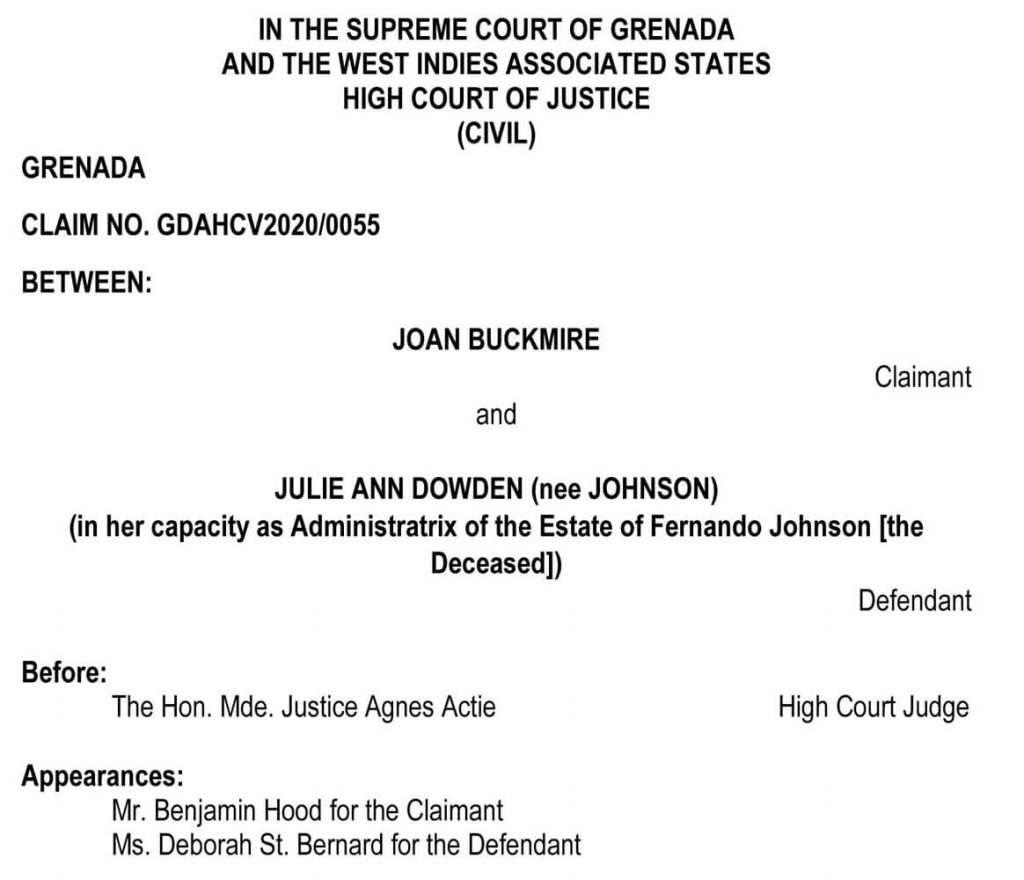 RULING
[1] ACTIE, J: The claimant claims that she was in an intimate relationship with Fernando Johnson (hereafter “the deceased”). The defendant is the daughter and the Administratrix of the estate of the deceased.

(1) A declaration that the defendant and/or agents of the defendant are estopped from restricting the claimant from the use and enjoyment of the dwelling house and adjoining property situate at Mardigras in the parish of Saint David in the State of Grenada.

(2) An injunction restraining the defendant, the defendant’s agents or successors in title from restricting, preventing or otherwise interfering with the claimant’s peaceful enjoyment of the dwelling house and property aforesaid.

(4) Damages for malicious and intentional trespass to the goods of the claimant located at the dwelling house.

(5) Damages for interference with the business of the claimant; Special damages in the amount of $30,711.17.

[6] The deceased took ill on 9th August 2019 and died on August 21st, 2019. The claimant continued to reside in the dwelling house after the death of the deceased.

[8] The claimant contends that the breaking into the dwelling house by the defendant, and the damaging and removal of items was conceived and executed with malicious intent, since the defendant knew or ought to have known that her actions would cause damage to the business and harm and embarrassment to the claimant. The claimant states that the business sustained damage over a period of approximately 3 weeks.

Defendant’s case
[10] The defendant in her filed defence avers that the deceased specifically denied being in an intimate relationship with the claimant when asked by his adult children.

[11] The defendant contends that the deceased indicated that he hired the claimant in a domestic capacity to assist with household chores when he was diagnosed with Alzheimer’s disease.

[13] Following the death of the deceased, a meeting was held at an Attorney’s office on 23rd August 2019 (hereafter “the said meeting”) wherein the claimant agreed to vacate the deceased’s residential property by 31st October 2019. The defendant avers that the claimant is now estopped from attempting to assert any beneficial interest or entitlement to any portion of the estate of the deceased.

[14] The defendant states that the continued occupation of the property by the claimant hinders or obstructs her duties as Administratrix.

[16] The defendant admits that she forcibly entered the dwelling house but maintains that at the time of her entry into same, the claimant had vacated the premises and was no longer occupying same.