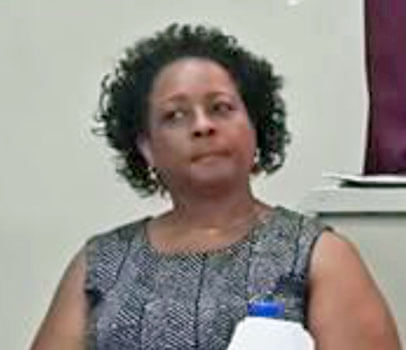 Attorney-at-law Deborah St Bernard was involved in the case

Female high court judge, Justice Agnes Actie has handed down a ruling in a case in which a woman who claimed to be the common law wife of deceased former broadcaster Fernando Johnson was trying to lay claim to his property including a house and five acres of land at Mardi Gras.

The woman was identified in the lawsuit as Joan Buckmire and she was challenged by Julie Ann Dowden, identified in court papers as one of the daughters of Fernando Johnson.

Buckmire alleged that she was looking after the deceased and before he died that they had entered into a personal relationship.

In addition, she said that Johnson had brought her into his small business and that she was entitled to some of the proceeds from the enterprise.

As a public service, THE NEW TODAY reproduces the Justice Actie judgement in which the two attorneys involved in the case were Deborah St Bernard and Benjamin Hood.

[17] The defendant counterclaims that the claimant, whether by herself or her servants and agents, wrongfully and unlawfully continues to occupy the dwelling house of the deceased without any legal authority, hampering and obstructing the defendant’s carrying out of her duties with respect to the estate, thereby causing the defendant to suffer loss, inconvenience and damages.

[18] The defendant counterclaims for, among other things:

(1) Possession of the residential property situate at Mardigras forming part of the Estate of the deceased and currently occupied by the claimant and/or her servants or agents.

(2) A declaration that neither the claimant nor her servants or agents are entitled to enter on or occupy the aforesaid residential property being the property of the deceased, or any part thereof.

(3) An order that the claimant deliver vacant possession of the dwelling house and other property and assets of the deceased to the Administratrix in her aforesaid capacity.

(4) A full accounting of the proceeds of the business, together with copies of all bank account(s) relating thereto from 9th August 2019 until the determination of this claim:

Procedural irregularities
[19] Ms. Deborah St. Bernard, counsel for the defendant, raised several procedural irregularities in relation to the claimant’s claim and breaches of the case management orders namely: (i) The claimant was given carriage of the case management order made on 28th January 2021 but filed the order some six (6) months later on the 25th June 2021; (ii) The claimant failed to comply with the direction for standard disclosure to be made by 30th April 2021; (iii) The claimant failed to comply with the order made at Pretrial Review on 11th November 2021 directing the parties to file skeleton arguments with authorities on or before the 1st March 2022, the claimant in breach filed on 17th March 2022 (16 days late) without making an application for an extension of time and giving reasons for the failure; (iv)The trial bundle was unpaginated in breach of CPR 39.1(4) (v) The claimant’s failure to file a defence to the defendant’s counterclaim.

[20] Firstly, the court will not rely or take into consideration the claimant’s late submissions filed in breach of the order without an application for an extension of time. Secondly, Rule 18.1 (1) (c) of the Civil Procedure Rules 2000 (“CPR”) defines a counterclaim as an ancillary claim. CPR 10.9 (2) provides that where a defence contains a counterclaim, then Part 18 applies. The defendant to a counterclaim/ancillary claim is required to file a defence within twenty-eight (28) days, failing which the ancillary defendant is deemed to have admitted the claim.

[21] Mr Benjamin Hood, counsel for the claimant, argues that CPR 18.9 provides that a defence may be filed. The court is of the view that even though CPR 18.9 is permissive and not mandatory, a counterclaim can stand on its own as a claim filed by the defendant. CPR 10.2 (4) provides where defendant fails to file a defence, judgment in default may be entered.

[22] The court is of the view that the claimant has failed to pursue her claim in keeping with the requirements of the CPR 2000. The failure to file a defence to the counterclaim suggests that the defendant’s claim is unchallenged by the claimant.

[23] Also, the failure to file standard disclosure is a breach of CPR 28.4 and accordingly the claimant is unable to rely on any documents not filed in accordance with the court’s order.

“where one person (A) has acted to his detriment on the faith of a belief which was known to and encouraged by another person that he is going to be given a right over B’s property, (B) cannot insist on his legal rights if to do so would be inconsistent with A’s belief.”

[25] Furthermore, Lord Carnwath in Mohammed v Gomez and others5 referred to paragraph 24 of the judgment of Lord Walker in Thorner v Major6 in relation to proprietary estoppel:

“… the doctrine is based on three main elements, although they express them in slightly different terms: a representation or assurance made to the claimant, reliance on it by the claimant; and detriment to the claimant in consequence of his (reasonable) reliance…”

“I would prefer to say… that to establish a proprietary estoppel the relevant assurance must be clear enough. What amounts to sufficient clarity… is hugely dependent on context.”

[29] In keeping with the above legal principle, the defendant has asserted9 that she has a greater right to the possession of the dwelling house than that of the claimant. Any interest in the property would devolve to the defendant as personal representative.

[30] Accordingly, the defendant is entitled to administer the estate of the deceased in accordance with the Intestate Estates Act10 and the Real Estate Devolution Act11, and thereafter, it is for the beneficiaries of the estate to determine how their interest in the property of the Estate is to be treated with.

Whether the claimant is entitled to damages for malice, trespass, and damage to property
[32] It is the evidence, and the court accepts that the claimant remained in possession of the said dwelling house after the death of the deceased. The court accepts the evidence that the defendant and her sister forcibly entered into the dwelling house and changed the locks. The actions of the defendant were done prior to her obtaining a Grant of Letters of Administration for the deceased’s estate. It is also the evidence that the defendant disconnected the electricity supply to the dwelling house. This court granted an injunction in these proceedings directing the reconnection of the electricity supply.

[33] The claimant in her statement of claim pleads and particularizes the items allegedly damaged or removed during the defendant’s and her agents’ illegal entry. It is trite that special damages must be pleaded, particularized and proved. The claimant produces no receipts or other documents which would assist in the substantiation of her claim. The court would usually award a nominal sum where the loss was ascertained in absence of evidence to substantiate the amount pleaded. The court is of the view that the parties should endeavour to reach an amicable settlement on the items claimed. Counsel, Ms. St Bernard, undertakes on behalf of her client to allow the claimant to remove her items and deal with the items particularized in the statement of claim.

[35] The court on equity principles takes into consideration that the claimant was in a common law relationship with the deceased and would therefore not make an award for the payment of rent for the period claimed by the defendant in the counterclaim, and accordingly no award is made for rent or damages as claimed in the counterclaim.

[36] Counsel for the parties agree that a period of ninety (90) days is reasonable for the full accounting and vacant possession of the dwelling home. The parties are further encouraged to have discussions and make reasonable arrangements for the business which is operated on the said premisses.

ORDER
[37] For the forgoing reasons, it is ordered and directed as follows:

(1) The claimant’s claim for absolute title to the dwelling house and 5 acres of adjoining property situate at Mardigras in the parish of Saint David is dismissed.

(2) The claimant’s claim for special damages is granted subject to the claimant proving the amount claimed, failing which the court will make a nominal award.

(3) The defendant’s counterclaim not contested by the claimant is granted in part.

(4) The claimant shall, within ninety (90) days from today’s date, provide a full accounting of the business “Adfer Fire Protection” together with copies of all bank account(s) relating thereto from the 9th August 2019 until judgment.

(5) The claimant shall deliver vacant possession of the dwelling house and other property and assets of the deceased to the defendant within ninety (90) days of today’s date.

(6) The parties each having some measure of success shall bear their own costs.

(7) The parties are further encouraged to have an amicable resolution of the issues pleaded as special damages.

(8) The matter is adjourned to 14th July 2021 for report with liberty to file a consent order if sooner settled on special damages.