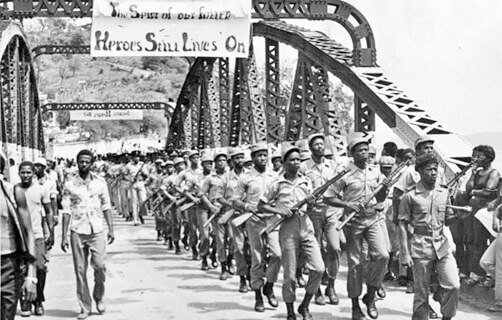 Mystery surrounds the whereabouts of thousands of dollars taken away from the monthly salaries of members of the disbanded People’s Revolutionary Army (PRA) after the demise of the 1979-83 Grenada Revolution that were sitting in an account in one of the local commercial banks.

THE NEW TODAY was contacted by a key member of the former army who said that no satisfactory explanation has been given to soldiers on what has become of the funds which were deducted from their salaries to become part of a credit union within the army.

The army man said that several soldiers have died over the years without being able to get anything from the fund for themselves and family members.

There are reports that EC$5 was taken out of the monthly salaries of soldiers to become part of the fund to help them in their later years in life.

A source familiar with the financial arrangement said that the salaries of EC$200.00 a month of those soldiers who were on assignment in Cuba were paid into the fund and they got nothing back on the demise of the revolution.

Soldiers who remained home during the four-and-a-half years of the revolutionary process would have lost $240.00 in the scheme.

According to the source, all the funds taken from the soldiers were legitimately placed into a local commercial bank and it was unfortunate that the monies were never returned to the soldiers.

He identified the signatories to the bank account as army strongman, General Hudson Austin, Lieutenant-Colonel Joseph Ewart “Headache” Layne, and Majors Einstein Louison who served as Chief of Staff of the army and Christopher Stroude.

When contacted, General Austin said he was not familiar with the PRA fund and had nothing to do with its operation.

Of the four top army officers, three of them – Austin, Layne and Stroude were taken into custody by U.S and Caribbean troops that stormed the island on October 26, 1983 – 6 days after Prime Minister Maurice Bishop and three Cabinet ministers were among persons executed on Fort George at the height of a leadership struggle for control of the revolutionary process led by the New Jewel Movement (NJM).

The source said that the arrangement made with the bank is that any two of the four signatories could have done financial transactions with the account that comprised mainly of salary deductions from soldiers.

He described the arrangement as more of a “Savings Credit Union” and not a regular Credit Union arrangement that was set-up within the PRA but the funds were lodged legally in one of the then existing local commercial banks for safe-keeping.

The source dropped hints that the account in the bank became dormant due to inactivity over the years and that all the monies belonging to the soldiers seemingly ended up with the Eastern Caribbean Central Bank (ECCB) in St. Kitts.

He pointed out that when Lieutenant-Colonel Layne who studied law in prison was released after serving his lengthy prison sentence, made all attempts to get as much information on the status of the funds which should have been in the bank.

He said that Layne gathered as much information that he could obtain including the listing of dormant bank accounts that were published in local media houses over the years by the local commercial banks but might have reached a dead end.

He pointed out that Layne did a complete and thorough investigation into the funds right to the doorstep of the ECCB but apparently met a stumbling block there and could not get beyond that point.

Asked about the amount of money in the account belonging to the soldiers, the source said: “I can tell you it was a few thousand dollars well”.

THE NEW TODAY understands that during the final days of the revolution and leading up to the U.S military operation to topple the army leaders who had seized power in the bloody palace coup in which Bishop was executed some funds were taken out of the account.

The source indicated that a Captain in the army ordered one of the persons in charge of the fund to accompany him to the bank with the cheque book in hand to take out monies to purchase mainly lanterns and flashlights for use in the days leading up to the landing of the U.S troops in Grenada.

There are also reports that officials in the bank had also advised the PRA officers in charge of the account to put about $50, 000.00 on a Fixed Deposit account which was done.

Under the Grenada Revolution, the finances of the PRA were also tightly supervised by officials in the Ministry of Finance.

THE NEW TODAY understands that one person associated with the army was sentenced to time in prison for fiddling with the Credit union money belonging to the soldiers.