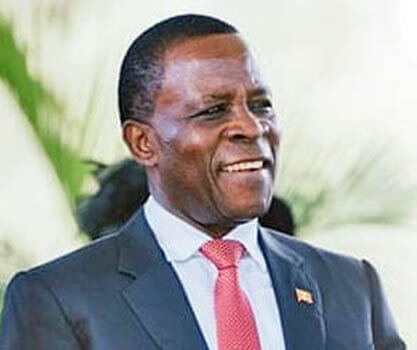 A police officer who served a letter from a local attorney-at-law on Prime Minister Dr. Keith Mitchell has received a serious tongue lashing from members of the High Command of the Royal Grenada Police Force (RGPF).

THE NEW TODAY understands that the letter came from attorney Benjamin Hood, the son of former Attorney General Cajeton Hood and was given to a Bailiff who is attached to the Prosecution Department within the Police Force.

The former Attorney General confirmed that the incident did happen as the Prime Minister took offense to being served a document which could see him hauled before a high court judge to explain why he is refusing to pay cost awarded in a court case that he lost against former Accountant General, Garvey Louison.

There are reports that one member of the Police High Command who is a close relative of the Prime Minister berated the junior officer for trying to serve a legal letter on the island’s longest serving Prime Minister.

According to well-placed sources, the officer was summoned to police headquarters on Fort George by Deputy Commissioner of Police, Michael Francois who is acting as the chief cop in the absence of Edvin Martin who is currently on vacation for two months.

Current head of the Prosecution Department, Superintendent Vannie Curwen who attended the meeting is said to have defended the junior officer on the grounds that he did nothing wrong legally.

Dr. Mitchell had moved the high court to liquidate the now defunct GRENADA TODAY newspaper over a decade ago after the weekly publication failed to pay him over EC$150, 000.00 awarded in a libel suit.

The high court appointed Louison as the Liquidator and after years on the job, the Grenadian leader attempted to remove him and to try and install another accountant, Rupert Agostini as Liquidator.

Louison challenged the Prime Minister’s move against him on the grounds that it touched seriously on his competence and abilities as an accountant and won the case in court.

Over five years later, Dr. Mitchell refused to pay the court-awarded cost to him and in recent weeks the former Accountant General instructed attorney Benjamin Hood to pursue the Grenadian leader for the monies owed to him.

In addition, Louison is also seeking to claim from Prime Minister Mitchell the cost awarded to him after the current head of the ruling New National Party (NNP) government appealed the ruling against him in the higher court but withdrew the matter at the last minute.

According to Hood, he is aware that the Police High Command called in the junior policeman who served the document on the Office of the Prime Minister in the Botanical Gardens and gave him a broadside.

“It is the truth,” said Hood who was approached by THE NEW TODAY for comment on the incident.

The former AG acknowledged that his law firm had been instructed by Louison to try and enforce the court order on cost against the Prime Minister.

He charged that the Prime Minister was angry to the point that he wanted to send out a chilling message to the young police officer – “how dare you serve me.”

“And it wasn’t even him he served – it was the Secretary (in the Office of the Prime Minister,” he said.

“The man (PM Mitchell) refused to take service and he refused to let his Secretary be even served,” he added.

Hood went on to say: “The same thing he (Dr. Mitchell) did when he refused to pay some money (in a court battle that the government lost) and Mike Sylvester was the PS (in the Ministry of Finance) and he refused to come for me (as Attorney General) to do an affidavit. Keith (was) vex with me and I say, Mr. Prime Minister, I ain’t taking nothing that you saying there because if your PS refused to come for us to swear an affidavit, the court has a right to summon him.

The former Attorney-General quoted the Prime Minister as saying back then: “How come the court could dare summon my PS?

“I say Mr. Prime Minister you can’t be saying that – your PS refused to come and do an affidavit – he’s in contempt so the court is entitled to arrest him and put him in jail,” he said.

Hood disclosed that his law firm intends to pursue Prime Minister Mitchell for refusing to honour the two court rulings and the costs awarded against him and in favour of Louison.

“We are going behind him (for the money). We ain’t easing up. When they appealed they withdrew it so the Court hit them with cost – they filed an appeal and tried to withdraw it so the court say you have to pay cost and he refused to pay cost,” he quipped.

“He is ducking service and …remember you have to personally serve them for them to go to jail and everybody afraid to serve him. He ain’t pay so we going to court for the court to make an order for him to pay.

He will have to come to court personally. He can’t send nobody, that’s what he’s afraid of that the Prime Minister has to come and stand up in front of the judge and say why he ain’t pay the money. I ain’t out to embarrass him, I’m only going to make sure that justice is served.” said Hood.