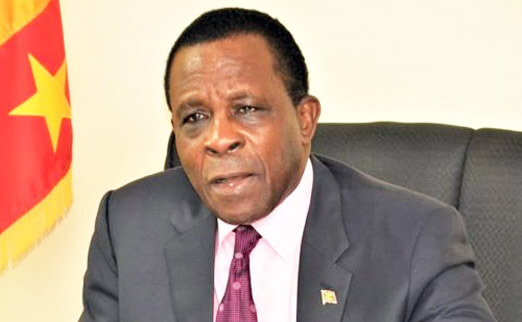 Prime Minister Dr. Keith Mitchell – the Cabinet member with responsibility for the Police

It was just a circus.

That’s how one top member of the Royal Grenada Police Force (RGPF) described a meeting held Wednesday with Prime Minister and Minister of National Security, Dr. Keith Mitchell at the Grenada Trade Center at Morne Rouge in the south of the island.

One top police officer who attended the session told THE NEW TODAY that the Prime Minister merely “ducked” a number of important questions thrown at him by members of the force.

According to one source, the meeting was held amidst one of the tightest security operations ever seen on the island for the longest time.

“All he was doing was evading the questions asked by officers. Some officers asked themselves why they showed up there as it seems like the status quo is the same … when you have to ask questions, the questions aren’t answered,” he said.

THE NEW TODAY understands that some of the questions asked by police officers related to pension for RGPF members at the end of their period of work.

The source said that Prime Minister Mitchell referred to the promise made prior to the 2018 general election that the plan is for government and the state-owned National Insurance Scheme (NIS) to contribute to a pension plan for public sector employees.

Dr. Mitchell told police officers that if government singled them out to get something special then all sections of the public service would expect to be treated similarly.

PM Mitchell also warned that no police officer should call him on the issue of promotion within RGPF which prompted some officers to conclude that “people used to call him before about promotion.”

THE NEW TODAY understands that one issue which brought immediate reaction from police officers was the announcement made by the Prime Minister that Assistant Commissioner of Police (ACP) John Mitchell and Superintendent Esau Pierre were appointed to serve on the Police Promotion Board.

The source said the question was raised by some junior officers how it is that Dr. Mitchell as Prime Minister should be the one making the announcement if he has nothing to do with promotion and that is something that should have come directly from the Commissioner of Police.

He pointed out that there is a fear among police officers that the Executive arm of the government “is the one that is dictating” to RGPF which is recognised in the Constitution as an independent body.

He said that this could never happen under the watch of former Police Commissioner James Clarkson who was quick to tell government leaders to stop interfering in the affairs of the police force.

“This is why I like Clarkson – Clarkson was the straight forward person (who will say), look you cannot come and tell me what to do. That is how you have to run your force.

“I don’t see why the Prime Minister should be there dipping his hands in police thing. We need a kind of Clarkson type Commissioner of Police, one who is not going to bow to the demands of the executive.

During the meeting mention was made by the Prime Minister of some of the infrastructure work done by government to assist the police, especially with the coastguard in the south of the island.

Speculation is rife that PM Mitchell’s visit to meet with police officers is part of his campaign strategy to try and win a sixth term in office in the upcoming general elections.

In recent days, the ageing 75-year old Grenadian leader has been engaged in several engagements which are seen as an attempt to counter the public reaction to the newly elected political leader of the main opposition National Democratic Congress (NDC), 44-year old attorney-at-law, Dickon Mitchell.