Attorney Hood: “….There is an intention to charge everyone” involved… 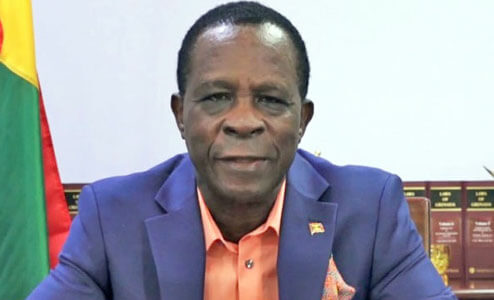 Prime Minister Dr. Keith Mitchell is not optimistic that the issue of oil and gas exploration in Grenadian waters is a matter of high priority for investors.

Speaking to a group of mainly radio media personalities over the weekend, Dr. Mitchell said that the Russian outfit known as Global Petroleum Group (GPG) have been forced to stop drilling in offshore waters due to the coronavirus pandemic that started in 2020.

The promise of millions of dollars in revenue pouring into the Treasury was a major promise made by the ruling New National Party (NNP) in its clean sweep of all 15 seats in the 2018 general election against it main rival, the National Democratic Congress (NDC).

The Prime Minister said that the world has since changed with fossil fuel now being considered as a major problem to the global economy.

“The world has now taken a decision by the year 2034 we want to see almost all fossil fuel out,” he said.

“I cannot tell you if I was an investor in fossil fuel at this time that that will be the best place to put my money when the whole world saying we have to move away from that,” he added.

The Prime Minister pointed out that the production of electric vehicles is the way the world is now going and away from the use of fossil fuel.

Dr Mitchell recalled that when Covid-19 showed up on Grenadian soil, the GPG group had already drilled two wells and had spent “hundreds millions of US dollars to discover that there was “substantial gas that was commercially viable” in offshore waters.

He said that an investor cannot carry a business with only two wells for a long period and needed to have at least five or six wells with gas.

He said the reality of the situation is that several countries around the world were forced to close down their wells because it was not cost-effective to produce due to the impact the virus was having on their economies.

“The guys (GPG) say look at the prices of energy now. If I invest and spend hundreds of millions of dollars now on a well, am going to lose money. So clearly that affected it. As the energy price start to go back upwards, as supplies meet demands what will happen is that the price will continue to go up”.

“The guys have recently contacted us and say they are examining other alternatives to finance their operations”.

“At this point I am not very hopeful that you will see a serious investor starting to drill again immediately until he is satisfied that the output of his investment will be to his best interest”.

In April 2020, the Trinidad Guardian reported the following under the headline banner, “NGC in $3.4b pipeline deal with Grenada”

Against the backdrop of zero per cent projected Gross Domestic Product (GDP) growth, National Gas Company (NGC) is investing some $3.4 billion in a pipeline network to Grenada. The state     company is spending this money on infrastructure although a Russian company exploring the Grenadian wells has already run into financial difficulty.

According to information from NGC and Government’s budget documents, the State company is expected to spend more than $400 million for a technical feasibility study on the gas deal with Grenada.

Global Petroleum Group (GPG), the Russian company that spudded the wells, ran into financial difficulty and is now depending on backing from a Chinese investment company.

Details of the commercial agreement were hammered out last April by NGC’s chairman Gerry Brooks and President Mark Loquan. Both men met with a representative from GPG.

According to the 2019 State Enterprises Investment Programme (SEIP), a feasibility study is being conducted this year and will cost NGC some $406.2 million. At the signing last April, there was no representative from Grenada.

Brooks said then that with the support of the Government, NGC will continue to work closely with GPG and the Government of Grenada as the project progresses.

However, in November, Grenada’s Energy Minister Gregory Bowen said GPG had run into financial problems after the first drilling and could not continue exploring for more wells. He said the company had entered into a partnership with an unnamed Chinese company.

GPG is currently exploring in Grenada waters near the fields of Patao/Dragon in Venezuela and North Coast Marine Area (NCMA) in Trinidad. The company has been granted a development licence for four blocks in the D band of Grenada’s maritime territory.

Almost two weeks after NGC announced the deal, Bowen made an official announcement confirming that Grenada would “push all the gas if Trinidad will buy it.”

Communications manager at NGC Lisa Burkett confirmed the massive spend. She said GPG is authorised to carry out petroleum operations including exploration, development and production of offshore petroleum resources of Grenada.

“In April 2018, NGC finalised a commercial agreement with GPG that in the event of a commercial success of the appraisal and development programme, it will effectively monetise any gas reserves in the fastest possible time utilising NGC’s existing domestic infrastructure as well as leverage out four decades of experience and technical proficiency in pipeline construction and natural gas transportation,” she said.

But that is not NGC’s biggest spend. In 2017, the company undertook the work to upgrade the piers for one of its subsidiary companies and spent more than $330 million on the job. National Energy Corporation of T&T Limited (National Energy), is a wholly owned subsidiary of NGC. According to documents gathered by Guardian Media, NGC upgraded the Labidco Berth II.

The revised estimated cost was $324.9 million, however, the project was completed in fiscal 2017 at a cost of $337.2 million,” documents on the spending stated.

Burkett explained the reason for the hike in the budgeted cost for that job: “The original cost of the project was US $48.7 million (E.C$324.9 million). The additional sum paid represented a 3.7 per cent increase in the original cost.

“The increase was related primarily to the removal of underwater obstructions. These were unexpected obstacles from the old structure that were discovered during the reconstruction of the berth.”

Burkett said immediately after reconstruction, the berth facilitated the load-out of bpTT’s 5,200 Juniper platform in January 2017.

She said in the second quarter of 2017, the berth also facilitated large modules related to the Caribbean Gas Chemical (Gas to Petrochemicals Complex) project.

“In the future, the berth will be primarily used for the exploration of methanol from the CGCL project.

CGCL shareholders are made up of a Mitsubishi consortium including Mitsubishi Gas Chemical Company, Mitsubishi Corporation, Mitsubishi Heavy Industries, NGC and Massy Holdings.

The group’s Methanol and Dimethyl Ether plant is expected to come on stream later this year.