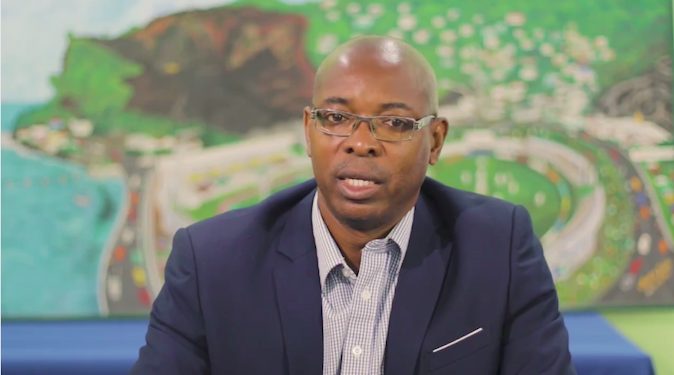 Phillip Telesford – throws his hat back in the ring

Less than 24-hours after dropping out of the race to contest the post of Political Leader of the main opposition National Democratic Congress (NDC) at today’s annual convention of the party, businessman and poultry producer, Phillip Telesford has had another change of position.

Telesford has sent out a message to “all NDC Delegates and Members” informing them of his decision to challenge the two other contenders – attorney-at-law Dickon Mitchell, and former New National Party (NNP) member, Terry Forrester for the top job in the Congress party.

The Caretaker for the St. George South-east constituency had apparently bowed to pressure from the Leadership Search and Development Committee (LSDC) to drop out of the race as it tried to pave the way for the inexperienced Mitchell to land the post of Political Leader of the second largest political party on the island.

Speculation is rife that Telesford has come under increasing pressure from his backers within the party who have been giving him support for the past few months to contest for the top job.

The LSDC has come under fire within the past 24-hours over the manner in which it was seeking to influence the outcome of the election to be held virtually among delegates to give the job to Mitchell.

There are reports within Congress that some members of the top leadership want him in the position on the grounds that he would be able to attract the youth vote and bring substantial finance into the party.

Two other candidates – Forrester and in particular Jason Skeete who is contesting for the post of Public Relations Officer (PRO) against Orlando Romain, a pro-Mitchell candidate, has blasted the committee in the manner in which it sought to get him off the ballot.

Skeete is said to have taken issue with General Secretary, Glen Noel, Party Chairman Terry Moore, female attorney-at-law Claudette Joseph, as well as the New York-based Bernard Bourne when he appeared before committee members earlier in the week.

He accused Noel and Moore of conflict of interest by serving on a committee to vet candidate on the National Executive when they are also interested in positions for themselves.

The controversial Noel is said to be interested in retaining the post of General Secretary while Moore has indicated interest in the position of Deputy Chairman.

Skeete chided Bourne for allegedly making disparaging remarks about a run-in which he had with the law a few years ago.

He also pointed a finger at Joseph over the manner in which she dealt with his application to be selected as one of the delegates in Polling Division 4 for the Town of St. George constituency to participate in today’s party convention.

THE NEW TODAY understands that although Skeete is contesting a position on the National Executive he has been left out from the Delegates list.

During this week’s LSDC meeting with the candidates, Joseph who is said not to hold any official membership on the committee, was seen chairing the meeting at the end as the person doing the job had to leave the session.

As a public service, THE NEW TODAY reproduces in full the Phillip Telesford message to NDC members on his intention to re-enter the race for the post of Political Leader of the NDC at the convention which is due to start around 12.00 p.m. Sunday:

“To all NDC Delegates and Members. This is Philip Telesford your candidate for Political Leader.

My involvement in the political arena is to bring positive changes in the way we conduct our political affairs.

I felt the deep conviction that, to make these changes, I must be (in) a position to influence decision-making.  I do not speak of God lightly, but I firmly believe that I am directed by Him to enter into this arena and so, with the support of my family I offered myself as a candidate for Party Leader.

When suggested by the committee to withdraw my name from contending for the position of Party Leader, I reluctantly agreed, hoping that my compliance, against my deep conviction, would help to bring cohesion to the Party.

As much as I would like to follow these recommendations, my conscience refuses to give me rest.

The questions posed to me were:-

Friends, my conscience would not allow me to continue this debacle. After much prayer and an encounter with God, I am convinced that leaving my name to stand on the ticket for Party Leader is the right thing to do.

Therefore, I will contest for Political Leader with the knowledge that the Most High rules in the affairs of men and gives leadership to whosoever He wills. Win or lose, I will let the voice of the people, whom I hope to lead, be heard.

Permit me to apologise to delegates, members and persons on my team who were disappointed. May I assure you that I stand with you for true transparency and integrity and should I prevail in this, will serve with humility and dependence upon God.

Thank you and best wishes for a very successful convention”.

The NDC has been in the political wilderness for the past eight years following back-to-back 15-0 defeats at the polls to the ruling New National Party (NNP) of Prime Minister Dr. Keith Mitchell.