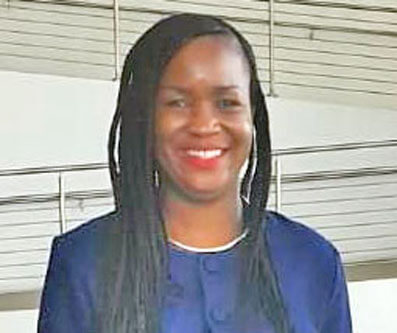 Sen. Tessa St. Cyr - the jurisdiction between scientists, and politicians to manage the COVID-19 situation in Grenada must be carefully looked at

The appointment of Member of Parliament (MP) for St. Patrick West, Anthony Boatswain as Chairman of the COVID-19 sub-committee, is being perceived in some quarters as an attempt by the ruling New National Party (NNP) government of Prime Minister Keith Mitchell to politicise the body, which was reinstituted to serve as an advisory body to Cabinet in its quest to strike a balance between co-existing with and managing the spread of the deadly virus.

Opposition Senator, Tessa St. Cyr addressed the issue during a special sitting of the Upper House of Parliament last week Thursday, as she contributed to the debate on a resolution, which has been approved by both Houses of Parliament to extend the State of Emergency (SOE) in Grenada to May 2022 to allow for government to adjust the COVID-19 regulations for the next six (6) months, inclusive of a lockdown.

While she expressed appreciation that “there is a COVID-19 committee in place, and all the work they are doing,” Sen. St. Cyr pointed out that because the pandemic is a “multi-layered phenomenon” in which “political decision making and scientific endeavours are thoroughly interlaced…the jurisdiction between scientist, and politicians to manage the COVID-19 situation in Grenada must be carefully looked at”.

Although there has been a significant decline in COVID-19 cases, hospitalisations, and deaths, since the August spike in cases, which has paved the way for further easement of COVID-19 restrictions, with more than 75% of the population unvaccinated, health officials expect a “low-level spread of infection” to continue for some time.

President of the Senate, Chester Humphrey, who also serves as a member of the COVID-19 sub-committee, took time during the debate on the SOE resolution to explain that “a curfew can only be imposed when you have a State of Emergency.”

“The State of Emergency is not only to deal with a shutdown (but) is a necessary instrument if you are going to control movement in the population because the right to move freely in the State of Grenada is a fundamental constitutional right…,” he said.

“… To control the activities and movement of people, curfews have been put precisely in place to contain spread…you cannot institute those controls unless there is a       suspension of that right as contained in (the) Constitution, which gives you the mechanism by which that part of civil liberty can be suspended,” he added.

Opposition Senator, Matthew Joseph, who also contributed to last Thursday’s debate cited the need for the MP Boatswain-led COVID-19 Committee to “do a serious evaluation” of how COVID-19 has been managed since it was first discovered on the island in March 2020 and going forward”.

“COVID was imported…it got in through our ports of entry. What was in place there to ensure that it did not get in … so there are a number of things we need to look at, we need to sit down and examine everything that happened in relation to COVID, and let us see where we had weaknesses and strengths so that next time around if it comes, we will be in a better position to deal with it,” Sen. Joseph urged the government-appointed committee.

He also expressed disbelief that health officials have attributed the spike in cases to the carnival-like activities staged by defiant Grenadians in August.

“Mr. Speaker, I am not convinced that Carnival activities were responsible for the spread of COVID-19 as certain people want us to believe. I am convinced that if the proper mitigating actions were taken to prevent it from coming in, that was going to be probably the best idea,” he contended, noting that “last year, we had Carnival activities and we didn’t have that problem.”

Sen. Joseph also took issue with the double standard approach to the implementation of the social distancing protocol, in particular, citing its implementation at the various businesses across the island compared to the business-as-normal approach within the public transportation system.

“You go to any one of the companies to pay a bill it’s six feet distancing…but the same persons after finishing pay the bill, they go into the bus terminus and the bus has 18 (passengers) going home…so you social distance here but 18 in a bus going home – this thing doesn’t make much sense…,” he said.

“So, these are things that we don’t see but these are very important things. The COVID sub-committee and the nation have to ensure as best we can that the virus does not resurface,” he added.