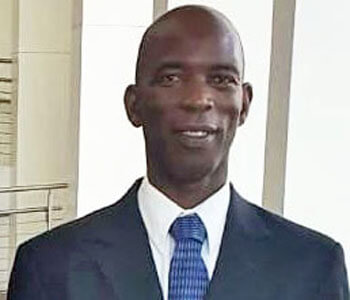 Opposition Leader Tobias Clement has slammed the ruling New National Party (NNP) government of Prime Minister Keith Mitchell, which is currently serving a second consecutive 5-year term in office for its inability to provide its audited financial statements to the Grenada Parliament over the years, a document, which he noted comprises historical data that is critical in preparing a budget statement.

Clement dismissed the EC$1.3 billion budget that was presented to the nation by Finance Minister Gregory Bowen last week Friday, during a sitting of the Lower House of Parliament in St. George’s, as he opened the budget debate on Monday, advancing the argument that the audited financial statement “is the main piece of document” to be reviewed by the Public Accounts Committee (PAC), which is responsible for examining the value for money of government projects, programmes and service delivery in preparing the government’s budget strategy.

“Where is this government’s audited financial statements over the years,” charged Clement in his rebuttal, labeling the 2022 budget statement as being “highly deceptive in its presentation,” and lacking “the innovation and initiative” required to meet the fiscal and social challenges facing the country amidst the COVID-19 pandemic.

“You produce a budget from year to year, and you cannot produce this one (the audited financial statements) …the financial affairs of this government must be put in order, for the sake of the country. Mr. Speaker. I cannot, I cannot for the life of me, after reflecting on this budget, and looking at the finances of government, I do not support the passage of this budget in this house,” Clement told the Speaker of the Lower House, Michael Pierre.

“When you look at the presentation of the budget I see no innovation, I see no initiative…What I see today is the presentation of a document that is cut and paste. The numbers (have) changed a little bit to fit inflation but it is the same template from since 1995 (and) if we have to go somewhere in this country we have to innovate,” argued Clement, who is the current Member of Parliament for the constituency of St. George Northeast, a post he secured on an NNP ticket in the March 2018 General Elections.

The MP who became the Leader of Her Majesty’s Opposition, after resigning from the NNP in November 2019 citing dictatorship concerns, said while you will see “a lot of nice things” in the 2022 budget, “the proof of the budget is in the implementation.”

The Opposition Leader, who also took issue with the continued use of the “tax and spend” construct of the budget that was “given to us by the colonial masters,” also voiced concerns surrounding the ability of the NNP regime to implement major public sector projects in the country, and the use of National Transformation Fund (NTF) resources to roll out capital projects in the form of grants.

Clement cited the previous budget statement in which the “capital expenditure for 2021 was estimated to be 261.7 M, 3% less than 2020 out-turns, 14.4% below the targeted amount,” due to the “slow rollout of some major projects.”

Additionally, he pointed out that “total spending from grant sources (were) estimated at 232.6m, however, “grants spent were lower than anticipated partly because of implementation bottlenecks of grant finance projects (and) slower than expected grant receipts.”

The government expended “195.4m” of the estimated amount, with the NTF, which was established in 2013, to serve as an avenue to transform the economy, finances various projects in Grenada in many industries, including tourism, agriculture, and alternative energy, “contributing 152m out of that,” according to Clement.

The Leader of the Opposition, who had to endure disturbances throughout his presentation due to technical difficulties, called out the Mitchell-led government for using NTF resources “to give itself a grant” to expend on capital projects.

He called for “a full accounting of the National Transformation Fund,” which is financed by approved investors under the controversial Citizenship by Investment (CBI) programme, who are required to make a one-time, non-refundable monetary contribution, the value of which varies depending on the number of dependents.

“I have looked through several budget documents, and most grants I see come from outside sources but here the Government of Grenada is giving itself a grant through the NTF, first time it (has) ever happened,” Clement quipped.

“It is called the National Transformation Fund, and if it is spent on capital projects…it seems that the full strategy of this government is to sell passports and buy concrete and asphalt because that is where most of the money went and even though it was spent that way it was not fully implemented,” he said.

Clement went on: “Is that sustainable in this country at this point? How can the country use this strategy of development selling passports and buying asphalt and concrete?”

The Opposition Leader urged the NNP administration to re-consider options to stir activity in the economy which, according to Finance Minister Bowen is expected to expand by “4.5% next year, driven by strong growth in all major sectors, especially the tourism-related sectors.”

The Opposition Leader expressed the view that while “there is a lot of meat in here for us to chew on” in the 2022 budget, “we have seen the shortfall in terms of implementing major projects” in the previous budget, which serves as evidence that “you (the government) have failed in many respects.”

“If you have an operation, and you cannot implement it Mr. Speaker, it means therefore that the government is not working because what should have been done to stir economic activity in the country was not done,” he told the lower house.

The Finance Minister highlighted 18 major public sector projects including the St. John’s River Flood Mitigation and the Maurice Bishop International Airport (MBIA) Upgrade projects, which are funded by the NTF, as he sought to clarify “serious misinformation” and dispel perceptions surrounding “a lack of transparency and accountability in the use of NTF resources,” in presenting the highly anticipated budget statement last week.

He spoke of an expected “80% implementation rate” of public sector projects by the end of the year, and questioned whether “there is an ulterior motive to discredit the acute management of the country’s financial resources.”

Minister Bowen pointed out that “all NTF spending is approved every year in this honourable house…and is included in the estimates of revenue and expenditure (and that) the NTF regulations are clear on setting aside 40% of all NTF resources for emergencies and debt reduction.”

Providing an update on the CBI programme, the senior government minister said that of the “437 applications received under the programme for the year, 170 are related to contributions to NTF,” with total receipts in the amount of “US$30.6m, as of October 31.”

Minister Bowen affirmed that while the CBI programme was “strengthened significantly during the second half of the year (and) interest in the programme remains strong (and) the government continues to make determined efforts to improve the performance and operations of the programme and ensuring that its integrity and reputation are maintained” with plans to “expand the priority sectors supported under the CBI programme.