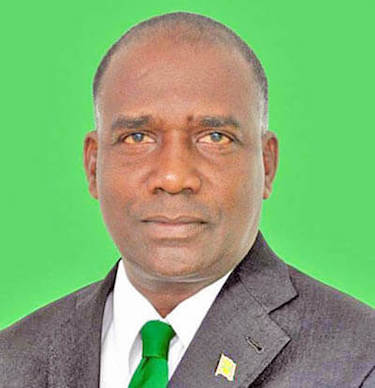 Foreign Minister Oliver Joseph – might be in trouble in St David

Evidence is mounting that moves are afoot to replace Foreign Minister Oliver Joseph as the candidate for the ruling New National Party (NNP) in the upcoming general election.

A well-placed source told THE NEW TODAY that the move to unseat Joseph might have the blessings of Prime Minister Dr. Keith Mitchell who has maintained an iron-fist control over the party since assuming the leadership in 1989.

He said that several “hardcore” NNP political activists were dispatched into the constituency last weekend to get the views of “key and independent-minded supporters” on the performance of their elected Member of Parliament who has been serving since the 2013 general election.

He described the move as nothing but “a smokescreen” to remove the former Trade Minister and ex-Permanent Secretary as a candidate in the election.

Three weeks ago, Grenada’s Ambassador to the United States, Yolande Smith was on the island telling close aides that Prime Minister Mitchell had informed her that she will contest the St David seat in the next election and not Minister Joseph.

There are reports that the minister and the female ambassador held a meeting in the presence of former NNP Candidate for St David in the 2008 general election, Pastor Devon Rachae in which the MP informed her that he intends to contest the seat one more time again.

According to sources, Ambassador Smith reportedly told close aides that she was not too bothered with the position of the senior government minister since she was relying on the commitment allegedly given to her by Prime Minister Mitchell on her candidacy.

The female envoy who has since returned to her base in Washington has also indicated that she intends to be back on the island shortly to position herself for the seat.

There are reports that some party stalwarts are reluctant to go on the campaign trail once again for Minister Joseph due to his failure to deliver on some of his promises made to the constituency.

One NNP supporter confided that a top female political activist vowed that she will not be going out and pulling out voters especially the aged and bed-ridden on Election Day if Minister Joseph was retained as the candidate.

She also alluded to allegations of a few so-called uncomfortable suspicious shady dealings by the senior government minister which might have been brought to the attention of the Grenadian leader.

Joseph was once considered as “the blue eye boy” of Prime Minister Mitchell and was often named on many sub-cabinet committees to engage in negotiations for the administration in St George.

Newly elected Political Leader of the main opposition National Democratic Congress (NDC), Dickon Mitchell has already been named as the party’s hopeful for St David in the upcoming general election.

The 44 year old attorney-at-law by profession is seen in some political circles as a more formidable candidate for Congress in the upcoming polls than former Acting Interim Political Leader, Adrian “Persuader” who lost to Minister Joseph in both the 2013 and 2018 outings.

The ruling party is also known to be having internal squabbling in the rural St Patrick west seat in which the incumbent, former Finance and Education Minister, Anthony Boatswain will not be defending the seat.

THE NEW TODAY understands that a pro-Boatswain faction within the party has been demonstrating hostility to the Caretaker candidate, Senator Victor Phillip out of fears that he might be inclined to replace them with a new team, resulting in lost benefits to them.

Prime Minister Mitchell is said to have sent one of his brothers to work in St Patrick West to try and shore up support for the new NNP Caretaker candidate.

The Grenadian leader has vowed to create political history in the Caribbean by winning 3 straight clean sweeps of seats in general elections.