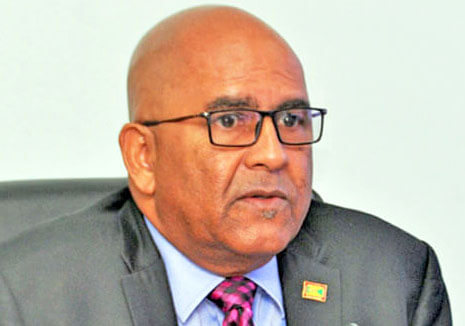 Agriculture Minister Peter David – made the announcement on the merger talks

The Keith Mitchell-led government in the Botanical Gardens in St George is making another attempt to dissolve the Grenada Cocoa Association (GCA) and the Grenada Co-operative Nutmeg Association (GCNA) and to merge them into one body and also to liberalise the industry.

This was disclosed by Agriculture Minister Peter David when he addressed a recent ceremony in which St. George’s University (SGU) signed an agreement with the nutmeg association to help them identify male nutmeg trees at an early stage.

An official of one of the commodity bodies confirmed to THE NEW TODAY that government has written to them on the need to resume negotiations as both the GCNA and GCA representatives had walked out of the talks several months ago.

He said that both farmers’ organisations are not opposed to going back to the table to engage the government on the issues of merger and Liberalisation.

He said the government is clearly “hell bent” on merger and liberalisation but their representatives know exactly what the position of the farmers are on these two contentious issues.

“We will go back – they can’t say we didn’t come and we want to see exactly what they are coming up with,” he told THE NEW TODAY.

“They feel they didn’t get through the first time, they ask for us to come back to discuss. That is not a problem, we could discuss,” he said.

According to the executive member of one of the commodity bodies, the government would not be able to get through easily with their plans to dissolve the two boards and to liberalise the industry.

He said: “I sense that he (PM Mitchell) has promised a number of investors that they will be able to do what they want with the produce. I don’t know what he owes them or not – to me he’s hell bent on (dissolving GCNA and GCA)”.

“Nobody knows – even some of his ministers don’t understand why he’s so persistent. But he’s the chap whatever he says goes,” he added.

Another commodity board member told THE NEW TODAY that his association is not opposed to re-engaging the government side on Merger and Liberalisation.

However, he warned that the merger “is still a long way off” as cocoa farmers in particular are insisting that a number of important issues would have to be cleared up first to move to another stage.

“We have to decide what’s happening with the assets of both organisations first and that will take some time. It is not something that’s close by,” he said.

The farmer indicated that Minister David is fully aware of the position of GCA and GCNA and has agreed “in principle” with the positions although he cannot say it in public that the concerns of the farmers will have to be settled first as part of the way in going forward.

THE NEW TODAY understands that a new 6-man committee has been put together by government to discuss the issue of merger and liberalization with acting Chief Magistrate Teddy St Louis once again appointed to head the team.

The talks first ran into trouble just over a year ago when farmers took strong objection to the draft bill on merger and liberalisation that was prepared by the Office of the Attorney General then under the control of Guyanese barrister-at-law, Darshan Ramdhani.

The bill gave sweeping powers to the Minister of Agriculture to appoint the Directors to serve on a new company that will be created to run the business of nutmeg and cocoa and also to grant licenses to persons and companies for the export of the two commodities.

The farmers on the island have always expressed an interest in discussing the merger issue but are not inclined to see a liberalisation of the industry.

Another bone of contention is related to U.S trained lawyer, Olinga Mitchell who is the son of Prime Minister Mitchell, and known to have an interest in the liberalisation of the industry.

The young Mitchell is part of a company known as Chimera Holdings which was set up to purchase and sell Grenadian nutmegs and spices in Europe.

The company is believed to have gone into liquidation around February 2020 and still owes GCNA EC$144, 000.00 for nutmegs delivered to it.