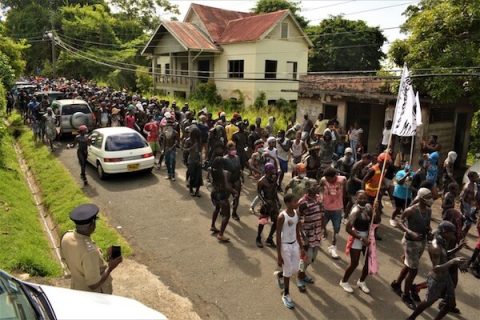 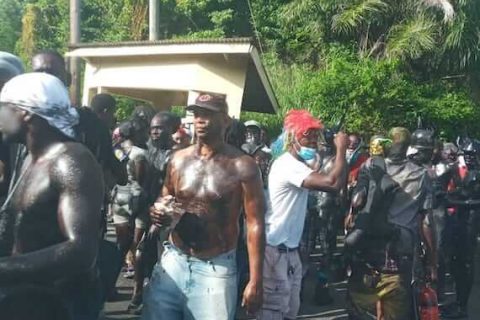 Although carnival activities have been outlawed in Grenada for a second consecutive year due to the Coronavirus pandemic, hundreds of persons took to the streets in many villages around the island to take part in the traditional Monday morning J’ouvert, especially the playing of Jab Jab mas.

From very early Monday morning, masqueraders hit the road in the Paraclete/Mirabeau area in the St. Andrew North-west constituency of Social Development Minister, Delma Charles-Thomas to make the over 5 mile walk to team up with their Jab Jab counterparts coming down from Tivoli in St. Andrew North-east of Kate Lewis, a minister in the ministry of youth.

There was a heavy police presence as the Jabs seemingly engaged in a protest march against the government of Prime Minister Dr. Keith Mitchell which went to Parliament to ban the carnival activities in August and to remove the two days of holidays for the festival.

Most of the protest chants filled with obscenities coming from the lips of the Jabs were directed at the island’s Prime Minister who at 75 is the oldest person to ever occupy the youth portfolio in the country.

“Tell the Ministers f…. away”, and “tell Keith his mother……” were the chants of the youthful masqueraders.

A few of the Jabs had placards in hand with one reading, “No Vote, More Jabs”, and another said “Ah Jab is a Jab”, and “You was Jab, Take Jab”.

The heavy police presence, led by Superintendent of Police, Sylvan McIntyre was not confrontational and most of the times the lawmen were seen engaged in friendly discussions with the Jab Jab leaders.

THE NEW TODAY heard Supt McIntyre urging the Jabs to tone down on the amount of obscenity and to use the streets in a manner in which vehicular traffic will be allowed to flow as freely as possible.

The senior police officer was heard telling one of the Jab Jab leaders that their activity was illegal but the Royal Grenada Police Force (RGPF) will allow them to carry on with the traditional mas.

The police tried without luck to enforce a strategy to get the masqueraders off the street on the main road and to direct them onto the nearby Pearl’s abandoned airstrip to play their mas.

However, a larger Jab Jab section ignored the police directives and insisted that they wanted to get into the town of Grenville to play their mas.

The police were forced to put up a barrier along the narrow strip of road on the Paradise Bridge in order to try and prevent the masqueraders from getting on the other side and gaining access into the Town of Grenville.

There was a lengthy stand-off between the lawmen and the jabs in front of the bridge.

A female masquerader said she would have preferred to see the Jabs going onto the Pearls airstrip since she was confident that the police would allow them to spend the day engaging in their fun and activities unhindered.

THE NEW TODAY also witnessed several dozens of masqueraders engaged in carnival type activities in the Soubise area of St. Andrew South-east which falls under the control of Education Minister Emmalin Pierre and in a couple of spots in St. David’s whose Member of Parliament is Foreign Affairs Minister, Oliver Joseph.

Speculation is rife that tomorrow’s traditional J’ouvert activities in Sauteurs in the extreme north of the island could see another massive showing of jabs.

In 2020, the Jabs came out in large numbers despite the cancellation of the carnival activities and angered Prime Minister Mitchell as most of their venom was directed at him especially through the use of all kinds of filthy language.