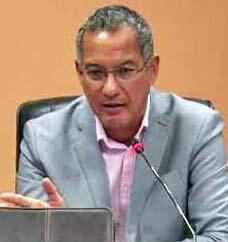 The Keith Mitchell-led ruling New National Party (NNP) regime in the Botanical Gardens at Tanteen has announced the complete removal of the 12 a.m. to 4 a.m. curfew as of Tuesday night.

The move comes despite the government’s contentious vaccine mandate, which is being enforced in various sectors, as part of several restrictive measures aimed at protecting and maintaining public health and safety.

In making the announcement at Tuesday’s post-Cabinet press briefing , Health Minister Nickolas Steele referred to the continued decrease in the positivity rate of the deadly coronavirus over the past few months, which stood at “0.5,” on Monday, compared to the hundreds of cases that were recorded during the August spike.

That figure slightly increased on Wednesday, with the Ministry of Health’s data showing a positivity rate of “0.6%,” after recording one (1) new case.

The data showed that there were 67 active cases and one (1) individual hospitalised as of Wednesday.

Acknowledging the “psychosocial effect (that the curfew has had) on us all,” Minister Steele told reporters that “the balance must always be sought, and at this point, we believe that it is possible to safely remove that curfew based on the psychosocial effect of having a curfew (and) the current epidemiological situation in the country at this point”.

“So, it’s breathing space…and we do hope that this breathing space remains indefinitely but from monitoring, we will adjust accordingly (but) as to how long this will remain, it is based on our monitoring, other external factors, and our social interactions and social behavior,” he explained.

This is the first time the Mitchell government has moved to completely remove the curfew, which it has adjusted from time to time under the State of Emergency regulations , which provides the authority to impose restrictive measures upon the nation.

Minister Steele said: “I think responsible governance necessitates that whenever, and wherever possible that easement is given with an understanding that we are in this together, and if and when God forbids there is a need again to tighten up on one area or another we would do so with that understand of why and that it would be temporary, it would only be there as necessary.”

As the removal of the curfew restriction becomes a reality approximately two (2) weeks before the highly anticipated Christmas holiday even though the majority of the population, about 66% remain unvaccinated, questions have emerged in some quarters concerning the relevance of the government’s coerced vaccine mandates, which has negatively impacted lives and livelihoods.

As it stands now, without proof of vaccination, persons are not allowed to work, or access services in various sectors, a requirement that has sparked public outrage, and feelings of discrimination.

And while the hospitality industry has been successful in getting the majority of its workers vaccinated to keep their jobs, there are sub-sectors that are likely to benefit from tourist arrivals like craft, and spice vendors, who are prevented from operating their booths during the ongoing 2021-2022 cruise ship season on days when ships are visiting because they are unvaccinated.

Patrons were denied access on Monday to the popular Esplanade Mall in St. George’s, which facilitates access to the St. George’s Cruise Ship Terminal, and were told by the security, who was stationed at the entrance that they will not be allowed inside on days when cruise ships visit if they are unable to provide proof of vaccination.

When asked if the government will consider alternative ways to treat unvaccinated individuals, Minister Steele chose to reiterate the government’s position that “vaccines are the best way” to keep the population safe from Covid-19.

“We are racking our brains to find ways to keep our population as safe as possible, and going the extra distance to make sure that all of the tools are available to our population…,” he said.

“It is really heartening, every Saturday I have been volunteering like so many others, going out there to assist in getting people vaccinated, and we are seeing more, and more people come every day to take their first dose, and their second dose – it has been a journey longer and harder than we would have liked but I do see us getting every day close,” he added.

“…It is not in any way meant to deprive individuals of incomes et cetera or anything like that. It is, and I think in fairness, most, if not all of us, can recognise (vaccine mandates) to be efforts to keep the public health situation in Grenada under control,” he told reporters.

Although the curfew restriction is removed, because the country continues to operate under a State of Emergency, which is scheduled to expire in May 2022, the Emergency Powers regulations and Public Health regulations will continue to be enforced.