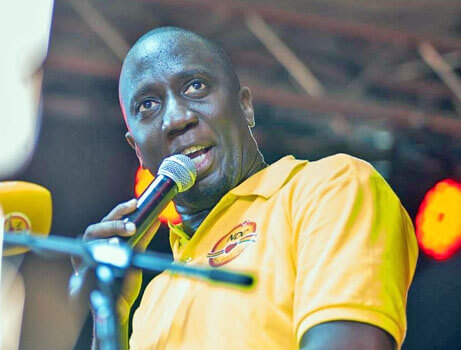 In many countries across this entire universe, youths form some of the most progressive, and militant movements as they fight for equality, social justice, and make in-roads into the space of inclusion.

Those were the words of Jonathan La Crette, candidate for the main opposition National Democratic Congress (NDC) in the St. George North-west constituency, the current stronghold of Prime Minister Keith Mitchell, who has won the seat for his New National Party (NNP) eight (8) consecutive times.

Addressing party supporters, who converged at the River Sallee Playing field in St. Patrick on Sunday to rally around the new team, La Crette said that in the case of Grenada, the youth formed some of the most socially progressive movements in the 1980s.

“…We can do it again, we can do it , your time has come,” he told the gathering as the newlook Congress team led by 44-year-old Attorney-at-law Dickon Mitchell launched its series of major rallies for the political campaign leading up to the June 23 general election.

LaCrette issued a clarion call for the nation’s youth, some of who he said “don’t have access to low-income housing, and are not able to afford a basic standard of living” to rise up this election cycle to become proactive in the process of change that will bring the vote for the NDC on polling day.

The first-time politician took issue with the many unfulfilled promises made by Prime Minister Mitchell and NNP around election time over the years, charging that the regime has been “engaging in fear mongering as a political tool to silence our youth.”

The aspiring Member of Parliament, who contended that “youth unemployment is at its (highest) because of the lack of opportunities” said that “victimisation has become the order of the day in Grenada’s Public Service” and used the opportunity to remind the nation’s youth of their democratic right to speak up and out against the follies of the ruling administration.

“This is a democracy, therefore your voice cannot be taken away from you…they cannot shut you up – it is your democratic right to speak, and therefore as our youth become more aware, we are going to form part of the organised approach to bring the vote on election day.

It is time that our young people rewrite history. 2022, the youthful population of this nation is about to rewrite history and use their finger (as) their declaration of intent. Vote them out, your time has come.”

La Crette was critical of the NNP’s flagship “New IMANI programme”, which is geared to reduce unemployment and provide an avenue for the holistic development of the nation’s youth ages 18-35, through career orientation, and other avenues, and is currently engaging its eighth batch of 1000 trainees, since the programme was introduced in 2013.

According to La Crette, the programme is used as “grounds for potential recruitment for the ruling party,” and “idle threats” have been issued to those who do get into the youth-based programme if they do not vote for, or support the NNP.

He claimed that the 75-year-old Prime Minister, who is the “oldest Youth Minister in the western hemisphere,” and his NNP have also over the years been “fighting the same parents, and grandparents of our young people for pension, gratuity, and docked salaries.”

He also said that the current rulers have crafted “a system of dependency to ensure that our young people remain poor, exposed, and skimmed to the wind.”

Speaking on a political platform in the south of the island on Sunday, Prime Minister Mitchell continued to promote his NNP team as the best option to move the country forward amidst a pandemic, a specter of war in the Far East, and the negative effects that it has had on the entire world’s economy, among other challenges facing the country.

The veteran Grenadian leader also sought to assure the nation that his team is “in a better position now more than ever to expand our empowerment agenda, and spoke of plans to “make the Imani programme more effective.”

Dr. Mitchell also announced plans to “put systems in place to help at least 70% of our graduates to be more able to get involved with their own small business.”

“These times are too crucial, the challenges too large not to leave Grenada in safer hands. These elections are about a few things but at its core, it’s about the consolidation and then the expansion.

We have to ensure that the foundations that we have been building remain secure. We must ensure that we continue the planning that will give our youth more opportunities, our women more assurances and our farmers more assistance….that the most vulnerable persons are not abandoned (and) fresh investments in the economy are coming and are being materialised, and then from there we must expand.

We must build more houses for the people, invest more in our healthcare system and deal a fatal blow to unemployment.”

During a political rally in Mt. Moritz days earlier the longstanding Grenadian leader sought to convince the nation that the NNP “offers the security of tenure that you can take to the bank…in dealing with tough times, and ensuring that Grenada remains on its feet, whether it’s (Hurricane) Ivan (in 2004) or the pandemic, all of these are well known, and documented.”

PM Mitchell, who has stated that this will be his last election cycle to bring an end his political career with the legacy of being the longest-serving Prime Minister in the Spice Isle with two (2) consecutive clean slate victories under his belt, is hoping to sway the electorate to give him “one more for the road” in the upcoming poll.

The Prime Minister indicated that his “task in this campaign is to ensure that this team of young leaders” who have “already shown what their worth “are ready for the transition that is coming.”

“They have showcased the capacity to make us confident that Grenada will remain in safe and secure hands…” he said, while commending the likes of first-term MPs Kindra Mathurine-Stewart, Kate Lewis, and Norland Cox, and the newest member of the team, former New York policeman, Nimrod Ollivierre, who was selected as the candidate to contest the St. George North-east seat currently held by Tobias Clement, who won the seat in 2018 on an NNP ticket but later resigned from the party.

He hinted that the NNP team of young leaders are superior to what is on offer on the Congress side, especially its new leader, 44-year old attorney-at-law, Dickon Mitchell who is entering the political arena for the very first time.

“We have a cadre of young, and experienced leaders who have already chalked up years of experience in the field. And importantly, most of the team are women, and all of them have what that person (Dickon Mitchell) doesn’t have, a connection to ordinary people. He doesn’t have a history of fighting for the little people, he has a history of fighting for the corporate world who he wants to abandon now because he wants to pretend he loves working people,” he said.

Dickon Mitchell is aspiring to become the second-youngest Prime Minister of Grenada after the legendary Maurice Bishop, who was the youngest serving Grenadian leader at the age of 34.

PM Mitchell is highly critical of the NDC team being presented as the alternative, which comprises a mixture of youth, and middle-aged individuals who he noted have “never held public office before,” which is “unprecedented” in the history of national politics,” contending that they are “inadequate and unprepared for the times.”

“They (NDC) are offering a slate where absolutely no one has ever held any serious public or political office or (is) known to be involved in any type of national community service…never in the history of national politics has a so-called major party put up a slate of candidates (that is) so inadequate for our times, so inexperienced, untried, and untested, and just the thought of that must be frightening to every one of us,” PM Mitchell told supporters.

In an interview with the host of the NDC Heartbeat radio programme, Deputy Political Leader of NDC, Adrian Thomas expressed the view that it is not a fair comment to make that the party lacks experience” as being articulated by Prime Minister Mitchell.

According to Thomas, the young people in the country are energetic, and want to move forward, as they have ideas and support behind them.

“I don’t think it’s a fair comment to make to the Grenadian people. I think it’s a comment to try to mislead the people into believing that when you are young you cannot do anything…,” he said.

Congress leader Dickon Mitchell has also cited the need to “raise the standard of political rhetoric in the country towards that of the issues, and how we are going to solve the challenges that we face.”

The NDC boss said that his party is “not going to get involved in the gutter politics” in its ambition to replace NNP as the government of the day after the June 23 poll.

“We are not going to be personally maligning anybody…we are about the issues,” said the Congress leader, who instead offered to make himself, and his team available for a national debate with the incumbent on the issues that are affecting the country.

Dickon Mitchell will be contesting the St. David seat, where he is hoping to unseat the 2-times MP, Foreign Minister Oliver Joseph.