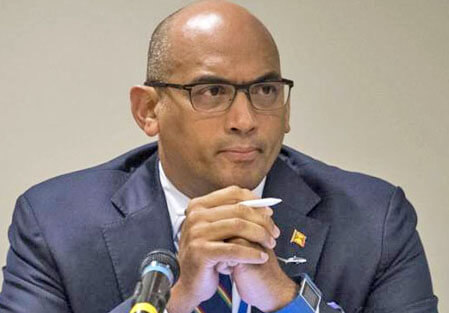 Dr. Angus Friday – his name is floating around in the top echelon of the NNP party

According to well-placed sources, Friday’s name was floated in front of a committee involving former Finance Minister Anthony Boatswain that has the responsibility to look at potential successors to Dr. Mitchell who has been in charge of the ruling New National Party (NNP) for the past 32 years.

Mitchell’s ruling party has been forced to address the issue of a much younger leader to take charge of the party following the decision of the main opposition National Democratic Congress (NDC) to entrust its leadership in the hands of 44 year old barrister-at-law, Dickon Mitchell at its October 31 convention.

PM Mitchell has already indicated that he will be leading NNP into the next general election, which could be his last.

THE NEW TODAY first heard Friday’s name being mentioned a few weeks ago as a possible successor to Dr. Mitchell from top NNP supporters in New York.

One NNP insider said that the party is “very concerned” about the support that the new Congress leader is getting from a wide cross section of Grenadians at home and in the Diaspora.

He spoke of the top brass of the NNP leadership worried that Dickon Mitchell might be able to attract a large portion of the youth vote including some from the ruling party and pose a problem for the Keith Mitchell-led outfit in the upcoming general election.

He said the Boatswain-led NNP Transition committee has not been able to come up with a positive replacement for PM Mitchell at the moment and is currently on the hunt for someone who can match Dickon Mitchell’s formidable intellect.

He indicated that Dr. Friday, who has no experience in frontline politics, might not be the ideal candidate to engage in a one-and-one battle with the new Congress leader as the NNP is short on talent at the moment with its young brigade.

He said that the entrance of Dickon Mitchell on the political landscape has now forced the ruling party to look for “new young blood” outside the likes of Education Minister Emmalin Pierre and Foreign Minister Oliver Joseph.

According to the source, over the years the United Kingdom-based lawyer Akima Paul from Victoria was being considered as a future leader of the NNP but she is no longer high on the list of contenders.

He said that Paul appears not inclined to come back to Grenada to live at the moment and the ruling party has no choice but to move on without her at this point in time.

He also ruled out former Congress General Secretary and current NNP Member of Parliament for the town of St George, Peter David getting the nod as the next Political Leader of NNP.

The source said that David will never be accepted as leader of the ruling party given his years of association with NDC.

THE NEW TODAY was also told that the NNP hierarchy has issued instructions to its youth leaders to “hit the ground” and start engaging persons at the community level in order to combat the new wave of support being created for NDC by its new leader.

Dickon Mitchell has been visible in the rural areas of the country especially St. Andrew and St Patrick meeting with constituency groups and influential community leaders since taking over as the new NDC leader.

The next general election is constitutionally due in 2023 but political analysts are predicting the poll could be held sometime around June next year for the latest.

Dr. Mitchell has won more general elections than any other political leader in the country’s history since contesting his first election back in 1972 on a ticket of the now defunct Grenada National Party (GNP) in St George North-west when he lost against Finance Minister George Hosten of the Grenada United Labour Party (GULP) of late Prime Minister Sir Eric Gairy.