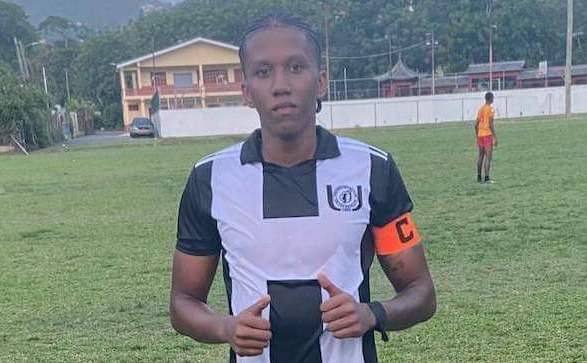 Young Grenadian footballer Ronaldo Joseph flew out of the island today to pick up a 3-year sports/academic scholarship with Western Illinois University in the United States of America.

The 19-year old Joseph has represented Grenada in U-15, U-17 and U-20 levels, also played for the Queen’s Park Rangers for over 10 years and is currently enlisted with Fontenoy United.

Speaking with THE NEW TODAY before boarding the plane, Joseph said that the scholarship provides “a great opportunity” as it “opens so many windows” for him to fulfil his boyhood dream.

“I have been working on it for a very long time. Since secondary school I have made up my mind to it,” he said.

According to the young national footballer, he had developed a plan at a very young age on how to further his academic and sporting talents and that he is aware of the fact that he has to balance both the academics and the sports at the University of Western Illinois.

He praised his father, former senior civil servant with the Customs Department for several years, Brian Joseph, as well as his mother Margaret Benjamin, sister Rhenisha Joseph, the Grenada Football Association (GFA) along with Fontenoy United which helped him along the way especially with the recovery from a serious and “scary injury” to his foot on the soccer field a few months ago.

“My dad has been there with me and working with me on mornings and encouraging me to do my best – even my mom as well and my sister helped me through the whole process,” he remarked.

The Mt. Rush, St. George resident will be pursuing a Bachelor’s Degree in Accounting, as well as playing for Western Illinois University Leathernecks soccer team.

THE NEW TODAY understands that GFA made a financial donation and provided some tokens to the young national footballer prior to his departure from the island.

A family member also thanked the coach and team members of both Fontenoy United and Queen’s Park Rangers and the Mt Rush community for their support to young Ronaldo in his efforts to pick up the overseas scholarship.

The footballer has an impressive academic record from Westmorland Secondary School with 10 CXC subjects and was short-listed for the 2019 T.A Marryshow Memorial Award for outstanding students across the island.