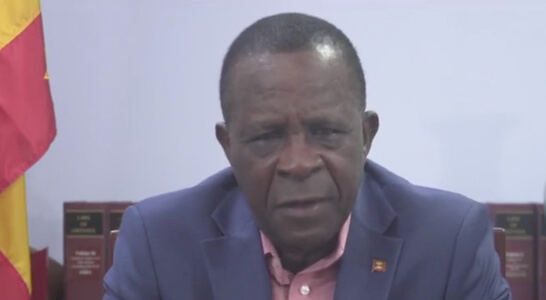 An extension of the nightly curfew by an additional four hours is among measures announced Friday night by Prime Minister Dr. Keith Mitchell to address a sharp increase in Covid-19 cases in recent days in Grenada.

In a national radio and television broadcast, the Prime Minister said the island now has 30 active cases with 20 of the affected persons not having a history of travel outside of the country which confirms local transmission of this dreaded disease.

Dr. Mitchell disclosed that two of the new positive cases are minors, one as young as five years old and that more than 140 persons are currently in isolation as health officials continue the arduous task of tracing the contacts of the infected and getting them tested.

“… We have arrived at a critical juncture in our fight against COVID-19,” he told Grenadians, adding that, “the risk of exposure (to the virus) has never been greater”.

“Our backs are against the wall, but as responsible leaders, we will take the necessary actions, maybe sometimes unpopular ones, to continue safe-guarding the people of our beloved country,” he said.

The Prime Minister indicated that the Covid-19 situation in Grenada “could get worse, before it gets better, but we remain prayerful and steadfast.”

Dr. Mitchell said that officials from the Ministry of Health have discovered “the emergence of what appeared to be a cluster of cases, linked to a number of unauthorised social activities.”

He mentioned that three Covid-19 clusters have so far been identified and are directly linked to private parties and unauthorised events held in St. John, St. George North West and St. George North East, attended by more than 20 persons.

He said that none of these activities were granted permission by the Royal Grenada Police Force (RGPF) and there was general non-compliance with established protocols by those involved.

In addition, he said that some of the same individuals who attended these events and tested positive, also participated in carnival-like activities in Gouyave and Sauteurs during the last week.

“In short, sisters and brothers, we had a series of super-spreader events during the week of August 8-15, said the Prime Minister in the address which came hours after holding an emergency meeting of Cabinet to look at measures to deal with the emerging Covid-19 crisis on the island.

The Grenadian leader confirmed that it was the Delta Variant of the Covid-19 virus that was sweeping through the island and warned that the number of infected persons on the island could rise further in the coming days.

Prime Minister Mitchell announced the COVID-19 Regulations will now be changed to shift the curfew hours from midnight to 4.00 a.m to instead 9.00 p.m. to 4.00 a.m. with effect from Saturday night.

He said that all approvals already granted by the police force for social events, including private parties, bus tours and boat rides, within the next two weeks, have been rescinded, with immediate effect.

“…There should be no social gatherings, inclusive of weddings and funerals, with more than 20 persons present and which do not comply with the stipulated protocols,” he said.

“These measures will remain in effect until September 3, 2021 and I encourage full compliance as the revised protocols are intended to protect us all,” he added.

The Prime Minister told Grenadians that the announced measures “are not intended to be punitive, they are necessary actions which we believe will help to contain the spread of COVID-19 here in Grenada”.

“…This pandemic, and more so, the emergence of variants such as Delta which are far more transmissible and deadly, require swift and decisive action to save lives. And this is exactly what Government intends to do, with the measures announced.

PM Mitchell also used the occasion of the national address to encourage Grenadians to get vaccinated against Covid-19 since the numbers are “unacceptably low” with just close to 18,000 persons of a population of 112,000 persons taking he AstraZeneca shot that is available.

He said the island has taken possession of a second vaccine, with the U.S government making a generous donation of 29,250 doses of the Pfizer vaccine.

He announced that the Ministry of Health will begin administering this vaccine from Monday (August 23) and Grenadians will now have two options from which they can choose and that parents for the first time now have an opportunity to protect their children as young as 12 years old.

Dr. Mitchell called for the nation to come together to work together for “the common good” to defeat the virus.

“We cannot afford complacency, we cannot afford irresponsible behaviour, we cannot afford wanton disregard for the recommended protocols and the rule of law; this is a battle to be fought on multiple fronts. My friends, let us work together, we can win this war, COVID-19 will not defeat us,” he said.

“We must work together, we must unite, we must synchronise our efforts, particularly during this challenging period,” he added.

The Prime Minister made an appeal to the Social Partners in Grenada like the churches, private sector groupings, trade unions and non-governmental organisations and all persons of influence in the society to assist by being more vocal in the fight against COVID-19.

“Your choice to lend your voice could mean the difference in whether or not we continue to wage a successful battle against this dreaded disease, which is unrelenting in its attack on human beings around the world,” he said.

Grenada has recorded 211 cases of Covid-19 since the start of the pandemic in March 2020.