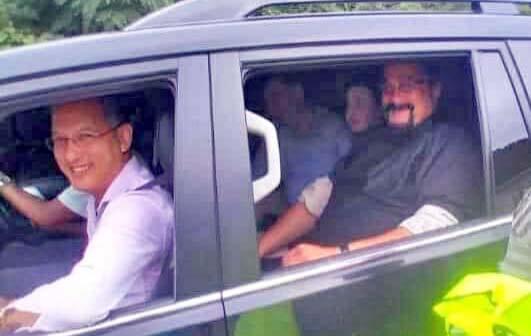 The controversial photo on Social Media platform of Minister of Health, Nickolas Steele together with U.S actor Steven Segal in a vehicle without wearing masks

International movie star Steven Seagal is among a group of people who are expected to be ticketed for violating COVID-19 protocols on the Caribbean island of Grenada.

Seagal was photographed traveling in a vehicle along with the Minister of Health Nickolas Steele and three other people, none of whom were wearing masks, in violation of regulations.

The action star also appeared in photos with other senior government ministers, karate practitioners and tourism authority officers, also not wearing their masks.

On Tuesday, the health minister disclosed that all the people who were in the vehicle with him will receive fixed penalty tickets.

“I will pay my charge. I will receive my charge for not wearing a mask in public and we will move on. The other people in the vehicle will pay their charge,” Steele said during a government news conference Tuesday.

Minister Steele excused his breach of the protocol by saying, “It’s been fifteen months, (and) I dropped my guard”.

The breach by the minister and the movie star happened in the midst of Grenada’s second wave of COVID-19 as health officials rush to try and contain an outbreak that has now reached almost fifty confirmed cases.

Seagal did not wear a mask at any of the places he appeared and was photographed, including the high end Silver Sands Hotel, and an unnamed construction project.

Seagal, famous for his role in movies such as “Above the Law” and his qualifications in martial arts, is said to have been in Grenada to discuss investment opportunities including the building of a movie studio on the island.

The Hollywood star, who has been linked to numerous allegations of sex crimes, met with Arts and Culture Minister Yolande Bain-Horsford, who also appeared without a mask on.

The star has been accused of raping teenagers and sexually molesting female Hollywood stars.

THE NEW TODAY could not immediately confirm if the movie star and his companions are still on the island to actually receive the tickets.

Last Friday, activist Earl Maitland wrote to the Commissioner of Police, bringing the protocol breaches to his attention and requesting action.