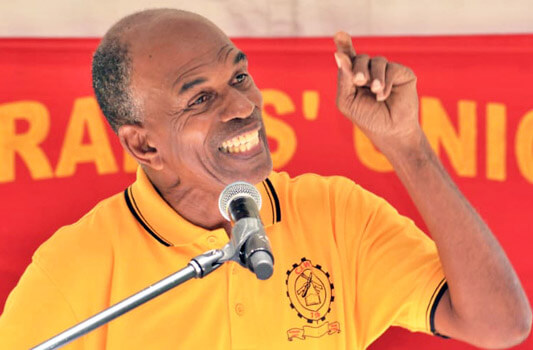 President of the Commercial & Industrial Workers Union (CIWU), George Mason has warned the Keith Mitchell-led government that other unions on the island are fully behind those public sector unions who have won a court battle for the payment of State pension for their membership.

Speaking at the annual Labour Day celebrations on Sunday, Mason said the court has finally cleared the way for the payment of pension to public sector employees and the only issue now is the payment plan in keeping with the order of the court.

This seems to be a rejection of the assignment given by the Mitchell-led government to a 5-member committee headed by former Permanent Secretary in the Ministry of Finance, Dr. Linus Spencer Thomas to look at all aspects of the ruling.

Labour Day was celebrated under the theme, “Grenada Trades Union Council promoting workers unity, consolidating and advancing the gains in these challenging times.”

In a fiery address, Mason was critical of the shortage of staff at the Ministry of Labour to handle industrial relations matters in the country and called for the ministry to be treated with respect by government.

He accused the Mitchell-led regime of treating the Ministry of Labour as “an outside child” and not giving Minister Peter David the tools to do the job at hand.

“We call on the Prime Minister to give the ministry all the necessary resources it needs – both Human resources and material and technical resources…,” he said.

The CIWU President charged that too many matters are brought to the Labour Department and get stuck there for too long.

In addition, he said that some issues involving labour and employers are reconciled by the Labour Commissioner Cyrus Griffith but the trade unions often wonder if these were the recommendations that were arrived at in front of them when the final decision is handed out.

Mason said at times the unions get the feeling that “the letter seems to come from the pen of the employer” in outlining the agreements that were arrived at in meetings with the Labour Commissioner.

The CIWU President also addressed an issue with the cooks employed by the Ministry of Education for the School Feeding programme.

He cited the case of a cook who retired from the job recently after working for over 39 years and was taking home less than $1000.00 a month while other cooks who have been in the system for over 20 years are going home with between $800 and $900 a month.

“The Minister of Education (Emmalin Pierre) should be ashamed,” he said.

The CIWU boss also called on PM Mitchell to allocate some of the US$30 million given to government by St George’s University (SGU) as payment to government for selling of shares to give it to the cooks to upgrade their salaries.

“Mr. PM, you were told to do whatever you want with the money and you said that the Cabinet did not work out how to spend it yet when you were asked about it and I’m giving you that as your first order, your first duty – put some money aside for the School Feeding programme.

Mason explained that these low salaries are resulting in some of the employees “taking” home some of the items in the school feeding programme.

He said that he was not condoning the act like the theft of curry and other items but was only pointing out that this was responsible for the problem within the programme.

Mason told workers that his 2022 Labour Day address might be the last in his capacity as President of CIWU, hinting at possible retirement.