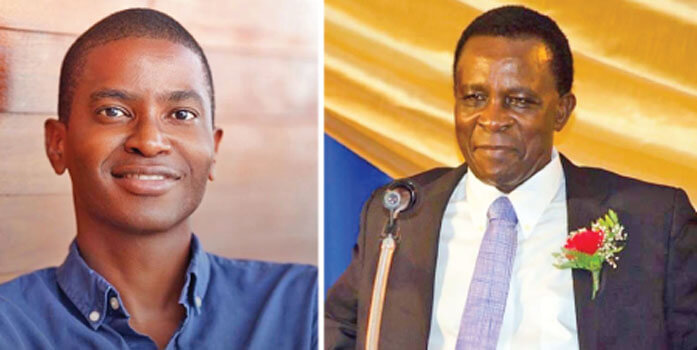 Dickon Mitchell (L) - marijuana legalisation is the way to go; Prime Minister  Keith Mitchell (R) - is accused of moving to decriminalise marijuana in a bid to secure votes in the upcoming General Elections

It’s a desperate attempt to secure votes among the nation’s youth in the upcoming General Elections.

This is how many view the latest move by the ruling New National Party (NNP) government of Prime Minister Keith Mitchell to enforce legislation for the decriminalisation of marijuana ahead of the next General elections, which is constitutionally due in 2023.

During his first press conference for the year last week Wednesday, PM Mitchell, who had previously rejected the idea to permit the local cultivation and use of marijuana, confirmed that a Paper will be laid before Parliament for public discussion to provide for the limited use, and cultivation of marijuana for medicinal purposes, and other basic purposes, including recreationally.

“ If you had asked me this question 10 years ago, my flat answer would be I not in that. But clearly, like everything else in life, you have become more informed, and circumstances change that has changed your views, and you have to be man enough to admit when your views have come around to a different position,” PM Mitchell told reporters.

When you have an issue of importance for the country economically and otherwise, we should not be thinking about votes in the process of making that decision,” said the 75-year old Grenadian leader .

However, there are those who hold the view that the time for decriminalisation has long passed, and that “in 2022, we should be speaking about legalisation to create the much-needed jobs that are available within this industry.

Political Activist Kem Jones is among those involved in the debate on the controversial issue, and who questioned the timing of the move by the NNP regime.

During his Eagle’s Eye Talk Show program on Tuesday, Jones voiced strong opposition to the decriminalisation of the illegal herb, which is also called cannabis, ganga, weed, and pot, to name a few, and instead called for marijuana legalisation, noting that the marijuana industry has the potential to create over “10, 000 jobs for our young people.”

” Any party who in 2022 is speaking about decriminalising cannabis ain’t ready yet when it comes to that particular issue. It has to be legalisation because you are thinking about creating decent jobs for our young people,” argued Jones, who concurred with the opinion that the NNP’s move to decriminalise the illegal herb is “an election ploy” in a desperate attempt to secure votes.

“It is clear this government, this party is all about votes, the election is not far away, and as a result, they are pushing very hard…,” said Jones, who encouraged citizens to “start thinking deep” and to reason with “higher intellect,” explaining that “when they (the government) decriminalise, they are actually saying that it is for smoking.

“Don’t let them fool you…I am saying we have to move from that place where it’s all about smoking (and) planting a few ganga trees for personal use, and think about the economic benefits”.

“I am thinking more about employment, finding the market for cannabis oil, soap and other products and exporting it to get foreign revenue,” contended Jones who noted that while “there will be persons who would set up facilities for recreational purposes, you cannot generate plenty money out of that.”

The Political activist, who advocated for smoking to be “banned in public places” warned that “we should not fall victim to what NNP is proposing, arguing that decriminalisation would only provide an avenue for the “big boys” to capitalise on.

“We know that there are certain individuals closely associated with this regime who already started preparing for that decriminalisation Act that would come…there are some big boys out there whose children are already started buying up and leasing lands in preparation; some of them playing they planting cane, they planting this, and they planting that in preparation for the decriminalisation of cannabis, and in that legislation you would have to go to a Minister of government to seek to get a license; and they would get it but what about the small man, the simple people who should benefit from this industry?”

“We need to legalise it so that the small man will benefit…it’s a big industry…it is very huge. So, you want the simple man to (also) benefit from it. Not (just) the Minister’s son, or the Minister’s son’s friends, or a certain group of people, the big boys. No! So, we must stand our ground, start articulating deep. We have to understand the intentions of those people who are pushing decriminalisation (and) we must push legalisation so our ordinary people can benefit from this industry. Enough is Enough.

“We need to throw a lot of cold water on the NNPs proposal of decriminalisation,” added Jones who holds the view that “if you say to people, well, you can carry four (4) spliffs or plant four (4) trees, they would plant, and carry more”.

“So, the young people would still end up before the court for cannabis if you decriminalise it setting those kinds of parameters,” he argued.

“You need to legalise it and regulate it in such a way that revenues can be generated from it (and) our government will be able to get the revenue required to fix our roads, schools, hospitals, and clinics, to pay our public officers and we could go on and on…” he said.

Last April, Agriculture Minister Peter David, who is on the 3-member committee that was tasked by the Cabinet of Ministers to come up with the best way Grenada can enforce aspects of Caricom’s Marijuana commission report, along with Health Minister Nickolas Steele and Attorney General Dia Forrester, explained that the idea of decriminalisation is for people to not have a criminal record for small portions.

Minister David, who noted that mass cultivation of cannabis for industrial purposes is a larger and more difficult discussion, explained that “the first step is not going to be for mass production”.

The Political Leader of the National Democratic Congress (NDC) Dickon Mitchell has expressed the view that although the government is moving to change its policy, the approach is still “backward, and still regressive in so far as a draft bill has been tabled in Parliament.

He pointed to an “amendment to the Drug Abuse Control and Prevention Bill,” which seeks to “say in a very limited sense if someone has 24 grams of marijuana in his possession, or if someone plants no more than five (5) marijuana trees it is no longer a criminal offense. In addition, if someone is of the Rastafarian faith he is permitted to use marijuana…”

Dickon Mitchell, who was at the time speaking as a guest on a local radio programme on Tuesday, stated that “the hemp plant is one of the most versatile in the world,” from which “you can make paper, rope (and) there are a number of things,” and contended that “we need to go way beyond that (which is being proposed in the bill), and expand the scope of it.”

Responding to questions posed, Dickon Mitchell explained that the NDCs position for a “progressive approach to the marijuana industry is not in an attempt to get votes.”

“I think it’s the other way around because we are finally beginning to see some change in policy on behalf of the government,” he said, noting that the main opposition party is “not interested in playing political football or doing things for political expedience.”

He added: “We are saying legalise it, regulate it because the current system, all it does is that it leaves the huge profits in the hands of the criminals because marijuana exists, people are smoking it, people are using it – cultivating it in large amounts, they are importing, supplying, exporting, and selling it, and if tax revenues are generated to the state from that instead we are taking our resources and giving it to the police, and the judiciary to try and arrest a few persons who oftentimes are the small players in the game.”   This, the NDC leader described, as a “backward” approach, and “a misallocation of the state’s resources.”

“Grenada has frankly been left behind when it comes to the issue of a progressive approach to marijuana,” Dickon Mitchell said, as he stressed that “many of our neighbouring countries have leapfrogged ahead of us” to join other countries around the world which have changed their policy approach on the issue.