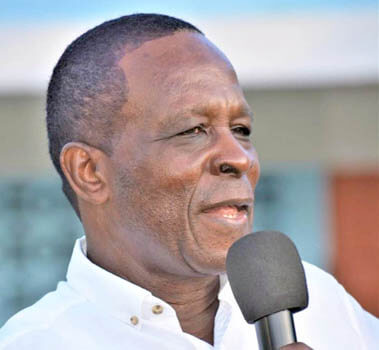 As the country heads into a politically-charged period with elections close at hand, Prime Minister Dr. Keith Mitchell has sought to give assurances that his ruling New National Party (NNP) administration is well-poised to provide the leadership that is needed to navigate the country especially in these times of crisis.

Alluding to the country’s recovering economy at what is hoped to be the tail-end of the COVID-19 pandemic, which is now being threatened by the Russia/Ukraine war, the Prime Minister in an address to the nation last week Thursday reiterated his government’s commitment to the relief measures that were announced in the 2022 budget.

He told Grenadians that considerations were also being given to “even looking at some other sectors to expand the assistance” to help safeguard lives and livelihoods.

The announcement by the Grenadian leader came approximately two (2) days after Finance Minister Gregory Bowen warned reporters at last week Tuesday’s post-Cabinet media briefing that the government is considering increasing the EC$15.00 cap on gas that was implemented as a relief measure in December.

According to Minister Bowen, the number two man in the NNP government, the regime in St George could lose an estimated EC$28 million if the cap is sustained amidst surging oil prices on the global market.

Prime Minister Mitchell noted that “Russia’s war in Ukraine has not only upended the world order, but has ushered in a new era of uncertainty amidst the specter of a conflict with the potential to widen.”

He said that the “emerging period calls for experience, and steady leadership” and spoke of his government’s intention “to continue to provide that tried and trusted leadership to the people of Grenada, Carriacou and Petite Martinique.”

The incumbent leader, who confirmed the removal of all COVID-19 restrictions on April 4 affirmed that Grenadians can “rest assured that this government will not abandon its people,” and announced plans to continue to build the nation on “the hope that sustained us through hurricanes and political upheavals.”

“We have a team of national, and economic planners working overtime, and with the resilience we have shown through the years, we are extremely confident that we can face any new challenges head-on…with solid leadership in place, we are confident that we can successfully navigate this new global crisis.

“We are determined to fashion policies that will provide a buffer, especially for the most vulnerable that will be battered by the economic storm brewing on the horizon…we cannot guarantee that it will be easy, but we can take our history of steady leadership to the bank, particularly in times of crisis.

The question of leadership or who is fit to lead has been heavily articulated by the NNP leaders in recent weeks and is a topic that has generated increased debate on local radio programmes, and among the nation’s populace, since last October, when the main opposition National Democratic Congress (NDC) elected 44 year old Barrister-at-Law Dickon Mitchell as its new leader, a newcomer to politics, and the youngest person to lead the political organisation.

Congress is looking to Dickon Mitchell to bring an end to a situation in which the party suffered back-to-back 15-0 loss at the polls in both 2013, and 2018 general elections.

One of the newcomers to NDC along with its new leader is former School Principal and Businessman, Johnathan La Crette, who is among nine (9) relatively young candidates selected to contest the next national poll.

La Crette has dismissed perceptions that attempt to define the NDC candidates as a team of “novices.”

Appearing as a guest on Sunday’s “The Bubb Report”podcast, the NDC candidate stated that “the leadership dialogue is a farse,” and a “smokescreen at this particular point in time to really, distract the electorate from seeing the true potential, and purpose of the candidates who are being presented to the electorate as an alternative to the current administration.”

“I don’t think that it’s a dialogue that is substantial or worth having,” said La Crette, who argued that there is no right or wrong time for someone willing and able to enter the political field.

“We must start somewhere…I look at our current parliamentarians, a number of them came into the political arena in their 20’s (because) somebody saw the potential that they had, and decided to invest and harness that potential, whether or not it was good for politics or the development of the country…and as a result these parliamentarians grew over the years in their political craft. So, they had to start somewhere (and) we are starting somewhere,” he remarked.

He recalled the time when Prime Minister Mitchell had his first brush in local politics as a 26 year old candidate of the now-defunct Grenada National Party (GNP) of late Prime Minister Herbert Blaize and lost the battle for St George North-west against Finance Minister George Hosten of the all-conquering Grenada United Labour Party (GULP) of the Father of Independence, Sir Eric Matthew Gairy.

La Crette will challenge the battle-tested PM Mitchell at the upcoming poll for the St. George North-west seat, which he has won for an unbroken eight (8) times making him the longest-serving MP for the area.

As he addressed party supporters in the constituency during an event that formed part of island-wide celebrations to observe the NNP’s fourth year in office since winning its second consecutive landslide victory in the March 2018 poll, Prime Minister Mitchell thanked his constituents for the parliamentary support over the years and asked for their support one last time before ending his long political career.

However, La Crette expressed bewilderment that PM Mitchell, has led for almost four (4) decades at the constituency level, and almost three (3) decades at the Prime Ministership level, and “yet for all, at the end of all those years he (PM Mitchell) cannot find a suitable successor.”

Noting that these are “serious times,” La Crette said the Mitchell-led regime has failed to prove themselves over the years, and spoke of there being “some gaps that need to be closed economically, socially and otherwise.”

“We have given this current administration almost 25 to 30 years to prove themselves as competent, effective, and efficient administrators, leaders, and managers of the state, and by and large they have not done so. In fact there are some proponents who feel that we are living in a failed state because of the kind of leadership that we now experience,” he said.

La Crette used the opportunity to advance the NDC’s belief that a change in government is definitely needed at this time for the development of an economic model that is flexible post-pandemic, so that we can definitely speak to the survivability of the people of Grenada, Carriacou and Petite Martinique right now, and also make it sustainable for future generations.”