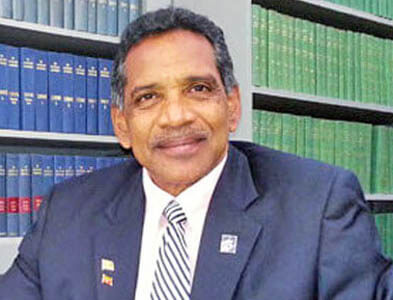 Lawyers representing public sector unions in Grenada have politely told a delegation from the Washington–based International Monetary Fund (IMF) that they should not be talking to them about the high court ruling in favour of civil servants on pension payments.

The Public Workers Union (PWU), the Grenada Union of Teachers (GUT) and the Technical & Allied Workers Union (TAWU) were victorious on March 29 when high court judge Justice Raulston Glasgow ended a near 40-year battle on their right to benefit from the pension that is provided for them in the Grenada Constitution.

Justice Glasgow struck down the Pension Disqualification Act that was passed by the 1979-83 left-leaning People’s Revolutionary Government (PRG) of the late Prime Minister Maurice Bishop, which sought to outlaw state pensions on the establishment of the National Insurance Scheme (NIS).

Attorneys Jimmy Bristol, QC, along with former Attorney General Cajeton Hood and Ruggles Ferguson attended the session with the IMF, along with the heads of the unions and several other members of the trade union movement on the Zoom platform.

According to a well-placed source, the IMF was empathetically told that they should not be talking to the unions because “we have no relationship with them.”

He said the team from the fund was reminded that their relationship is with the government of Grenada and on the issue of the pension payments “we have a court judgement after the government refused to negotiate and forced us to go to court – there is nothing to talk about.”

He insisted that this is a court issue involving lawyers and that is the practice in the legal profession, the government ought not to be speaking directly to the trade unions but instead the negotiations should involve the attorneys representing the various parties as the proper course of action.

“It is the lawyers to negotiate from thereon. So it was a very sneaky way by Keith (Mitchell) to tell the unions to come let us talk…,” he said.

The source disclosed that the public sector unions are not interested in any engagement with the Social Partners Grouping along with the Advisory Committee, headed by former Permanent Secretary in the Ministry of Finance, Dr. Linus Spencer Thomas on the pension matter as being advanced by government.

“…There is no talking with the Social Partners. No, no, we are going straight to the government. It is us as lawyers and the AG who went to court. That’s how judgments work.

The source pointed out that as far as the legal representatives of the public sector unions are concerned the next stage is for the lawyers to discuss the terms of the pension payments, and that if the regime in St George “wants to engage us with the methodology of payment it is allowed according to law – that is where we are.”

The lawyers reportedly sent a letter to Attorney General Dia Forrester on Wednesday reminding the government of the Glasgow judgement and asking about the methodology and timing of payment.

“We invited them to tell us how and when they’re making the payment – that is all we are interested in so we are waiting to hear from the government now,” the source said.

THE NEW TODAY understands that the letter was hand delivered to AG Forrester and the unions expect her to bring the matter to the attention of the Minister of Legal Affairs, Kindra Mathurine-Stewart who should take it on Monday to Cabinet for consideration.

The time allotted to government for filing an appeal in the case is now overdue and the administration has already stated publicly that it will not appeal the judgement.

According to the source, the government has already done a summary of the estimate of what they think the pension payments will cost the State and gave the figures to the IMF and not the unions involved in the issue.

“Very ashamedly… they haven’t even sent a copy to the unions so we write and ask them for a copy,” he said.

He added that government should have all the details of the persons who qualified for pension payments over the years through the Public Service Commission (PSC) and other agencies of the State.

Prior to the meeting with the IMF, a source close to the unions said it appeared to them that the Fund wanted to engage them because the NNP administration might have given “conditional commitments” to the Washington-based financial institution in order to get their support because the IMF will not approve the payment of all these monies at one time.

“The IMF will support a phased payment based on agreement as Grenada is now forced to go outside of the GDP debt ratio.”

“…The IMF will want to have assurances that the other side (the Unions) who are the recipients of the money will be satisfied with such an arrangement.

The source said it is obvious that Prime Minister Mitchell only set the June 23 date for the upcoming general election after he got certain assurances from the IMF that they “will work with him” on resolving the pension payment issue with the unions.