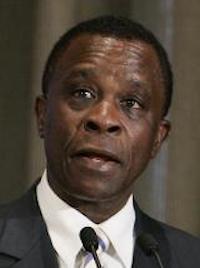 Grenadians will go to the polls on June 23 to elect a new government to run the country for the next five years.

The date was announced Saturday night by Prime Minister Dr. Keith Mitchell at a public meeting of the ruling New National Party (NNP) held in Telescope, the heartland of the St Andrew South-east constituency of Education Minister Emmalin Pierre.

In an address just under half-an-hour, the Prime Minister told the large gathering of party supporters that he has already advised Governor General Dame Cecile La Grenade to issue the Proclamation to dissolve Parliament with effect from Monday and to issue the Writs for the Elections on the following day.

He told Grenadians that they will be given only one day “to try to register if you ain’t registered yet (to vote on Election Day) – that is Monday alone”.

He disclosed that the publication of the writs will be done on Wednesday, May 18 in keeping with the requirements of the Representation of the People’s act.

Dr. Mitchell announced that Nomination Day for the elections will be June 1, the members of the Security Forces including the Royal Grenada Police Force (RGPF) will cast their ballots on June 20 and three days later it will be the turn of an estimated 84,000 Grenadians to go out to the various polling stations.

He urged the NNP supporters to return the party to power because “if you do the right thing (on Election Day) we feting Thursday, Friday, Saturday and Sunday.”

“Let tonight be the night that we renew our hope in the future. Let tonight not be remembered just as a campaign rally, let it go down in history as a serious benediction,” he said.

Dr. Mitchell has been the longest serving Prime Minister of the country with three clean sweeps at the polls in 1999, 2013 and 2018.

The Prime Minister reminded NNP supporters that their support for the party in the upcoming general election “will be a signed cheque to destiny.”

“When you vote you’re putting your signature on that cheque – it means that you have affixed your signature to a project which will invest per year $100 million dollars for a hundred thousand people.”

Dr. Mitchell did not elaborate on the initiative but promised to do so in the coming weeks on the campaign trail.

Saying once again that General Election 22 will be his last time on the battlefield, he said that the upcoming campaign “is for me, my one for the road.”

“…I mean it,” said the Prime Minister who has made similar statements in several previous elections.

According to PM Mitchell, he believes the NNP has built a team over the years to take the process forward without him at the helm.

He appealed to the electorate “to keep this nation in the safest hands” which is the NNP theme for the election campaign.