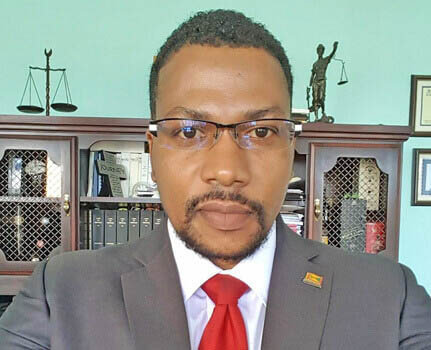 Female high court judge, Justice Agnes Actie has ruled against a local insurance company that was refusing to honour an agreement with a motor vehicle owner that was one of its clients.

Vehicle owner Selwyn Redhead was forced to seek legal redress after NEWIM tried to avoid ownership of a policy of insurance signed with him on the basis of non-disclosure or misrepresentation of a material fact by the policyholder.

The issue arose after the vehicle got into an accident and the insurance company did not want to honour any financial liability on the grounds that Redhead was not the material owner of the vehicle as the necessary transfer of ownership was not recorded in Inland Revenue even if he had purchased it from the sellers.

Redhead purchased the Vehicle from Cosmos Williams and Richard Steele for $13,500.00, and upon purchasing the vehicle paid the relevant fee at the Inland Revenue Department(IRD) and signed the appropriate transfer form.

However, the previous owners did not go into IRD to complete the transaction in full.

NEWIM claimed in the case that Redhead did not disclose this information to the company when it entered into the policy agreement with him.

As a public service, THE NEW TODAY reproduces the decision handed down by the judge in which NEWIM was held liable:

JUDGMENT
[1] ACTIE, J: This claim raises the issue as to whether the claimant is entitled to avoid a policy of insurance on the basis of non-disclosure or misrepresentation of a material fact.

(1) A declaration that it is entitled to avoid the policy of insurance dated 12th May 2011 and any judgment given in relation to the motor vehicle accident which occurred on the 10th day of October 2012, between motor vehicle registration numbers PAD985 and PAA680 on the ground that the policy was obtained by the non-disclosure of material facts and/or by the representation of facts which were false in some material particular.

[3] Under a policy of insurance dated 12th May 2011 which was effected over vehicle registration number PAA680 (hereafter “the Vehicle”) the defendant was insured by the claimant company. By certificate of ownership obtained on 11th January 2016, however, the actual registered owners of the Vehicle at the time the policy was effected were Cosmos Williams and Richard Steele, not the defendant. Nevertheless, evidenced on the claimant’s Private Motor Car Insurance Proposal form for the said policy (hereafter “the proposal form”), the defendant attested to the Vehicle being registered in his name for the purposes of insurance.

[5] For this reason, the claimant claims that it is entitled to avoid the policy and any judgment given in relation to the Vehicle pursuant to Section 14 (3) of the Motor Vehicle Insurance (Third Party Risks) Act Cap 202. This is in light of a collision that occurred during the currency of the policy between the vehicle registration number PAD985 owned and driven by Nigel Dexter Noel and the said Vehicle, driven by Mark Duprey at the time, for which the said Nigel Dexter Noel, on 9th November 2015, issued an action in the High Court against the registered owners and Mark Duprey, claiming damages for loss and damage as a result of the motor vehicle accident.

Defendants’ case
[6] The defendant contends that at all material times he was the owner of the Vehicle pursuant to the Motor Vehicle Insurance (Third Party Risks) Act. He states that he purchased the Vehicle from Cosmos Williams and Richard Steele for

$13,500.00, and that upon purchasing the vehicle he paid the relevant fee at the Inland Revenue Department and signed the appropriate transfer form.

[7] The defendant denies non-disclosure since he paid for the car and was issued a receipt. However the receipt is not before this court. He states that the vendors who sold the car had to sign the transfer form to complete the transfer, and the vendors only completed the process after the accident had occurred. The defendant states that he honestly believed himself to be the owner and/or registered owner of the Vehicle by virtue of him paying the relevant transfer fee and possessing the vehicle.

[8] The defendant further contends that the non-disclosure was not material in that it did not, nor could it have, influenced the judgment of the claimant in determining whether to take the risk and for what premium and on what condition. Any nondisclosure would have been caused and/or contributed to by the servant and/or agent of the claimant to properly read, explain and/or give the defendant the opportunity to understand and interpret the nature of the questions in the said proposal form. Further, any mistake on the said proposal form must be attributed to the claimant’s servant and/or agent who filled out same. The defendant states that at no time was any question on the policy explained to him nor was it asked whether he understood the questions put to him. At no time was he advised of his right to seek and obtain independent legal advice prior to providing the answers to questions asked to him by the claimant’s servant.

[10] The defendant counterclaims for:

(1) a declaration that the claimant is entitled to honour the policy of insurance dated 12th May 2011 and any judgment in relation to the motor vehicle accident which occurred on 10th October 2012 on the ground that the policy was not obtained by material non-disclosure or by representation of fact which was false in some material particulars;

(2) General damages for negligence and/or breach of statutory duty;

(3) Interest; such further and/or other relief as the Honourable Court deems just and Costs.

[11] An assured owes a duty of disclosure to the insurer, which duty extends only to facts which are known (or deemed in law to be known) to one party and not the other2. The learned editors of MacGillivray on Insurance Law set out the duty as follows:

[12] Furthermore, the learned editors of Halsbury’s Laws of England state:

[14] It is the defendant’s position, firstly, that he paid for the Vehicle in the sum of $13,500.00 and thereafter took possession of same. He states that he was not aware that only one of the prior owners signed the prescribed form transferring ownership of the Vehicle to him at the time of taking out the policy. The defendant also argues that the Motor Vehicles Insurance (Third Party Risks) Act makes provision for a person in actual charge or possession to be subscribed as an owner. This latter argument does not hold weight as this provision in the Act relates solely to unregistered vehicles. In the instant case, the Vehicle was registered, albeit in the previous owners’ names.

[15] It must be stated that the defendant provides no documentation or supporting witness to corroborate his above stated version of the facts. Moreover, the defendant admitted in cross-examination that this was not his first time owning and insuring a motor vehicle. In fact, he owned, registered and insured three vehicles before the Vehicle in issue.

[18] Taking the facts as they appear, therefore, the defendant had a duty to disclose that he was not the registered owner of the Vehicle. However, the defendant at trial states that the proposal form was completed by the claimant’s agent. He states that he has had three vehicles insured with the same company. He indicated that he was aware of the process to obtain the registration and transfer form from the Inland Revenue to complete the change of ownership. He admits that the Inland Revenue would not have accepted the form unless the seller signs the transfer form.

[19] Michelle Chase, a witness for the claimant, states that she approved the insurable risk based on the answers given in the proposal form. In cross examination she was asked whether it was the responsibility or portfolio of the customer service representative to explain the meaning of the term “registration” on the form in which she responded in the affirmative. Ms. Chase was further asked whether proof of registration was necessary, she stated that the response on the form was sufficient. It is the evidence that the company didn’t check whether the defendant was the registered owner at the time of the policy was issued. This was only done after the accident.

[20] Patsy Lewis, a witness for the claimant, in cross examination states that she was not a customer service representative but assisted whenever there was shortage of staff. She states that it is now a normal practice and a requirement for persons requiring coverage to produce evidence of registered ownership at the Inland Revenue but she could not recall what was the practice in 2011 when she completed the form for the defendant.

[21] It is defence counsel’s submission that the defendant believed the phrase ‘registered in your name’ meant that he had paid the prescribed fee at the Inland Revenue and signed the relevant form. The defendant avers that it was not explained to him that any other procedure was required before he could be the ‘registered owner’ in the sense that the claimant alleges.

[22] The proposal form question of whether a vehicle is registered in an assured’s name is not a complicated one. The term “registered” is given its ordinary meaning with respect to vehicle registration. Further, the policy in issue is not the first time the defendant has insured the Vehicle, and he was never denied the right to obtain legal advice in relation to obtaining insurance over same.