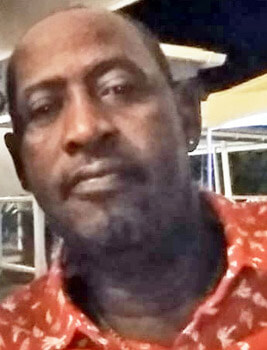 Hyacinth “Slim” Maturine, the embattled father of Legal Affairs Minister, Kindra Maturine-Stewart has broken his silence on the manner in which he was held in a police cell on the sister isle of Carriacou for up to seven hours before bail was granted to him as opposed to the few minutes granted his son who is considered as the aggressor in the incident.

“I believe that was delay tactics,” the 64-year old man told THE NEW TODAY in the wake of public criticism over the handling by the police, of the family feud that turned nasty and bloody just over a week ago.

The incident was sparked by an incident in which Slim’s ex-wife, Maureen Scott came onto his property without permission and cut a running vine on a fence that he had erected to keep the two families apart.

One of his sons with Maureen who was around allegedly attacked the father by throwing him onto the ground and kicking and cuffing him.

The elderly Maturine and his Bajan-born wife, Linda appeared before a Magistrate Court on the sister isle Wednesday to answer charges laid against them in connection with the incident.

The police on Sunday charged Ken Maturine, one of his sons for beating him up which resulted in three stitches to his face.

“Slim” said he was called by the police on Friday to come to the station the following day to be charged but he chose not to go at that time due to suspicion that the lawmen were planning to lock him up in a cell for the weekend.

The father pointed out that it is common knowledge in Carriacou that when the police detain someone on a weekend the person is locked up until Monday when bail is granted.

He also alluded to fear that the police on the sister isle were taking the side in the family feud of the Legal Affairs minister who is also the elected Member of Parliament for Carriacou & Petite Martinique.

According to Slim, he had “a friend” on standby to take his bail but that did not happen as quickly as he thought but took several hours as the lawmen held him in custody in a cell.

“I don’t think that I was that frightened – I was in a more peaceful, joyous mood. I even tell myself I come like (Nelson) Mandela (the late South African Nobel Peace prize winner),” he remarked.

Slim also said that the police were not hostile to him while kept in the holding cell.

“No, no. I was properly looked after. I can’t say anything with the holding section – the people (police) were very generous,” he remarked.

The elderly Maturine also told THE NEW TODAY that he is looking to see how the police will handle a part of the incident in which a vicious dog with a huge jaw was let loose from the house of his ex-wife and bit him on several places on his leg.

He alluded to a law on the statute books pertaining to the owners of bad dogs including the fact that they need to have a license to keep them.

Slim said: “The dog … is right on the main road with people passing up and down, not me alone this dog bite in the community,” he remarked.

Asked if he knew who let loose the dog to attack him, the elderly Maturine said: “No, I can’t really say who because I was on the ground. My whole face was covered in blood so I couldn’t see”.

There are reports that Ken Maturine often takes the dog with him as he is engaged in security work on a small agricultural farm at the Belair Propagation station on the sister isle.

The father has also lodged an official complaint with the police that his big son ran after his wife on his property with a cutlass as she tried to make her way into their home to telephone the police about the incident.

“The statement (Tuesday) stated all these things,” he said.

The elderly Maturine was asked to comment on reports that his ex-wife was creating trouble on the property where he has a house because she wanted to get him back since he had fathered all seven of her children before they divorced over 15 years ago.

“I heard that quite from America too Saturday – this woman still has this tabanca and can’t let loose (up) and move on. That is a stone thrown behind my back – it sink and I can’t even find it.”

The Maturine family members are due back in court late March 2022 for a hearing into the multiple charges laid by the police.

Attorneys Nazim Burke and Arley Gill are the two lawyers representing the elderly Maturine and his current wife.