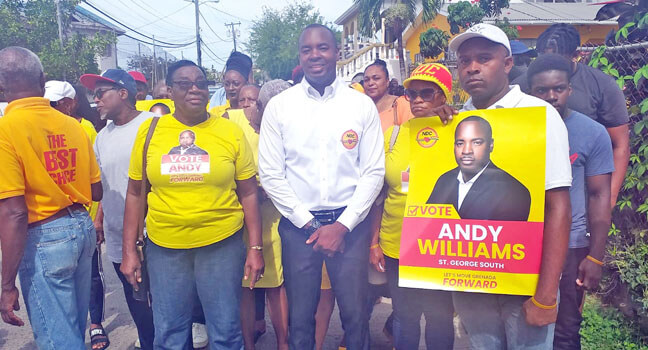 It was 10.01 a.m on Monday when Andy Williams walked out of the Parliamentary Elections Office at the Limes in Grand Anse, St George.

Williams was greeted by several supporters who came to witness the event against the backdrop of fears that he might have been arrested by the police based on information coming from Prime Minister and Minister of National Security with responsibility for the Police, Dr. Keith Mitchell.

Two week ago, the Prime Minister told a public meeting of the ruling New National Party (NNP) on the Morne Rouge playing field that it was quite likely that Williams will not be able to file his Nomination papers but that the government candidate, Norland Cox, will definitely be in the line-up.

He said: “We may have to wait until Nomination Day on June 1st to know who else is running for the seat in South St George. Ah know Norland running but I don’t know if the other one go make the tape. Ah doh know – ah hearing all kinda things tonight from other people about the police and the police. Ah doh know but ah know Norland running. I can stand here tonight and vouch for the character of Norland Cox, sisters and brothers”.

THE NEW TODAY was told that NDC never took the threat of the Prime Minister seriously but had party members, former candidates; Rae Roberts and Terrence Forrester at the PEO office in case they were needed.

Williams was seen with tears in his eyes as he walked out of the PEO office and started to mingle with the crowd that came out to show support for the first-timer in frontline politics in the country.

Our reporters said that Williams was seen “greeting and meeting all the supporters” who came out on his behalf.

“Andy has walked out of the Parliamentary Elections Office a free man and will be contesting the seat for South St George in the upcoming general election. Andy is out and ready to run,” he remarked.

The NDC candidate is squaring off in the battle against another newcomer in parliamentary election, Infrastructure Development Minister Cox who is from the sister isle of Carriacou.

In brief remarks after filing his paper, Williams promised that if he got the nod to sit in Parliament, he would seek to represent all the residents in the constituency and not only supporters of Congress.

“I am saying this from the bottom of my heart,” he said as one woman in the background shouted, “That’s right”.

Another female supporter was heard saying: “Andy, you are for the people. Andy, you are for us. Andy, we feel your pain, Andy we love you and you feel our pain as a people. This has nothing to do with colour this morning – but you love us, you have been there with us since before and you still standing with us. We love you Andy.”

“Having everyone come out today is very emotional to me,” said Williams, the owner of a chain of small supermarkets that operate under the brand “Hot Spot”.

The Congress candidate thanked his mother for giving him all the support after he took the decision to join forces with NDC and not the ruling party that had approached him to run on its ticket in the south of the island.

“At first when I got involved I didn’t know what she would have said,” he said of the mother who is believed to have been a long-standing supporter of NNP for years.

According to Williams, the only regret that he has at the moment is the fact that his father, a former musician with the Royal Grenada Police Force musical band and who passed away a few years ago is not around “to see this moment.”

Among the persons seen in the Andy Williams contingent is former NDC Executive member, Faye Thompson, who is back after joining forces with THE GRENADA MOVEMENT (TGM) of former Ambassador Dr. Patrick Antoine which has apparently gone out of existence within months of its launching.

THE NEW TODAY understands that Thompson is playing a key strategic role in Williams’ bid to win the seat for Congress.