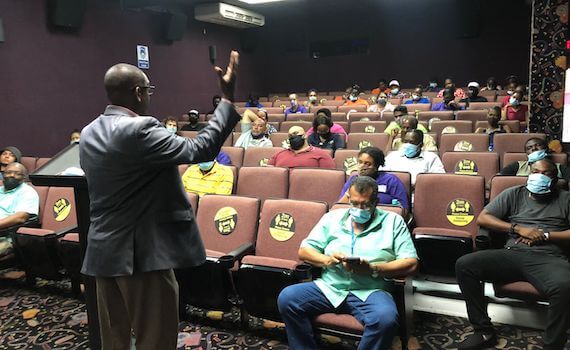 Businessman Kent Joseph has announced the closure of his popular Homemade Bakery in the Tanteen area of St George along with four other businesses in the wake of the coronavirus pandemic.

Speaking to THE NEW TODAY Friday, Joseph said that two of his businesses, the Bakery and the Chef Castle restaurant in the south of the island have been compromised with some staffers being exposed to the deadly virus.

He said that four staff members have contracted Covid-19 with one of them being in “critical condition” since last night at the St. George’s General hospital.

According to Joseph, who is known to be pro-vaccine for the coronavirus, about 14 other employees with his various businesses have been exposed to the virus.

He said that the worker who ended up at the hospital was on vacation but had somehow contracted the virus before going off the job.

“…The person is on vacation but as far as I know they might have had symptoms while they were in the bakery – they only went on vacation from Saturday gone,” he told THE NEW TODAY.

The businessman disclosed that he conducted rapid tests for the virus this morning with a number of his employees and found that another one at the bakery is positive with Covid-19.

“I made the decision about an hour ago that the bakery should be closed until further notice,” he said.

Joseph dropped hints that it could be back in business sometime next week.

“I might close it for a week but I just want to ensure that those who have tested negative will not become positive – I want them to return to work next week,” he said.

THE NEW TODAY understands that those workers who tested negative for the virus will be re-tested again in the next two to three days.

In the case of the Chef Castle restaurant, Joseph said that it was closed to the public since the beginning of the week because two workers there tested positive for the virus.

The businessman stated that the workers struck by Covid-19 fall into the category of the unvaccinated.

According to Joseph, he has been trying to educate his workforce on the need to get vaccinated in order to offer greater protection for themselves against the virus.

“I brought in Dr. (Francis) Martin (former Chief Medical Officer) to conduct a session with us. I have been pro-Vaxx from day one and more so life before freedom or liberty,” he remarked.

“I, Kent Joseph will support if the government decides to go mandatory vaccination – I will support that because I am for life before choice and freedom at this stage, I am putting life first,” he said.

Joseph was also forced to close his gym, and HomeMart and Kid’s Palace operation at Excel Plaza in the south of the island in keeping with government’s directive that all non-essential businesses will have to close their doors for a 2-week period due to the coronavirus crisis on the island.