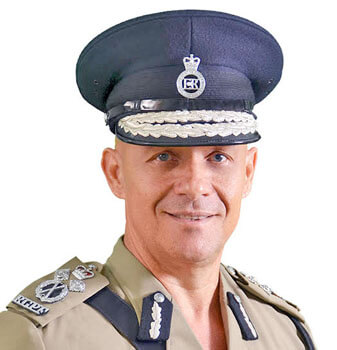 In a quite revealing admittance, a high-ranking police officer has charged that “outside forces” are at work within the Royal Grenada Police Force (RGPF) and manipulating the security outfit for their own selfish reasons.

The top cop said that several of the top officers in the police force have “good intentions” but was quick to add that “some of us are compromised or manipulated by outside forces.”

“It’s a divide and rule,” he told THE NEW TODAY.

According to the senior police officer, instead of managing or leading the police force, those now running the organisation “are just leading based on directives but not on strategies or principles of our own.”

“…We are just sitting there and waiting on directives and that is what we call leadership,” he said.

The police insider who spoke on condition that he was not identified claimed that those running RGPF “are not running a tight ship as we should because it is influenced from outside.”

“I am sure you read me when I say outside forces,” he quipped.

The senior cop pointed out that there is constant denial about political interference in the affairs of the police force “from certain circles” but he can vouch that this is definitely the case.

“…The population has to be naive to think that this is not so,” he said.

The high-ranking officer cited the diminishing role of the Public Service Commission (PSC) which is enshrined in the Grenada Constitution as the main body that should control the affairs and conduct of public officers through a Supervisor.

He said that in the past, a police officer would write a letter to the commission through the office of the Commissioner of Police but that right has now been taken away in recent times.

“For example in our organisation, it is from the worker (police officer) to the Commissioner (of Police) and to PSC but nowadays somewhere along the line it was changed.

“Right now the letter will read you are responsible to the Permanent Secretary in the Ministry of National Security through the Commissioner of Police.

“So, I don’t understand why they are saying that there is no interference, it is simple – the route now is longer than before (to get to PSC).”

Several police officers have taken the Commissioner of Police to court after they were overlooked for promotion over the years.

There have been reports in the local media that some promotion letters were changed on reaching the Ministry of National Security before reaching the office of the PSC.

Speculation is also rife that preferential treatment is given to those officers known to be aligned to the ruling New National Party (NNP) of Prime Minister Dr. Keith Mitchell when it comes to promotion within RGPF.

The top cop also commented on a situation in which a member of the Police High Command has allegedly raked up over 400 days of holiday leave and is still kept on the job instead of taking all the leave due to him as he is nearing the age of retirement within a matter of 15 months.

He raised concerns over the manner in which the force is being manipulated as there are several officers who have been asked to proceed on leave and even instructed to take further leave because of the excess leave that they have accumulated over the years.

“The question that a lot of people asking is – why some people are asked to take excess (leave) that they would have accumulated when others who have much more can stay on the job without anybody telling them to proceed on leave?”

According to the officer, an article which appeared in THE NEW TODAY about three weeks ago on the issue was correct about that senior member of the High Command who should be on leave given that he had in excess of 400 days leave due to him.

He said that if anyone choose to deny the information as published in the newspaper, the individual is only doing so as part of “a cover-up.”

“Indeed, the gentleman has about the leave that is being claimed,” he added.

The top cop made mention of a case involving an Inspector of Police attached to the Traffic Department who applied for some leave and when he got the leave they directed him to apply for additional leave and he is currently on extended leave from the job.

He is adamant that the leave due to the member of the High Command who is known to be aligned to the ruling party is around the 400 days mark.

“It could be more,” he quipped.

He said the last set of leave taken by the High Command member was 40 days and it was authorised by the PSC and circularised within RGPF.

“Everybody was querying why 40 days out of 400 days when you are allowed to accumulate 18o days as maximum,” he remarked.

“So if he has 400 (days leave) then very soon maybe around March, the gentleman should be proceeding on leave if he has to enjoy all the leave that he accumulated,” he said.

The top cop went on: “There is something afoot to maybe either keep him on and maybe the possibility of paying him off for the leave”.

The officer said that some members of the force are currently “up in arms” with what appears to be preferential treatment being given to this member of the High Command when compared to other officers.

He indicated that a lot of police officers did apply for leave due to them but letters were sent out to them thereafter requesting that they take additional leave due to the amount of days accumulated in leave outside of the regulation governing the operations of the force.

He stated that some of the letters came from the controversial High Command member himself given his portfolio in the force.

“If it is so with him, why force others to take leave when some are allowed to remain? If he was to take the leave that he accumulated he should be leaving not too long from now. Almost every day you will hear police officers querying – why is this so?”