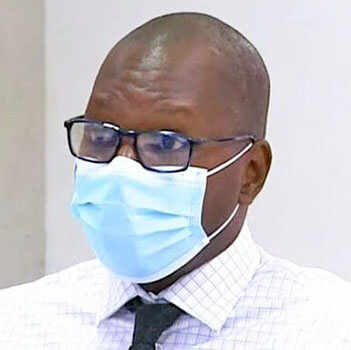 Acting Chief Medical Officer, Dr. Shawn Charles says resources would be more effective at the community level where the rapid spread of COVID-19 infection has been occurring

The New National Party (NNP) government of Prime Minister Keith Mitchell has taken the controversial decision to discontinue COVID-19 testing for fully vaccinated individuals upon arrival at the Maurice Bishop International Airport (MBIA), unless they display symptoms of the virus, amidst a COVID-19 infection rate of “less that one (1) percent” among arriving passengers.

“The testing now becomes targeted,” said the Acting Chief Medical Officer in the Ministry of Health, Dr. Shawn Charles, who explained, that “health screening will continue,” as he announced the change to the COVID-19 protocol at MBIA, during the weekly post-cabinet briefing in St. George’s on Wednesday.

According to Dr. Charles, who disclosed that over “6, 600 PCR, and many more antigen tests,” have been conducted at MBIA, and having detected far less than one (1) percent of positive cases entering the country,” the resources used at the airport would be more effective at the community level, where most of the positive cases have surfaced.

“We believe that it is wise for us to use those resources where they are needed most, and since the disease is spreading actively in our community (and) we need to prioritise,” the acting CMO told reporters.

“This is a disease that is in almost every community in Grenada, affecting almost every household…(and) what we want persons to understand is that the infection is spreading from person to person within the community. This, is where the disease is spreading, and this is where the Ministry of Health wants to focus its resources,” he said.

Dr. Charles, who confirmed that all other protocols for vaccinated and unvaccinated travellers remain the same, acknowledged that the removal of the routine COVID-19 testing at MBIA would leave room for gaps when it comes to identifying a-symptomatic travellers.

However, the senior health official defended the move stating that “no system is perfect.”

“…Even with testing a-symptomatic persons can come in because it depends on the stage of infection,” CMO Charles said in response to questions posed on the issue.

Grenada is among 22 nations recently added to the United States Center for Disease Control and Prevention (CDC) level 4 (four) category, which represents a rating of very high risk for COVID-19 due to the spike in COVID-19 cases, and community spread detected towards the end of last year.