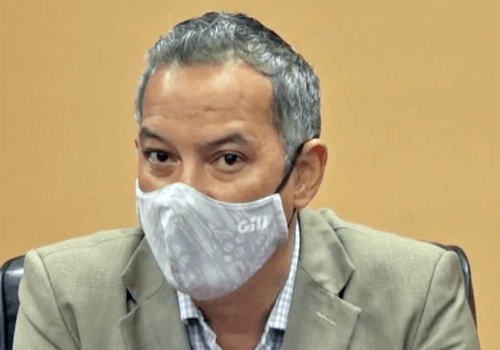 If the current trends continue…we believe that by April 4, the first Monday in April, the final bits of (COVID-19) restrictions can be and should be removed…

Those were the words of assurance coming from Health Minister Nickolas Steele, during Tuesday’s post-Cabinet press briefing in St. George’s, where he announced the Cabinet’s decision to consider lifting the State of Emergency (SOE) and remove the COVID-19 protocols in place for the last two (2) years.

According to the senior government minister, the decision is “based on information received and consultation with our various national, regional and international partners.”

Minister Steele disclosed that the intention is that “between now and April 4 that the state of emergency (which is scheduled to expire in May) could be removed by the Governor-General.”

This, he said, would see the removal of the vaccine mandate, which he dubbed “vaccine differentiation” for entering Grenada, as well as entering places, and the mask mandate, if the current low trend of low test positivity rates continues.”

However, Minister Steele made it clear that this would not apply to private establishments, whose management and owners “have a right to dictate the conditions for entry.”

“We are very much aware of places where persons say you must wear a full shirt or you must wear shoes et cetera to enter (and) we respect, and would not interfere with any institution or private establishment saying that they still would want to have the interest of their patrons, employees or their members that they must be vaccinated to enter,” he said.

“That would be the right of the individual to insist on that…because we are not out of the pandemic, we are trying to get to that new norm with the pandemic,” he added.

There have been 13, 690 infections, and 225 coronavirus-related deaths reported in the country since the pandemic began just over two (2) years ago.

The island has since experienced two (2) major outbreaks that have led to community spread of the deadly virus.

Although only one-third of the population (33%) has been fully vaccinated, acting Chief Medical Officer (CMO), Dr. Shawn Charles said that over the last few months, trends have shown a low positivity rate, with “below 5%” recorded on most days in March so far,” with “less than 10 individuals testing positive daily.”

Dr. Charles, who spoke of there being an “ample supply of vaccines available,” reiterated the call for persons to get vaccinated, noting that “vaccines have been proven effective at controlling the pandemic,” and, will aid in “limiting the pressures on our hospital system, and our healthcare system.”

The announcement by the health officials comes amidst ongoing massive upsurges in cases, particularly in Asia, and some regions in Europe and approximately three (3) months after the milder omicron strain of the virus was detected on the island.

Minister Steele sought to give assurance that the Ministry of Health will continue to monitor the COVID-19 situation globally, and decisions will be made accordingly.

When the first major outbreak of the virus occurred in August last year with the “highly contagious’ delta variant, which was imported into the island and led to several hospitalised cases, Minister Steele had announced plans to establish an ‘Ethics Committee’ to decide who lives or dies, as the understaffed hospital services were under pressure to deal with an increase in COVID-19 and regular patients simultaneously.

Responding to questions posed by THE NEW TODAY on the committee, the minister said, “there was never a need for it (the Ethics committee)” adding that “right now, I don’t see that there is ever going to be a need for asking health care professionals to decide who gets a bed or so…”

He pointed to the recent collaboration established with the St. George’s University (SGU), which allows for testing for COVID-19 variants on the island, and the commissioning last week of two (2) 40-bed field hospitals, in collaboration with the United States Southern Command’s Humanitarian Assistance programme, among major accomplishments that are expected to enhance the island’s disaster management capacity, and the Ministry of Health’s ability to handle a casualty or mass infectious event.

“We have never been as strong as we are now with respect to the ability to deal with a pandemic, to deal with a mass infection situation, and we continue to strengthen even though we believe we are on the downside, and hopefully at the end of this pandemic,” he remarked.

Minister Steele suggested that once all goes as planned, and the restrictions are lifted on April 4, the “hand sanitisation upon entry is a good practice that will continue as “it can prevent so many other infectious or contagious diseases.”

The Health Minister is also of the view that “mask-wearing for vulnerable individuals when in public, or persons who are experiencing symptoms is also something that we could consider holding on to.”

He also identified “vaccination within the healthcare sector for the various contagious diseases where vaccines are available as a very good practice that should be maintained.”