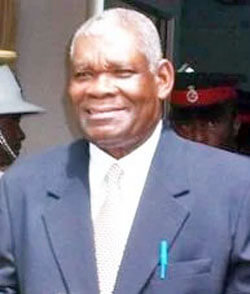 For the first time, a top figure in the 1979-83 Grenada Revolution has disclosed that former deputy Prime Minister Bernard Coard had made a bold move to turn the then ruling New Jewel Movement (NJM) into a full-fledged communist party.

Speaking to THE NEW TODAY last Saturday, former Army Commander General Hudson Austin who was a member of the Central Committee of the party said that Coard came to a meeting with a proposal to change the party’s name from NJM to the Communist Party of Grenada (CPG) but it was defeated by other members.

“What I do know he wanted to declare NJM a communist party. I know about that one – it got slammed down so blasted fast he was surprised,” he said.

According to Austin, he could not remember specifically the forum in which the former Number Two man in the ill-fated revolutionary process tried to get approval for the party to move into the official communist orbit but said it could have been at a General meeting of NJM members.

He said: “That was voted down I think in a General Meeting. I know he raised it one morning in some meeting to declare the NJM the Communist Party of Grenada. That get lash down so fast – that is the fastest cane field I see get cut down.”

Coard has been branded as the mastermind of the power struggle in the NJM-led People’s Revolutionary Government (PRG) that culminated in the execution of Prime Minister Maurice Bishop on October 19, 1983 at army headquarters at Fort George on the vexing issue of Joint Leadership of the then ruling party.

Coard who is now living in Jamaica has repeatedly turned down approaches made by journalists to question him on his role in the bloody events in Grenada some 38 years ago.

In the wide-ranging interview, General Austin also commented on Bishop’s relationship with the former communist leader of the now defunct Workers Party of Jamaica (WPJ), university professor, Dr. Trevor Munroe who is said to be ideologically close to Coard.

Several leading leftist figures who supported Bishop in the October 1983 crisis have often pointed an accusing finger at Munroe as one who allegedly advised Coard on the bitter internal party feud in the NJM.

Austin said: “…Maurice wasn’t very keen on fellahs like Trevor Munroe and their style of politics. Even though Maurice went for revolutionary politics I don’t think that Maurice wanted the country to stray from its path of development. We take aid from Cuba, we take aid from here (and there) but we continue with our system – people do that all over the world.”

Related:  General Austin: The Revolution “detained too much people”

According to the former army boss who served as Minister of Public Utilities in the PRG, many countries around the world receive assistance from communist China but do not change their system just to please Beijing.

He said that what Coard wanted to do is change the system in Grenada and turn the island into an official communist state.

Austin admitted that there were ideological differences between Prime Minister Bishop and his deputy on the way forward with the Grenada Revolution and said it can best be described as an “ideological war” between the two revolutionary leaders.

He said: “…Bernard Coard wanted to declare NJM the Communist Party of Grenada. Could you see that happening in them times there?

Austin told THE NEW TODAY that the Marxist-Leninist doctrine only started to gain a foothold in NJM on the entry of Coard and his radical hardline group known as the Organisation of Revolutionary Education and Liberation (OREL) into the party.

“I think that (Marxism) came about with OREL – the coming into being of OREL. I can’t remember any discussion anywhere in the party about Marxism/Leninism until OREL,” he said.

The army chief indicated that he never got involved in the study of communism within the NJM but was fully aware of the existence of study groups but never took part.

“I wasn’t in their dam thing – I wasn’t in any OREL thing. No way – I was not in any of their study groups.

Asked if Bishop was part of the study groups in Marxism/Leninism, General Austin said: “I can’t say if Maurice used to be in their study groups or not. I know they used to read a lot of books about Marx and Lenin and them fellahs.

Austin also said he did not believe they wanted him in the study group since he had a background as a lay preacher with the Methodist church in Grenada.

THE NEW TODAY was told that those communist aspirants involved in the NJM study groups also used a book written by Dr. Munroe called the ABC of Communism.

After the collapse of the Grenada Revolution, head of the Interim Government the late Sir Nicholas Brathwaite disclosed that the Jamaican contingent of the Security Forces that helped in the overthrow of the Bishop Killers had brought to his attention a number of documents found on the island relating to the internal business of the NJM.

Brathwaite said that one of the documents revealed that Munroe had planted persons in the telephone company in Jamaica who were used to often provide him “a safe line” to discuss State matters with the Revolutionary leaders in Grenada.